Early Wednesday morning, it was announced that the American public unpopularly chose to elect Donald Trump as their 45th commander-in-chief, ushering in a demagogic nightmare period wherein people are already being attacked and assaulted for their difference (TW: racism, misogyny). Many people are understandably responding with grief, fear and general anxiety to the symbolic (and soon to be material) victory of a racist, misogynist Grand Ole Party monster, and some are even … organizing! Protests are springing up across the nation in the wake of Trump’s election. After the public demonstration of your disturbed sentiment, though, you may be thinking “now what? How are we going to navigate this potential dystopian future?” Well, we here at Media Services have prognosticated your pleas and prepared for you our list of five dystopian films to play in the background while you and your friends gather ‘round the holiday hearth and plan the revolution…

Fritz Lang’s expressionist epic follows a poor working woman, Maria, as she attempts to bridge the widening gap between classes in an industrialist urban dystopia. Produced during the Weimar Republic (a historical period directly preceding the rise of fascism in Europe [remind you of anything?]) and acclaimed for its Bauhaus-inspired art direction, Metropolis was considered tedious by period critics due to its interminable running time and heavy-handed Communist message. Luckily for you, however, its marathon length will provide your burgeoning activist cell ample opportunity (and inspiration!) to brainstorm, edit and pen a cogent manifesto.

Notable for being George Lucas’ feature directorial debut, THX 1138 envisions a future in which emotion is outlawed and controlled through government-mandated drugs and an android police force. Though originally unsuccessful at the box office, the film has since been praised for its minimalist set and costume design, echoing the bleak affective lives of the populace through colorless uniforms and spartan interiors. Play this film for outfit #inspo while you stock up on black nondescript clothing to render yourself indistinguishable from your allies and inconspicuous among the shadows of inevitable global twilight. Now is not the time for fun and flirty accents, unfortunately, so save the metallic mules and faux-fur hotpants for the afterparty. 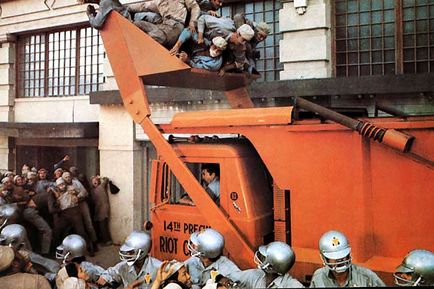 Richard Fleischer’s sci-fi police procedural film depicts an America reeling from the effects of climate collapse; in the year 2022, due to overpopulation, pollution, and depleted resources, much of the world’s population must eke by on processed food rations, of which the film’s namesake, soylent green, is the newest nutritional development. But what could it be made of? Labeled as “melodramatic” and only “intermittently interesting” by critics, the thriller still secured Saturn and Nebula Awards for Best Film in 1973. Regardless of critical response, the apocalyptic foresight of this film is surprising: 2022 is only years away, and our hopes to avoid irreversible climate change are dwindling. Soylent Green is an à propos backdrop for preparing against a potential global resource shortage; we suggest using it as fear-fodder after returning from a successful dumpstering run and while testing out the best way to hide the taste of questionably rotting vegetables in a vegan soup.

Starring former “sexiest man alive” (and current weirdest dad) Harrison Ford, Ridley Scott’s Blade Runner is the epitome of the retro-futurist film-noir genre. Ford plays a bounty hunter tasked with pursuing a group of insubordinate “replicants,” a race of androids created by the Tyrell supercorporation for the purposes of menial labor on off-world colonies. The film itself was met with mixed critical response, but has since become a cult favorite among cyberpunk nerds and vaporwave aesthetes. While the plot is thematically complex and the visuals are arrestingly striking, the real star of the film is Vangelis’ evocative score. That makes this selection a perfect film to have blaring from the living room while you and your comrades sit in the garage very carefully pouring flammable liquids into empty beer bottles and stuffing them with rags.

Perhaps a direct descendent of Blade Runner, Luc Besson’s The Fifth Element follows Bruce Willis as a 23rd-century taxi driver-cum-reluctant hero. Willis’ character is serendipitously tasked with protecting the future of planet Earth after a mysterious humanoid (Milla Jovovich) plops into his cab. The two team up to save the world from impending doom by collecting four mystical stones and uniting them in an ancient alien temple. It became one of the highest-grossing French films in the international box office, and set Jovovich on course to become apocalypse babe par excellence. This film, with its fantastical alienesque character names, is a great choice to have on while you and your group decide upon pseudonyms to thwart the impending increase in government surveillance. You can follow the film’s example and just use random combinations of syllables (à la “Leeloo”) or take a note from the punk community and choose something gross (e.g. “Weasel”, “Flea”, “Snot Rag”).

But on a serious note, here are some resources to consult if you’re scared for the future. You’re not alone. Take care of yourself and those close to you.