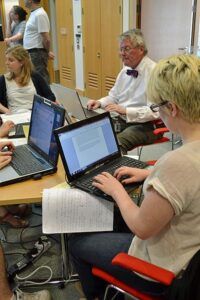 Libraries may also wish to compile a short list of special resources that they have available which could assist researchers. For example: Are there National Historic landmarks in your area, that could use more information in their Wikipedia articles? Your library might have a wealth of books or other research materials which Wikipedians could use to expand those articles. There are many topics where research at a bona fide library would probably be more useful than just doing online web searches for sources. For example: Local history of towns, biographies of notable individuals in your area, histories of schools, local geographical features, or any other topic you can think of.

If I were still working at a public library, I’d happily put in the work to organize an editathon and promote the heck out of it. Think of all of the citations to library materials that would end up in Wikipedia. Want to know more about this old photograph, Wikipedia User? Just head over to your public library!

So the real question: should academic research libraries worry themselves with Wikipedia editathons? If our users aren’t coming to our OPACs, do libraries need to infiltrate places like Wikipedia, Flickr, etc.? Is this kind of activity a worthwhile investment when we are already putting significant resources into developing the next generation resource discovery interface?

For an example of a past editathon, see the editathon event held by the British Library.