Just think—OCLC name authority data inserted in Wikipedia records! But wait, that’s not all—this is a reciprocal project, so those Wikipedia names are also being ingested into the VIAF authority files (social tagging).  If there is a conflict, the bot will note it for human inspection on Wikipedia.

Remember in October how we reported that the IU Society of American Archivists–Student Chapter (SAA-SC) hosted a Wikipedia Edit-a-Thon at the Indiana University Archives? I looked up one of their edited pages and sure enough–the VIAF authority record noted that there was an updated name authority harvested from Wikipedia: 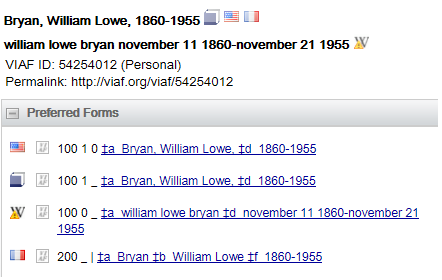 The second part of the Linking Library Data to Wikipedia video is insightful because Max Klein discusses why he helped create the VIAFbot, the value of user feedback, and what went into getting the request for the bot approved by Wikipedia. Merrilee Proffitt discusses how they plan to have the bot seek out other cooperative name authority data projects (ORCID project).

I highly recommend watching these OCLC shorts because they are short, informative, fun, and–thanks to viewing them–I can now pronounce VIAF correctly (Veeeeee F). Thumbs up!