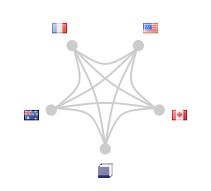 Karen Smith-Yoshimura (OCLC) recently announced that three presentations made to the VIAF Council are available online.

* VIAF Uniform Titles and Multilingual Bibliographic Structure Project
OCLC colleagues Smith-Yoshimura and Janifer Gatenby collaborate to illustrate how uniform titles show the romanization of titles rather than the original script of the work and use Tolstoy’s War and Peace as an example. With some fancy-schmancy data mining from WorldCat they are able to present War and Peace in the original Cyrillic script.

* Scholars’ Contributions to VIAF
Smith-Yoshimura and David Michelson (director of the Syriaca Reference Portal at Vanderbilt) present their new approach to enrich VIAF with contributions from Syriac studies scholars. OCLC Research collaborated with these scholars to enrich VIAF by adding Syriac (a dialect of Aramaic) to existing and new names.

* VIAF and WorldCat, is a presentation by OCLC Research Chief Scientist Thomas Hickey on other ways to enhance VIAF with data from WorldCat. He focuses on WorldCat Identities, which has many names that aren’t in VIAF and looks at possibilities.