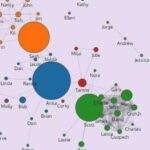 This summer there were two NPR audio stories on data that I found especially interesting and highly recommend:

Nunberg (a regular contributor to Fresh Air) is a linguist at Berkley’s School of Information* and as such he has remarkable insight on the differences between the words Data and Information. This podcast is a bit under six minutes, but he touches on the role of data and information in libraries and in the Google Books project. So, what is the difference between data and information? Listen and find out, folks.

2. Larry Abramson’s Morning Edition story, “How A Look At Your Gmail Reveals The Power of Metadata.”

This six and a half minute audio story is great because Abramson performs one of those trust exercises–he lets a software called Immersion analyze his email and visually map relationships gleaned from people in his email account. Immersion is developed by folks at the MIT Media Lab. One of the designers of the software was able to quickly analyze Abramson’s graphical representation of his email contacts and accurately determine his relationships and when they shifted (like when he started getting serious with his girlfriend).
This is interesting software, but this is something that users voluntarily sign up for, versus having a third party gather data without consent.

*According to their About page, “The UC Berkeley School of Information was created in 1994 to address one of society’s most compelling challenges: enabling people to create, find, manipulate, share, store, and use information in myriad forms.”