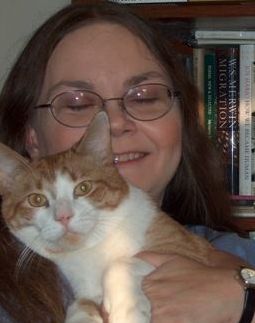 Anne Haines’ journey to DUX is reminiscent of a Homeric epic, in which Anne plays the role of Odysseus and computers play the role of all that stuff that Odysseus has to deal with (you know, like the man-eating Cyclops, and that one goddess who turned all of Odysseus’ buddies into pigs).  She describes her path as a constant bargaining with the machine.  As an undergraduate, Anne took a computer programming course that led her to swear off computers forever.  Upon being abandoned by her project partner, skipping the final project, and receiving the lowest grade she’d ever received, Anne was ready to never face a computer again.  Little did she know…

Anne is now the Library Website Editor in the Digital User Experience (DUX) department.  She is adamant that she is not a coder or programmer and knows no more HTML than your average Library Science student.  She truly thinks of her role as an editorial one, much like a book or journal editor, in which she acts as a bridge between the users and the creators to bring material to people in an accessible and approachable way.  She translates programmer-speak to user-speak and back again.  Her typical day in DUX is never typical, a fact she is perfectly fine with.  Every day is a new adventure, consisting of meetings, committees, and putting out internet fires left and right.  So how did our epic hero go from forever eschewing computers to being the libraries’ primary contact for all things website related?

After completing her undergraduate degree in English, Anne describes her career path as less of a trajectory and more like “being flung from place to place.”  After a brief stint in a bakery she got a job in the registrar’s office, largely, she claims, because she could “type and show up.”  It was then that she realized computers were not devices of the underworld, but could be quite useful, and even (gasp!) fun.  Social networking, through music listservs and community bulletin boards, truly pulled Anne into the thrall of computers.  Finally, in 1993, Anne purchased a 213mb hard drive beaut of a machine.

It was at this point that Anne considered library school as a route through which she could play with computers without necessarily having to mess with 1s and 0s.  Throughout her time in SLIS, she worked several jobs in the library, including branch coordinator of the SLIS library and support staff in the Subject and Area Librarians office.  In the latter position, like a true hero, she successfully navigated the office through Y2K.

Upon completing her Master’s in Library Science, she moved fully into the tech world when, she claims, she was put in charge of the intranet while out sick one day.  That’ll teach her to be sick.  The libraries created a position in Library Information Technology as Documentation and Instructional Writing Coordinator, where she wrote content for the website and knowledge base.  With the formation of DUX, Anne finally fulfilled her destiny as Website Editor.  This brings us to present day.  What does our epic hero see on the horizon?  Anne believes that content strategy is the future of user experience in libraries.  You can read her blog post on the subject, as I’m not even going to attempt to tackle an explanation.

Outside of saving users from their website woes, Anne is a published poet (yes, you can check out her chapbook of poems from the Wells Library!), music lover, devoted cat mom, and social networking advocate.  Continue to follow her adventures on Twitter at annehaines.  When asked if she had any final thoughts for her devoted readers, Anne replied, “I really like my job, maybe not every single moment, but I think I have the best job in the library.”