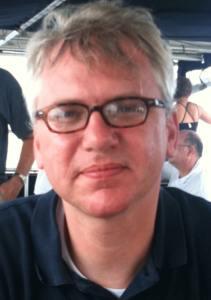 Garett Montanez is currently the Lead Web Architect for the IUB libraries’ website in the Digital User Experience department, a position he describes as “mapping out what’s possible.”  While he does his fair share of programming and playing about with code, the majority of his time is spent on planning and analysis, determining what is working for users and where to take that technology in the future.  He puts much of his energy into finding new technologies to fulfill the dreams of the residents of library land.  Reading about and testing these technologies fill much of his days.  As Lead Web Architect, he is also Lead Web Technology Trouble-shooter, and spends a good amount of time putting out fires that crop up around the website.  While there are a million possibilities for the future of technologies in libraries, he says, it is his task to figure out what’s the best and most feasible route to improve user experience.  While navigating this vast landscape can be overwhelming, Garret expresses that the people he works with make the whole enterprise worthwhile.

He is currently working on migrating some of the libraries’ technologies over to more appropriate platforms, like Drupal for the website’s content management system and SharePoint for the libraries’ intranet.  As far as the future of the libraries goes, he sees a lot of possibilities for linked data in the future.  Linked data – which Garett explained eloquently as I stared blankly – is, in a small, general, and possibly grossly inaccurate nutshell, a method of structuring data such that both humans and computers can find relevant and related information easily, making the world wide web even webbier (and wider and worldlier).   For more information on linked data, check out these reports on linked data in libraries from the W3C Incubator Group and the Council of Library and Information Resources.

Garett did not begin his career in libraries with wide-eyed dreams of linked data.  In fact, he describes his path as a balancing act between traditional academic librarianship and the more technical side of librarianship.   He began his journey at IU, receiving his dual MLS/MIS degree from SLIS.  Out in the wide world he started as a computer tech, networking websites at a public library in Fort Wayne.  From there he continued to shift from tech guru to academic librarian and back again.  Garett discovered that having a background in both the technical side and the public service side of librarianship has served him well.  He is knowledgeable about the needs of public service librarians and can deliver results quickly due to his experience on both sides of the tech line.  Knowing the needs and the possibilities makes it easier to fulfill the goals of the libraries and librarians and work toward the best possible future.

Outside of DUX, Garett is the proud new father of baby James.  Although he says that having a baby has pretty drastically changed his lifestyle (he and his wife can no longer jet off to Indianapolis or Chicago for the occasional concert…for the next 18 years), he doesn’t seem too put off by this.  Ultimately, he says, he finds fatherhood to be “pretty cool.”