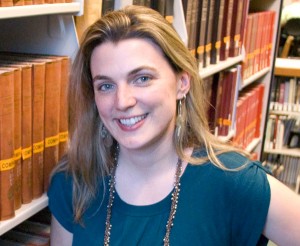 Courtney “Fearless Leader” Greene is the Head of the Digital User Experience department.  When asked to describe her position, she replied, “everything is my job and nothing is my job.”  That’s real helpful, Courtney.  Oh wait, there’s more.  She says that her primary charge as department captain is to support the goals of  the department as a whole, as well as enabling the success of the individuals that make up the crew (I’m going with a pirate theme here, see?).  She skillfully tacks back and forth between utilizing the strengths of each department member while ensuring that the user experience objectives of the library are met.

Courtney, an Indiana native and IU graduate, received her degree from SLIS in 2000.  She began her career in librarianship in the public services cove of the library sea.  After her first job as a reference librarian at UIC in Chicago, Courtney moved on to DePaul as an instruction librarian.  Although she didn’t know it at the time, the northwesterly winds were consistently pushing her toward the open seas of user experience.  While at DePaul she became involved in the library’s web committee and proceeded to chair the committee through a major redesign of the library’s website.  It was here that she found her niche between coders and people who need the code that coders code.  She bridged the gap between public services and technical services further by pursuing her Master’s in Human Computer Interaction at DePaul.  Courtney now looks back at the last decade of her career and sees a clearly mapped trajectory leading her ever-closer to her current areas of interest.  X marks the spot at user experience.

Courtney is currently involved in several projects that will be sure to make the IU Libraries’ website more seaworthy.  Shifting the IUCAT interface to Blacklight and implementing EBSCO Discovery Service – in the form of the new and improved OneSearch@IU – are at the top of her priority list.   She is also involved in the migration of the website’s content management system to Drupal and is keen to see the current CM walk the plank.  The future of user experience in libraries is currently unclear to Courtney, not because she lacks vision, but because libraries (and especially library technologies) are in a constant state of flux.  She describes the future as a “series of transformations” leading to better, more seamless, user interactions with library resources and services.  “We’ll never be done improving,” she says.

Courtney states that the most rewarding part of leading DUX through such maelstroms of change is working with the hardy souls that crew the department.   They are a “great staff, full of ideas and energy.”  They make it possible to be professional and playful at the same time.  Courtney firmly believes that there are always opportunities for fun and creativity on the job.  In this spirit, rubber ducks pop up everywhere around DUX.  Apparently, Courtney knows a sweet site for all things rubber ducky.  If anyone finds themselves in need of a rubber duck, she’s got the hook up.

Outside of DUX, Courtney is a bona fide foodie.  In addition to gardening and cooking, she writes cookbook reviews for Library Journal.  Crafting is another joy of hers.  It complements the abstractness of a job working primarily with technology, she says. At heart she is a tinkerer.  She finds something very satisfying about being presented with a problem and then making it work.  In DUX, “If it feels like magic [for the user] that’s what we aim for.”

To say “Ahoy!” (or find out more about that rubber ducky thing), follow Courtney’s adventures on Twitter at xocg. 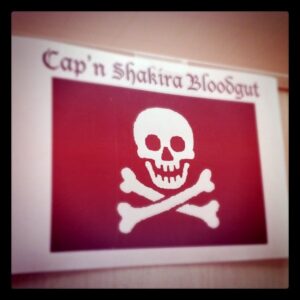