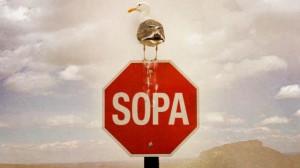 While it may seem the threat of SOPA and its ugly cousin PIPA are over, there is still a long road ahead.  While the media blitz that occurred around the end of January(which many major web companies such as Google, Reddit and Firefox were a part of) may have crippled the initiative, the push to have tighter control over digital copyrights is not over.

So what does this mean for libraries?  How would these bills, or ones like it, affect what libraries can offer their patrons?

Several librarians and library related organizations have written about the issue, generally in protest:

From a practical stand-point, SOPA could be, and probably would be, bad for libraries.  This is particularly true if libraries are dependent upon open educational resources.  These resources risk being shut down if they are thought to contain any material protected by copyright without the explicit consent of the author.

SOPA also poses a more theoretical, or even ideological risk to libraries.  As stated in the ALA code of ethics (http://www.ala.org/advocacy/proethics/codeofethics/codeethics) article II, librarians should “resist all efforts to censor library resources.”

The broad reach or SOPA and PIPA threaten libraries on both a practical and ethical level.  These are important factors to consider when determining what role libraries and librarians should take regarding this issue.