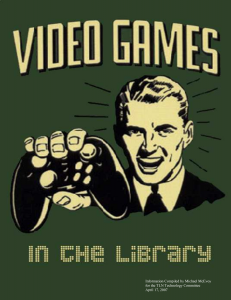 Games have been a part of libraries for years now.  Whether it is analog board games (chess, checkers) or modern video games such as Playstation or Wii, libraries have been using games to attract attention — and potential users.

During my stint as a Young Adult librarian at a small public library, setting up video games was always a way to draw a crowd.  Whether it was a Wii, Rockband, or DDR (Dance Dance Revolution) gaming days at the library were always sure to bring in the teens.

Blogs and websites such as gamesinlibraries.org and the Gaming Wiki for Libraries provide up-to-date details and instructions on how to integrate gaming at libraries.  Many libraries, particularly college campus libraries, circulate video games and even gaming consoles like they would any other materials.  Games have proven themselves as both a way to attract users as well as serve as meaningful items worth circulating in their own right.

But here’s the problem.

Up until this point, games have been used largely to “bait and switch.”  “Hey kids, come to the library, play some games, and now check out these books.”  “Did you know you can check out games at the library?  Well you can also check out books while you’re here!”  While there isn’t anything inherently wrong with this, there is a definite lack of integration.  Even when games are incorporated into circulation, they largely serve to attract users to other materials available.

With the explosion of mobile app use, of course mobile app gaming has come part and parcel along with it.  The question has been, how do libraries get involved in mobile apps.  I think there is a big opportunity for libraries to marry their friendship with gaming and their need to become more mobile.

And more importantly this could provide a medium to really bridge the gap between library resources and games.  There is definite potential for mobile apps that incorporate library resources in game form.  The most successful libraries will be those that can use gaming to have users actually use their other resources in integrated and meaningful ways.