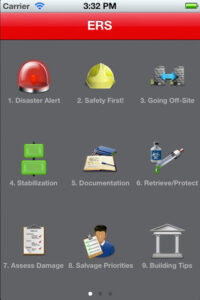 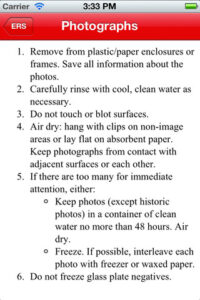 I ran across an interesting app recently: ERS: Emergency Response and Salvage. The iTunes description reads, “Based on Heritage Preservation’s Emergency Response & Salvage Wheel, a well-respected cultural heritage protection tool, the Emergency Response and Salvage app outlines critical stages of disaster response, such as stabilizing the environment and assessing damage.” This app might be useful for librarians and preservationists – particularly for librarians who are not preservation specialists but who occasionally have to tackle some immediate damage, and for those who receive inquiries from the public about how to preserve their personal books and documents (a relatively common question at many reference desks).

Disclaimer: Since I don’t have an iThing, I haven’t tried out this app myself – but it looks very cool, and it comes from a reputable organization, so it probably includes good information. According to a post on Heritage Preservation’s Facebook account, they plan to develop an Android version but “are not sure when.”

Price: Free. Available for iOS only (iPhone/iPod Touch/iPad), via iTunes.