Earlier this month Google gave the world a sneak peak of Project Glass, the newest creation to come out of the company’s top-secret Google X lab. Project Glass is an augmented reality system worn much like a pair of glasses that displays information layered on top of the user’s visual field. In short, it’s a smart phone for your face.
Project Glass and other similar technology opens up a world of possibilities for social networking, entertainment, education, and even tourism. The concept video released by Google depicts just a few ways that the augmented reality system could simplify our everyday interactions.  The individual in the video uses the specs to check the weather, navigate the streets of New York, book concert tickets, share pictures, and chat with his friends. Perhaps the most surprising thing about Project Glass is the sleek design. The system looks like a high-tech headband with a tiny unobtrusive display screen on one side. Although they might not be the peak of fashion, these are no bulky nerd glasses. 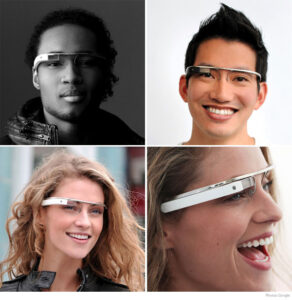 It’s exciting to think about the possibilities for augmented reality in libraries. Imagine an individual trying to locate a book in the stacks of Wells (assuming there are still books in this futuristic scenario). She could use voice commands to search the library catalog, chat with a librarian via Skype, follow an arrow that would lead her directly to the location of her book, and scan the barcode on the book to immediately retrieve reviews from library databases – all without even so much as lifting a smart phone or downloading an app.

Keeping all this futuristic awesomeness in mind, there are a host of ethical, social, and even psychological questions that arise with the development of augmented reality technology. Issues of privacy, commercialization, and information overload are but a few reasons to be hesitant about welcoming Project Glass with open arms.  However, as the inevitable extension of mobile computing, this technology is coming down the pipeline whether we’re ready for it or not.   There are many applications of augmented reality that are downright revolutionary, but it is best to proceed with caution into this brave new world.