There are many definitions of user experience.  A previous reDUX blog post sought to clarify the differences between user experience and usability, two terms that, while related, are not synonymous.  I like the definition of UX posited in that post and taken from the UX experts Nielsen-Norman Group: “[User experience includes] all aspects of the end-user’s interaction with the company, its services, and its products. The first requirement for an exemplary user experience is to meet the exact needs of the customer, without fuss or bother.”  This definition gets at the core of user experience: providing a positive experience at every point of service.

The other day, while working at the reference desk, I had the opportunity to assist an older gentleman, an Indiana resident using a guest access account, in tracking down and requesting some books.  This patron, who appeared to be in his late 70s, demonstrated beautifully the intersection of the old-school library patron and modern library technology.  The man was clearly a library user from way back, and he came to the desk excited to find some books of regional history, whose titles he had scrawled out in a fine hand on yellow legal pad paper.  I searched a title in the new IUCAT and found it available at the ALF.   “Let’s request it for you,” I said helpfully, and the man was overjoyed, amazed, really, that the IU Libraries had this rather obscure annotated bibliography among its vast collections.  “You have it?” he asked, incredulous but beaming.  “You have everything!”  “I know,” I replied, caught up in his wonderment, “We have almost eight million items in our collections!  It’s awesome!”

To many people, libraries are a magical place, overflowing founts of wisdom.  This older patron reminded me why I have wanted to be a librarian for so long, why I am in library school: I love libraries—they contain multitudes.  But libraries (both their physical and electronic manifestations) can also be overwhelming places.  I see the quiet looks of confusion on the faces of incoming freshmen, on the faces of those users who confess to me at the desk: “I’ve never been in here before.  I don’t really know what I’m doing.”  Libraries have the information and they have the users to disseminate the information to—and this is great.  However, the technology that is used to disseminate this information moves at what sometimes feels like lightning speed, and this can stymie some users.  Libraries have been around for centuries and centuries, for instance, while the conversion from card catalog to OPAC has taken place in just a few short decades.  The older gentleman I assisted wanted his books, and he hoped with the hope of all library lovers that we would have them and be able to find them for him.  Where he hit a roadblock was with the new technology, so easy for me who has grown up with it and assimilated its changes in real time, but not so easy for him, who was brought up with a totally different system. 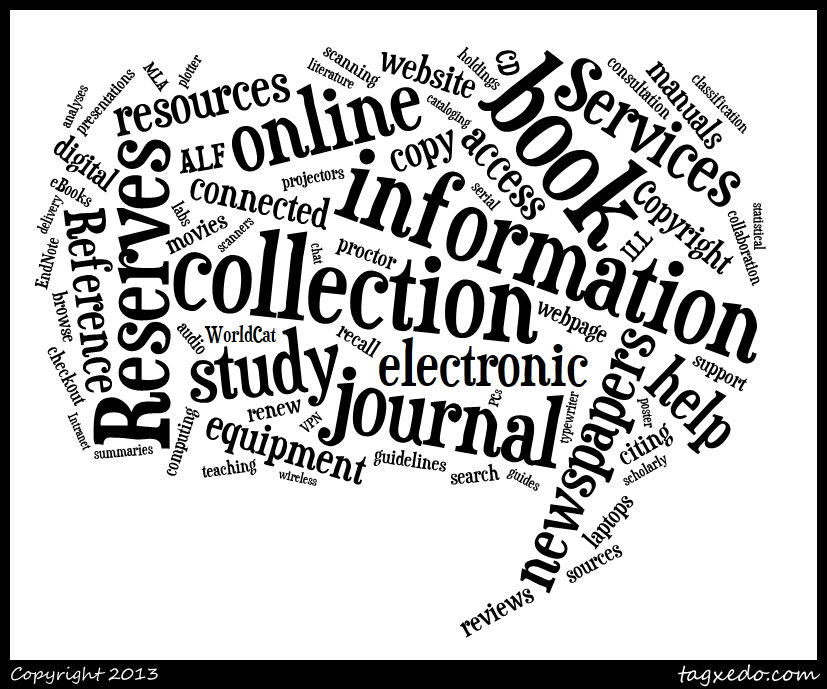 Here are some key terms derived from questions oft-posed by patrons at the reference desk.

I walked him through registering for a library login so he could use the computer workstations in Wells.  I helped him navigate to the catalog—and with the recent transition from IUCAT Classic to New IUCAT, there was even some discussion between me and the circulation staff about which version of the catalog would be easier for him to use, demonstrating, again, the ever-changing nature of library technology. I next helped the older gentleman find the bibliographic record for his book and request its delivery from the ALF.  Later, I helped him access an ebook edition of another title he was delightfully surprised we had access to.  He thanked me profusely while I helped him, and then again later when he came to the desk to say goodbye.  He said he now felt empowered to find and access his own items, and wouldn’t “torture” me with so many questions the next time he popped in.  “Haha,” I smiled.  “It’s no torture at all.  It’s my pleasure.”

While this story might seem like nothing more than a cozy anecdote, I think my interaction with this user has very real, if basic UX implications.  Users come to the library with a variety of backgrounds, skill sets, and needs, but what they all share is the desire for a positive user experience.  That experience might seem relatively simple, small, especially to the library professional, but it can make a world of difference to the user.  A positive experience is one that either will help to further foster a user’s love of libraries or will demystify the library and its many systems so that he or she comes back the next time feeling a little more intrepid.

By the way: You can learn all about Library Guest Accounts here and Requesting ALF Items here.