I recently had the opportunity to attend Confab, a conference devoted to learning about content strategy. Since this wasn’t a library conference, or even a higher ed conference, I knew I’d be outside my comfort zone a bit – and indeed I was. Among the 611 attendees there were a few librarians/library folks and a small contingent of higher ed people but the fellow attendees I spoke with came from all over the map, representing everything from government and non-profit agencies to companies like Whirlpool and Wal-Mart, as well as quite a few independent consultants and contractors. Compared to the demographic at a library conference, the crowd was somewhat younger and slightly (but only slightly) geekier, with a gender balance not too different from the library world – decidedly more women than men.

"Betty Crocker is our cake sponsor. That's not even a joke. Every conference should have a cake sponsor." #ConfabMN 😀 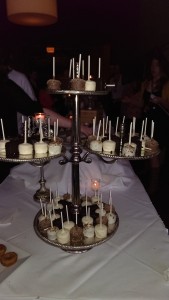 I am not kidding about the cake.

I may have been outside my comfort zone, but I was quickly made to feel right at home. Now in its third year, Confab has developed a reputation for being well-run and for great food, particularly cake – Betty Crocker is one of the conference sponsors! – and it exceeded my expectations on both counts. (Let’s just say that if someone talks about the “Confab Four” they are probably referring to the weight they gained, not a mop-topped quartet of Liverpudlian content strategists. Nobody will ever go hungry at Confab, that’s for SURE.) This is a conference organized by user experience professionals, and they have clearly given careful thought to the user experience of the conference itself – from the beautifully-designed program booklet to the reliable Wi-Fi bandwidth, from clear (and even witty) signage to helpful and friendly volunteers, the organizers obviously wanted us to be able to use our mental and emotional energy for learning and connecting rather than for dealing with confusion or frustration. 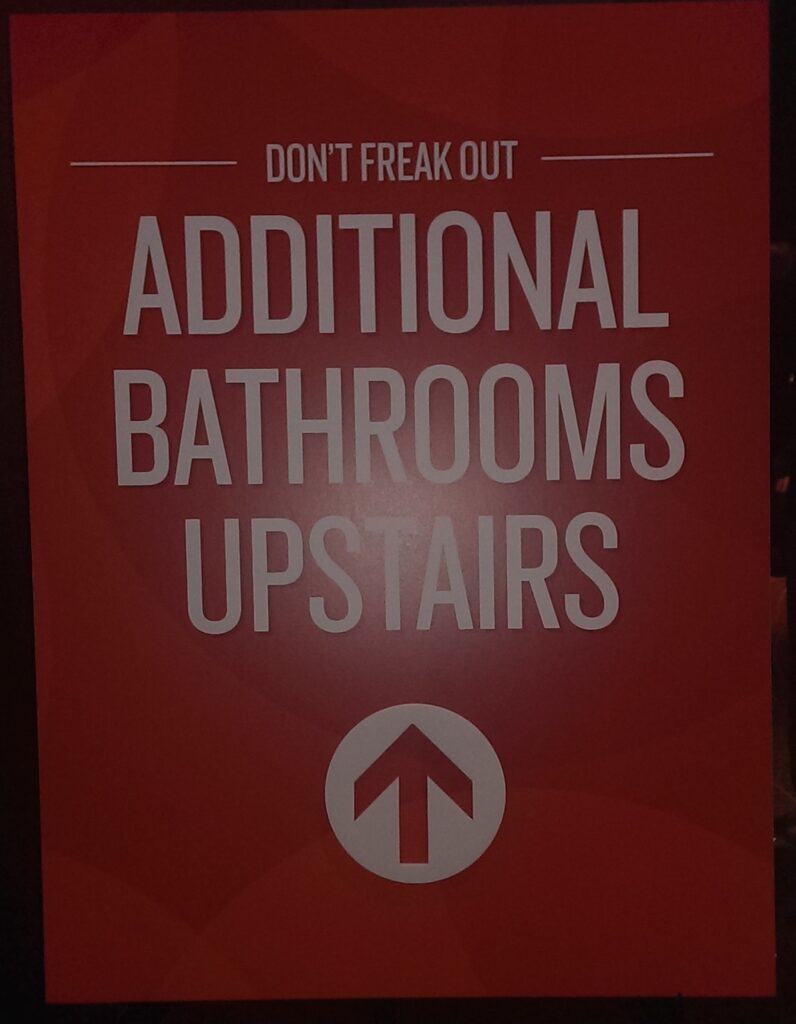 The Confab program included lots of interesting-sounding sessions, and at times I found it difficult to choose – but all the sessions I attended turned out to be quite good and gave me something to think about. Not only that, but over the two full days, not one presenter stood there and just read me their slides, and they were quality slides too – in two days I spotted only one typo on one slide. That’s pretty amazing.

While it wasn’t necessarily a new-agey, touchy-feely conference, neither was Confab a technical conference. Like the field of content strategy itself, its focus was on that slightly-nebulous intersection of communication and technology. As such, there were some assumptions made about attendees’ technical knowledge – for example that we understood the basics of web publishing and using a content management system, and were somewhat familiar with social media (the Twitter stream for Confab was quite active and provided a useful backchannel throughout the conference) and current online culture. It was also assumed, correctly, that most attendees were word-nerds and that wordplay would be an effective way to get one’s point across. Probably the best (worst) (no, best) example of this wordplay was when closing keynoter Paul Ford used the example of an apple pie contest, with complex and extensive rules for what constitutes “apple pie” (can it include bacon?) and the specific roles of everyone and everything involved (apple farmers, bakers, judges, ice cream), as a metaphor for web content governance – and foisted upon us the term “pierarchy.” Yeah. It was that kind of a thing. 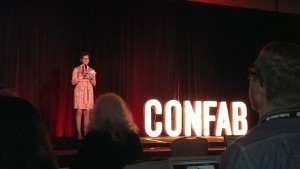 Kristina Halvorson drops some content strategy learning on us. Yes, that’s a giant CONFAB of light on the stage.

Early the first morning, Confab mastermind Kristina Halvorson‘s opening keynote set the tone by running down the top ten things content strategists always hear from clients; the murmurs of recognition throughout the room demonstrated that even though we may work in very different organizations with very different projects and clients, we all face many of the same issues – for example, “we have too much content.” This is equally terrifying (I was hoping maybe somebody somewhere had the answers to everything? Sigh) and reassuring.

Jared Spool’s Day 2 keynote, “Experiencing Delightful Content,” was – if I had to choose – the highlight of the conference for me. (I say this with some reluctance, as there were multiple highlights and really the conference was more than the sum of its parts – it’s almost impossible to single out any one presentation without the context it gained from the other talks and the zeitgeist of the conference as a whole.) Spool talked about what it takes to make your web content go beyond “usable” to providing an experience of delight for your users. You can make your content “not suck,” he pointed out, but simply removing frustrations isn’t enough.

"To make something not suck, just remove frustration," per @jmspool. "But to make it delightful? That's something you add in." #confabmn

Making content delightful requires dancing at the convergence of a number of different aspects of user experience, as seen in this slide: 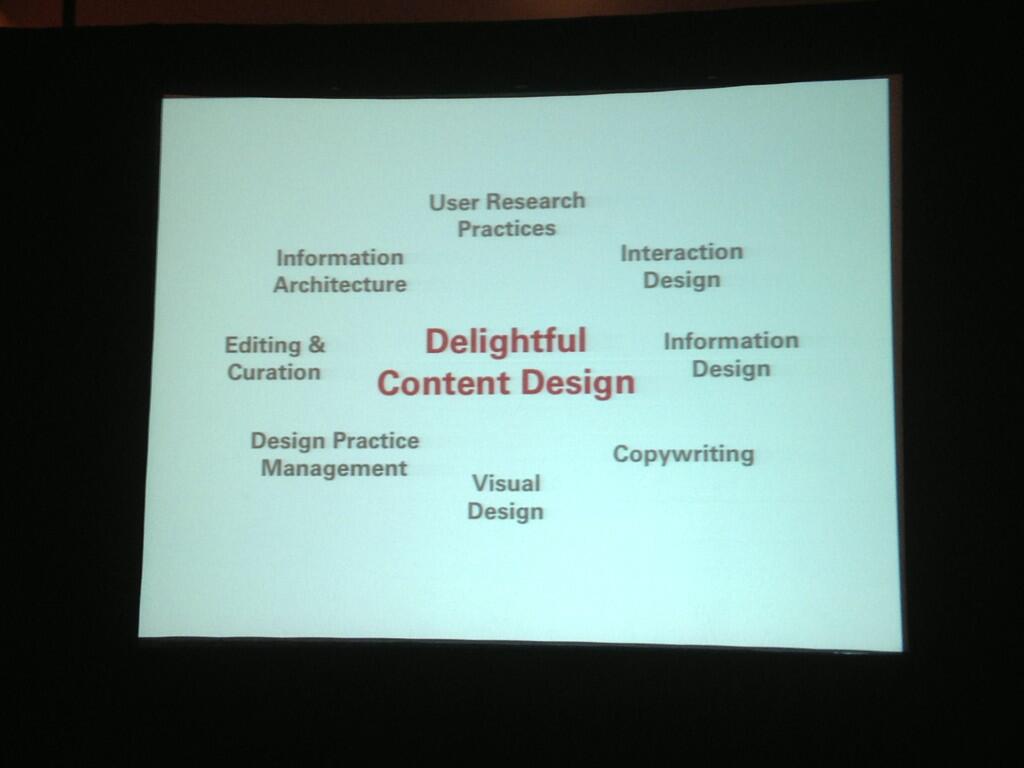 Many of the sessions I attended – including Corey Vilhauer’s “Empathy: Content Strategy’s Hidden Deliverable,” Amanda Costello’s “I Don’t Have Your Ph.D.: Creating Content with Experts and Specialists,” and Jonathan Kahn’s “Digital Governance Fails Because We’re Afraid of Cultural Change” – focused strongly on the “soft skills” of communication with users and content creators, project management, and change management. As Vilhauer noted, “content strategy is made of people!” Since a significant part of my job involves working with content creators throughout the Libraries, these sessions were tremendously helpful to me. Working with people is a huge part of the “strategy” in content strategy! In many ways these themes were what set the tone for the entire conference, as we were encouraged to listen, to become change agents, and to ask “why” at every turn. Katie Del Angel sums it up nicely in her blog post, “The Touchy-Feely Side of Content Strategy: #ConfabFeelings.”

Every session I attended, in fact, was helpful to me – but I was grateful for the Twitter backchannel, which allowed me to peek into some of the sessions I did not attend. Sometimes I got great nuggets though I probably missed out on some of the context within which they were presented, like this one re: the importance of structured content:

Watch this blog for future posts with more specifics about some of the sessions I attended, as I have time to write them up. (And feel free to fire up the official Confab Minneapolis 2013 playlist on Rdio as you read. It’s pretty cool.)

You can find slides from many of the Confab presentations on Slideshare.