Recently, there was an interesting article on TheDigitalShift.com about South Carolina State Library’s launch of a Social Media Library and archive. Basically, the project will archive all tweets, Facebook posts, and YouTube content generated by official accounts of South Carolina’s state agencies allowing public access through an online portal, scsocialmedialibrary.org. Take a look at it here! 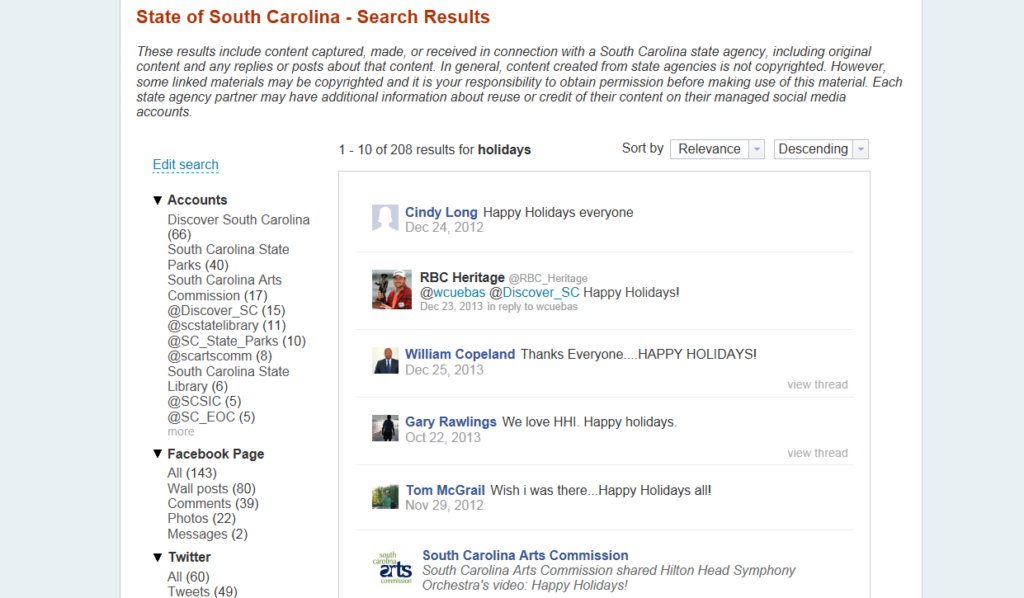 You can quick search or perform an advanced search of different topics, and it provides all media sources including tweets, direct messages, wall posts, comments, messages, and photos.

This isn’t the first attempt at archiving social media. Notably, in 2010, the Library of Congress announced plans for the Twitter Archive, which would house every public tweet since 2006. Today, they have successfully acquired and preserved all tweets up to 2010—approximately 170 billion of them and growing! Yet, South Carolina’s Social Media Library, although similar, stands apart from the Library of Congress project in its public accessibility as well as its ability to record and show conversations taking place. Amanda Stone, SCSL Innovation and Digital Librarian, explained that social media has become a source of two-way communication between organization and citizen. She goes on to say that “Citizens [were asking state agencies] questions on Facebook, or they’ll reference events they went to on their Twitter accounts back to the agency. And that’s something that was being lost.”

So, whether Library of Congress Twitter Archive will eventually become open to the public remains a topic of much curiosity (400+ researchers have inquired with no such luck receiving access; therefore, the public, too, will have to wait—sigh) although the possibilities are certainly exciting.

But, what makes South Carolina’s project so important is what it is recognizing from social media and how it’s responding appropriately to its citizens.  Providing access to those communications and the two-way dialogue is an important evolution in archiving social media. And they aren’t alone in this endeavor to provide and simplify public access to social media archives. The State Archives of North Carolina launched a similar idea just a year ago.

And while probably not without future bumps and problems, I think this trend is an interesting one to follow and shows that social media is an integral part of our daily routine, serving as medium for our thoughts as well as connecting us with friends, coworkers, businesses, and organizations. The world gets smaller as our opportunity to connect grows. And of course, I enjoy stalking  following a few of my favorite bands and reality stars, keeping up with their daily life (go ahead, admit it too). But on a more serious note (although my stalking is serious), social media immediately informs the public of political issues as well issues of state and national security.

Also important to recognize is that not all social media platforms will exist forever and likewise, organizations might delete accounts or merge with another, but the content of these messages and posts remain important for reflection in the weeks, months, and years to come.