This year’s Open Access Week events at Indiana University-Bloomington were a resounding success. Due in large part to new cross-campus partnerships, the Scholarly Communication department was able to bring a series of six events to students and faculty from October 22-26. 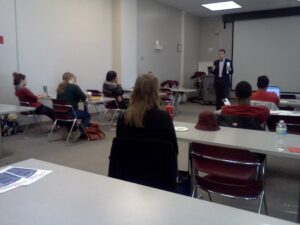 Librarians Jen Laherty and Nazareth Pantaloni kicked off the week on Monday with their talk “Making Your Work Open Access,” which focused on IU-specific resources for those new to OA publishing. Dr. Urs Schoepflin of Max Planck Gesellschaft fuer Wissenschaftsgeschichte (Berlin) gave a talk on Monday afternoon titled “Challenges for the Humanities: Scholarly Work and Publishing in the Digital Age.” The event, sponsored by Sawyer Seminar (Mellon Foundation), Catapult Center for Digital Humanities, and HPSC brought together faculty and librarians from across the campus for a great discussion on experiences in supporting Open Access digital humanities projects.

On Tuesday, Business/SPEA and Law School graduate students attended a lecture (co-sponsored by GPSO) led by Christina Sheley, Cindy Dabney, and Stacy Konkiel on how to use the popular subject repository, Social Science Research Network. 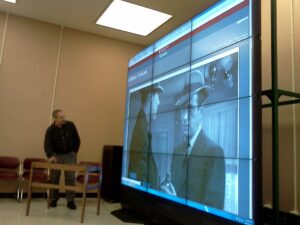 Science was also on the mind of those who attended Wednesday’s DLP brown bag, “Open Data Visualizations for the Sciences and Humanities,” featuring researchers from across the campus that use visualizations based on open data to power their work. The event, which was the first brown bag held at the new IQ Wall in the Wells Library East Tower, was the week’s best attended.

IU Bloomington and IUPUI. The event, co-organized by IUB SLIS students Laura Manifold and Margaret Janz and librarian Kristi Palmer at IUPUI, and co-sponsored by the GPSO, was the most popular graduate student event of the week. Asked why she chose to participate in Open Access Week, Manifold explained, “I really believe Open Access is an integral part of the library’s future.  As an MLIS graduate student, it’s important to me to get my peers involved in what will be the norm for scholarship and research.” Janz agreed, adding: “Open Access is a great -and necessary- shift in scholarly communication, not just for graduate students, but for all scholars and researchers. It’s goes beyond issues of library budgets; open sharing of information is essential for advancing research on a global scale.”

The IU Libraries and the new Office of Scholarly Publishing rounded out the week by releasing a statement explaining their support for Open Access. The statement, available here on the Scholarly Communication Department’s blog, sums up the reasons why facilitating Open Access publishing is a priority for the Libraries.

The Scholarly Communication Department would like to thank the GPSO for their co-sponsorship of our events. We would also like to thank our workshop leaders, participants, and SLIS students Laura Manifold and Margaret Janz.