One of the lesser known collections in Media Services at the Wells Library is our great selection of video games.  From the original Xbox, to Xbox 360, to Nintendo Gamecube and Wii, to all kinds of Playstation systems, our collection has something to offer for casual and hardcore gamers alike.

In my case, growing up on the Super Nintendo shaped my taste of video games that I enjoy today.  Here’s a few of my classic favorites, and their modern-day equivalents in our collection. 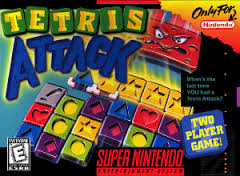 This fast-paced puzzle game is similar to its original namesake Tetris in that the object is to clear as many lines as possible.  However, unlike the original, this game allows you to switch single blocks back and forth in order to line up with blocks of the same color.  This game has unlimited replay value, with the single-player Puzzle Mode and Vs. Mode, along with Multiplayer Mode which allows players of all skill levels to jump in.  Whether you’re a beginner playing on Easy Mode or an expert who needed to unlock Super Hard Mode for an adequate challenge, Tetris Attack requires lightning-fast thinking and decision making and is both challenging and fun.

If you like this and other problem-solving games, Portal 2 for the PS3 from Media Services is a must-play for you.  Like Tetris Attack, the Portal series requires critical thinking skills to go far, but in a more modern twist, Portal also adds the element of the Portal gun, creating, well, portals to jump through in order to land on your next platform to move on in the game.  When you add this element of precision, and not to mention the wise-cracking GLaDOS, you have yourself a game that will bring hours and hours of fun…and frustration, but in a good way. 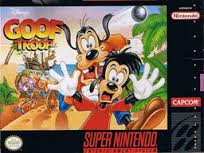 Another lesser-known SNES title that took up some would say too much of my childhood was Goof Troop.  Based on Disney characters Goofy and his son Max, this game follows the tandem on another wacky adventure which involves, as you may be able to guess from the game’s cover, pirates!  What this game lacks in number of levels, it more than makes up for in charm, and if you’re even remotely a fan of Goofy and the gang, you would love this game.

If you like to blend your love of all things Disney with your love of video games like I do, you would love Kingdom Hearts II for the PS2 system in our collection.  This game is a unique crossover between the Disney universe and the vastly popular Final Fantasy universe.  Like Goof Troop, Kingdom Hearts is an adventure RPG series and in this installment Sora, the series’ main protagonist, must go on a quest with Donald Duck and, you guessed it, Goofy to find his missing friends.  Though Kingdom Hearts II is said to have a somewhat darker tone than its predecessors, the nostalgia of the Disney elements mixed with the fantasy elements brought into play will make you wish you were on the journey with them. 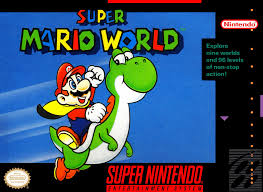 And of course, what would any 90’s childhood be without the inclusion of Super Mario World for the SNES.  This installment of the Mario lore has the essential elements of the side-scrolling mission to beat the baddies and save Princess Peach, which is pulled off as creatively and masterfully as ever, but with fresher elements added in as well.  For one thing, this is the game that introduces Mario’s dino-esque friend Yoshi to the world, and I think we can all agree that the world is better for it.  Not only does Yoshi make this game a classic, but the addition of the Leaf powerup that enables Mario to fly, and the seemingly countless amounts of hidden passageways and secrets will enthrall you.  Heck, I’ve been playing this game off and on for upwards of 14 years and still have yet to unlock all the game’s secrets.

If you are a big fan of saving the Princess (even though let’s face it, she’s probably in another castle), you can continue the quest with one of my modern favorites, New Super Mario Bros. Wii, from Media Services.  Even though this game also follows the plot of Mario and friends attempting to save Princess Peach, this version brings all new tools to the table.  By utilizing the motion-sensitivity of the Wiimote, you can helicopter up into the air, shoot the classic fireballs, and help out your cohorts all with the shake of the wrist. This leads me to the other aspect of this game that sets New Super Mario Bros. apart: the introduction of multiplayer action.  No more waiting until your brother finally loses a life to get handed the controller (well that was my experience anyway)!  For the first time in Mario Bros. history, this game allows you to play up to 4 players at a time on the same level.  The real fun in this is to decide whether to use these extra players as a team exercise in saving the Princess, or as a race to see who can get to the flag fastest, and in the process, how many of your friends can you knock out?  And, like Super Mario World, there are also countless secrets and side level to play as well.  Whether you’re a social gamer or prefer to defeat Bowser in solitude, this game is a wild ride from beginning to end.

If any of these games pique your interest, or whether your into sports games, first-person shooters, or fighting games, we’ve got games for all tastes here at Media Services!  Hope to see some fellow gamers stop by soon.