In order to explain how I do my work, I thought some pictures would be helpful.  Then I decided to go a step further, so I created a time-lapse video of a shipment being processed.

The fleet of book trucks has arrived! They are brought to us from  Wells Library, just in time for the arriving bindery shipment.

At this point, the big table is empty and the outgoing shipment has been processed and is ready to be picked up.

As the Bindery and Preservation Review Coordinator, I oversee the preparation of materials for commercial binding.  We send shipments to the HF Group in North Manchester, Indiana every fourth Tuesday.  The outgoing shipment is picked up at the same time the previous month’s finished shipment is returned to us. 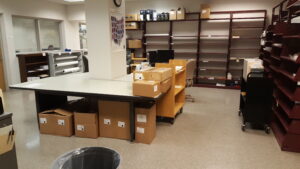 Now the return shipment is being brought in by the HF Group truck driver–ordinarily about 40 boxes. 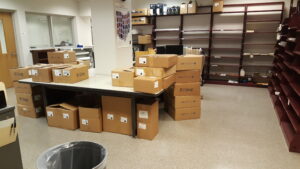 The return shipment must be processed quickly–within a week–so when the shipment comes, my students and I are all working on it.  The work pace is quite different than the rest of the month, as materials to be bound are picked up from the various campus locations, and then brought to Wells Library, and finally here in the daily deliveries. 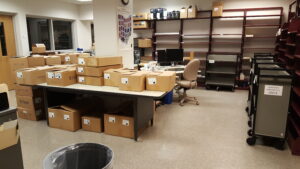 Now that all the boxes have been brought in, everything is in place. This bindery shipment is ready to be unpacked, checked, and sorted. 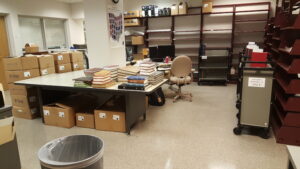 Here we have begun unpacking.

For our assembly-line, we put all the boxes on one side of the table.  The first person opens the boxes and places the items on the table oriented in the same direction.  The second person opens the volume and moves the bindery slip so it is readable when the book is closed.  Then, they sort the items based on where they will go next.  The third person has stacks of duplicate binding slips and matches them up to make sure every item has come back.  Finally, the volumes are sorted onto trucks to facilitate the next steps, which take place in Technical Services in the main library.

The time-lapse video was fairly easy to make.  I set the camera to take a photograph every 5 seconds.  Almost 2 hours later, we had 1,137 photos.  I took out about 100 photos and put the rest into an image sequence at 15 frames per second.  After exporting the video, I posted it to my (newly created) YouTube channel. 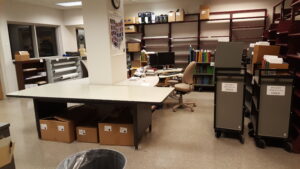 The table is once again clear of boxes and books.

The day we process the returned bindery shipment feels exactly how it looks in the video.  After everything is on the appropriate trucks, we deal with any extraneous problems that need to be handled before the items go back to Technical Services in Wells Library. 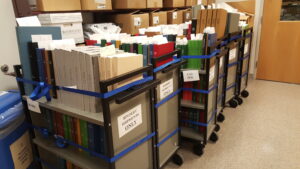 The items get secured with a strap around each shelf.

The trucks are now ready for transport.  After they leave, the work space seems much larger.  It also appears like we don’t have any work to do, but that’s not true.  In 3 weeks, the shipment that was picked up will be returned to us, and the whole process starts again.