WARNING: ADULT SWIM MAY CONTAIN MATERIAL THAT PARENTS MIGHT NOT FIND SUITABLE FOR VIEWERS UNDER THE AGE OF SEVENTEEN.

I will not use this blog as a way to prove I have psychic powers. In fact, I don’t believe that such a thing is really possible of myself or any person I’ve met to date. This is chiefly because I imagine if people could read my mind they’d risk all the alarmed exits as a means of escape. No, I am not psychic. But I bet you’re wondering why anyone would waste time writing a blog post about Adult Swim cartoons. Arguable as this point may be, I would like to counter it at least initially with a thought: that wasted time is probably both the chief inspiration for and product of Adult Swim’s programming since it grew out of the forehead of Toonami in 2001. And it grew indeed into that chiefly imported, teen focused, “late night” network’s wiser, more rueful daughter. In this analogy Chronos is Cartoon Network and the Titans Saturday Morning cartoons and Adult Swim the feverishly multiplying, capacious Gods of Olympus who scatter spangled ruin on unsuspecting humans and constantly transform into and out of the forces of nature. 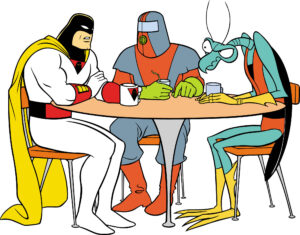 Let’s begin with Exhibit A: not the beginning, but not long after. A show that is the child of Space Ghost Coast to Coast. Which show itself we might find is best “explained” (if such a thing is even possible) in a kind of sporadic and non sequitur but generally reversed chronology.

Anyway it’s late and you’ve found yourself alone in front of the TV flipping and dipping (chips that is, maybe in salsa maybe in cheese depending on the kind of week it’s been) when you find yourself face to face with a three anthropomorphic aliens living in a beat up South New Jersey house with a milkshake shaped front door. You don’t have time to ask questions; the show leaves no room for commercial breaks—it just happens. 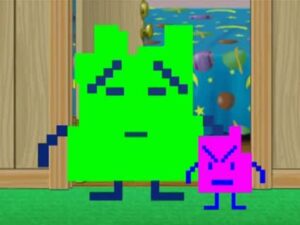 Maybe in this episode two diabolical 8-bit martian moon men will come crashing out of the sky to manipulate a wad of meat (who is, by the way, a main character) into stealing points in skeet ball for tickets, or maybe it’s the one where candy loving talking spider tricks Carl Brutananadilewski (the hairy wife beater and thong flip-flops clad neighbor) and Meatwad into wandering into the diaper clad spider’s old factory hideout so he can eat them by way of a bad (if catchy to the point of addiction and brainwashing) rap song.

And yes I mean that in terms of psychoanalytic king of the uncanny, Freud. You know what a cartoon is supposed to look like, what it’s supposed to do and this isn’t it. A Regular Show is based on a formula, it runs in a straight line even if taking fantastic detours into the surreal. Listening to its creators talk you see them try to explain this trajectory with your typical plot diagram type doodad. Trying to make ATHF follow this logic ends in a disintegration, the show is at its core a kind of formal refusal. Imagine an explicative painted in large letters across your retina—it burns the viewer seeking stable plot development. ATHF is only really a show theoretically. It gets frustrated with itself and changes name over and over. It’s Aqua Teen Hunger Force for seven seasons before becoming Aqua Unit Patrol Squad 1, Aqua Something You Know Whatever, Aqua TV Show Show, and Aqua Teen Hunger Force Forever for its eighth through eleventh seasons respectively. It is the show that takes Adult Swim out of obscurity (which is not to say it’s not still obscure) and establishes the space of some six of seven late night hours as some of TV’s most experimental.

There’s a point in here somewhere. 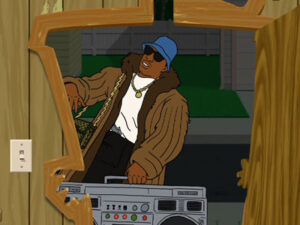 Schoolly D pays a visit to the Aqua Teens

Maybe it’s that ATHF is important for helping to establish the space that would give us Robot Chicken, and Sealab 2021, and Home Movies (which was the first true series run by the network.) Or maybe it’s that along with these and many other cartoons and shows Adult Swim helped to cultivate a space for Black comedy and Black art on network television. This is meant with double definition: black, meaning dark, absurd, with a tinge of morbidity, but also Black, as in us black folk. And so shows like Black Jesus, Black Dynamite, The Eric Andre Show, Loiter Squad, and The Boondocks become daughters of the network as well. This makes room for skits about the Tea Party affiliates as KKK members and professional black female tennis players bugging out on court to sit beside Family Guy reruns and American Dad!’s conservative body politic. Maybe because of (but more likely just in relation to) Aqua Teen Hunger Force’s great success (a show narrated and with music composed by rapper Schoolly D), Adult Swim becomes the kind of space John Milton (of Paradise Lost fame) might find extremely stimulating, a space where all discourses come to meet and mingle into the melting pot of farce until the viewer (or reader, keeping with Milton’s polemic opposing licensing and censorship Areopagitica) is forced to reckon all the differing realities into some solid and well informed opinion (here’s also looking at you Rick and Morty) or choose to reject all politics and social justice as a fantastic unreality of competing ideologies or choose not to choose, simply rolling another duBois and passing it to the other glazed, carbuncular young people poised and silently attentive in the half circle of couches in front of the TV. 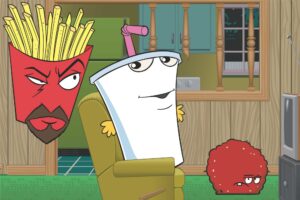 Either way: Aqua Teen Hunger Force and the network that grew up around it has become a powerhouse of experimental discourse and comedy driven radical activism. If you want to watch it you’ll find the first seven seasons here at Media Services.