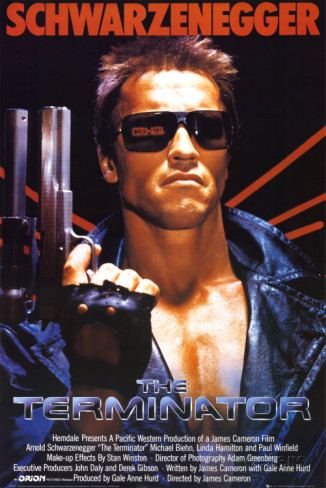 Over the past 32 years, the world has received five different Terminator films, vastly ranging in quality. The first film, known simply as The Terminator was released in 1984, written and directed by the legendary James Cameron and is hailed today as one of the greatest science fiction films anybody has every seen. It had thrills, romance, action, story, and actually make the audience think rather than serving all plot points to them on a platter. The Terminator was a genius piece of cinema and stands as one of the greatest films, period. 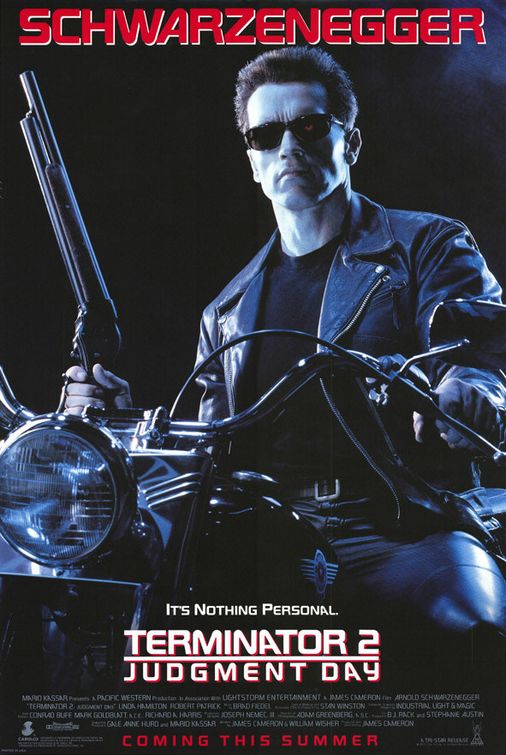 Seven years later, the second film came out. Titled Terminator 2: Judgment Day, this project marked the return for writer/director James Cameron in one of the best received and successful sequels of all time. As the highest grossing movie of 1991 (and my favorite movie of all time), T2 followed in the spiritual footsteps of The Godfather Part II or The Empire Strikes Back in showing how to be a great sequel: deepen the characters, expand the story, and improve on all aspects of the original and NOT just rehash what made the original good (ahem, all horror sequels ever). Terminator 2 isn’t just a run-and-gun, loud-and-dumb, smoking-barrel and empty-shell of a movie at all; it’s smart, romantic, heartfelt, profound, and inspiring in just about every way. That’s how you make a good sequel, or a good movie in general. 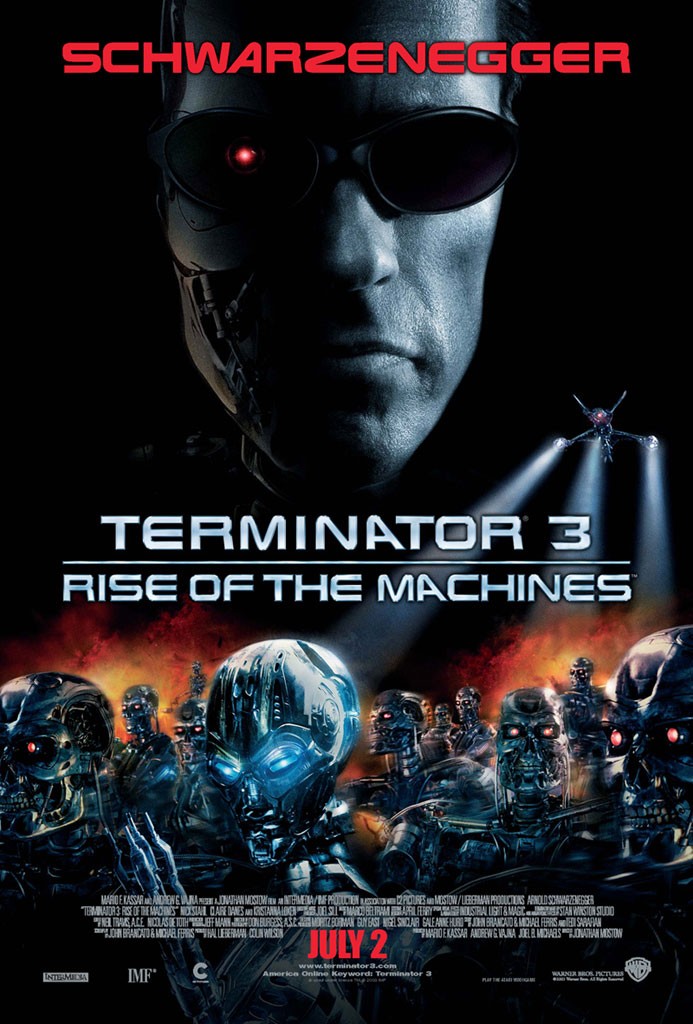 In 2003, Terminator 3: Rise of the Machines happened- I mean, was “released.” Honestly, T3 is one of my least favorite movies of all time right next to Ghost Rider: Spirit of Vengeance and Alien: Resurrection and is the textbook example of how NOT to make a great sequel. Lead by an annoying cast, penned by lazy writers, and directed with such bland taste, Terminator 3 would be a pointless movie even if it was a good one- which it was far from. All timeline contradictions with the other films aside, this movie can’t even stand on it’s own as a smart movie because of it’s own plot holes. This film tried to up the ante of villainy by combining the two villains from the first two movies into one, so instead of a terminator with just a metal endoskeleton OR an entirely shape-shifting body, this one had shape shifting metal over a metal endoskeleton…which was actually an embarrassing downgrade all-in-all, topped off with a supermodel body, for the appeal, I guess. Terminator 3 is a mess of a film, but somehow, the franchise kept moving. 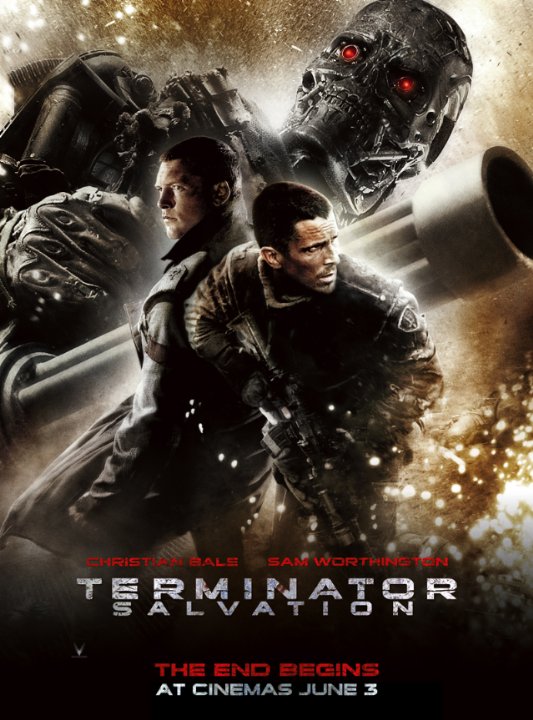 In 2009, the franchise made yet another unnecessary return with Terminator: Salvation, which isn’t a “bad” movie- but it doesn’t feel like a Terminator movie at any point in the film which makes it bad for the franchise. And the plot-twist in the middle of the movie really just didn’t make sense as far as the plot of the saga goes; nothing in the movie adds anything to the series. This one can be skipped. 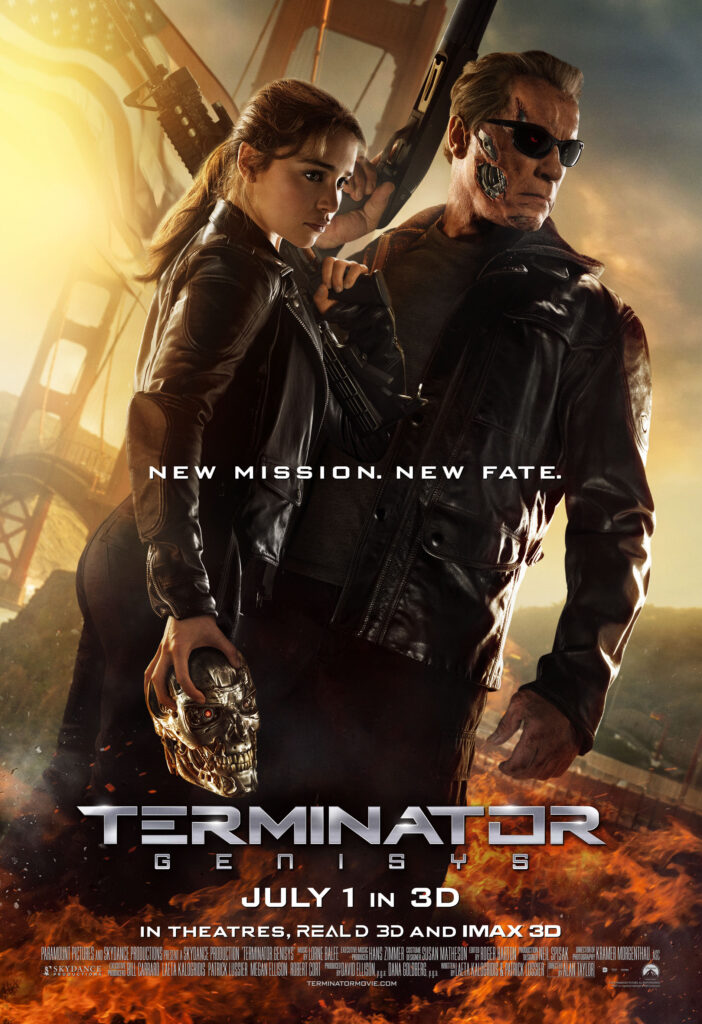 And then, the return of the series to its roots: Terminator Genisys. For some background information: in order to make The Terminator back in the ‘84, James Cameron had to sell the rights to the movie and all of it’s characters for just $1 to a producer who allowed Cameron to make his pet project. After T2, the rights to the franchise bounced from studio to studio, which explains the varying cast, tone and plot holes that the third and fourth films had. However, Paramount Pictures bought the rights to the franchise and decided to make a trilogy, before the rights return back to James Cameron in 2019. James Cameron has devoted himself to his Avatar series, but the amount of time he needs to allow for the special effects he requires to advance is enough to make another Terminator film if he desired after getting the rights back. So, back to Terminator Genisys; this film was the beginning of Paramount’s new Terminator trilogy- which they decided to make in a hurry before losing the rights to the franchise. Paramount’s film completely ignored Terminator 3: Rise of the Machines, and Terminator Salvation, which made fans (including myself) extremely happy; the fact that this film would respect the roots of the franchise. Before release, James Cameron got to see the movie and told the press that fans would “love this movie!” I thought the film highly respected the originals and was a very fun movie in itself, but critics and audiences didn’t love it, and the film didn’t make as much money as was projected, so the other two films in the trilogy were cancelled. Now, the Terminator franchise has no fate. 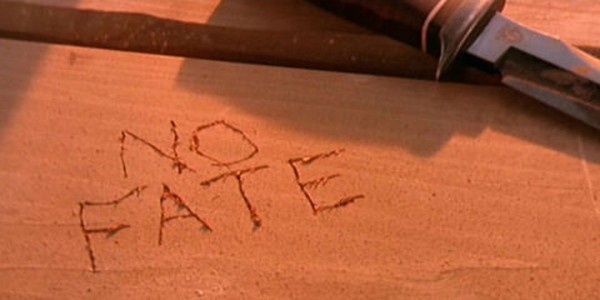 How can the franchise be made to be great again? Well, by learning from the mistakes of the most recent 3 films. A few things that Genisys did well was the villain which- like the second film- was “bigger, badder, and better” than the first. This film paid astounding homage to the original and even expanded the story in surprising ways- which the third and fourth films failed to do. However, the film lacked conviction and was all-around forgettable, mostly because of the confused tone… and the fact that now it’s a cliffhanger without any resolution. So, the best thing a studio could do to make the franchise great again is to hire people who care about the project, even if the last three films in the series have not been loved by audiences- and all three of them aren’t official Terminator films anymore. A studio doesn’t need to pick up where the second movie left off in order to continue the franchise, but the biggest thing to make sure of is that the crew behind it is trustworthy and passionate. Like Predator or Alien, the franchise could be returned to after a few bad movies and still be great (I’m referencing the upcoming The Predator movie written and directed by Shane Black who was in the original, and Prometheus and Alien: Covenant, both directed by Ridley Scott who directed the first). I just hope James Cameron is the next person who says “I’ll be back.” 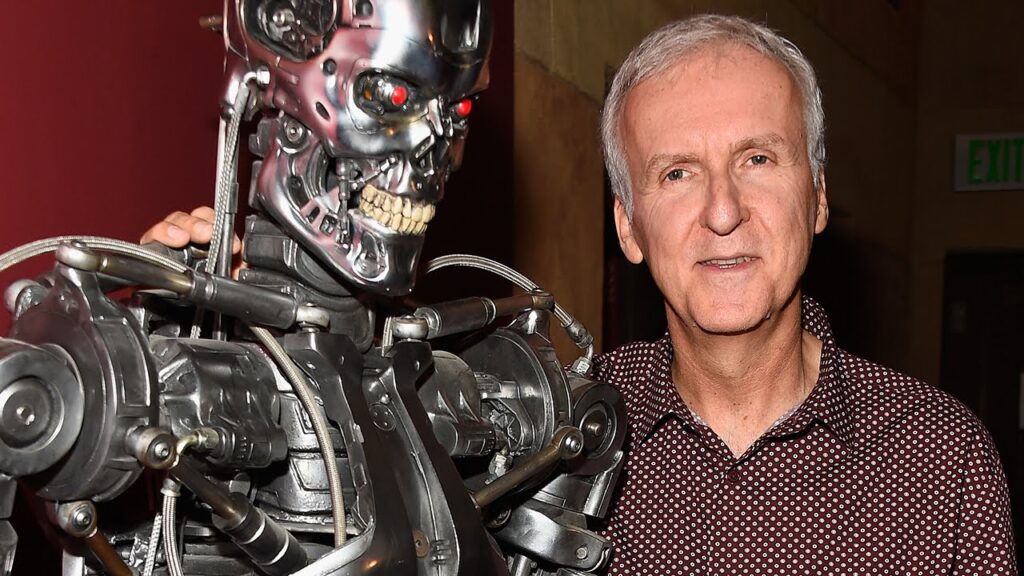 However, that is unlikely since he is filming Avatar 2, Avatar 3, and Avatar 4 back to back… to back. So, my dream Terminator 3 would actually be directed by Alfonso Cuaron (Children of Men, Harry Potter and the Prisoner of Azkaban, Gravity) since he can make great, original films like Children of Men, but also direct great sequels which respect the source material as he did with Azkaban (a movie also involving time travel like Terminator). The best reason I have for Cuaron is Gravity, which swept the technical awards at the 2014 Academy Awards, was nominated for Best Picture, and impressed James Cameron who raved about how much he loved the film. Matt Reeves (Cloverfield, Dawn of the Planet of the Apes) or Doug Liman (The Bourne Identity, Edge of Tomorrow) would also be good choices. I would pick Alex Garland (Ex Machina, Sunshine) and Rian Johnson (Looper, Star Wars: Episode VIII) for the screenwriters since they have penned some genius and entirely original scripts which have amazed audiences and critics alike. As far as the story goes, I think it’s been too long since T2 to try to continue that plot with those characters, but rebooting and recasting would be absolute sins, so a new team of characters should be introduced for a soft sequel but with a heart of it’s own like Mad Max: Fury Road or Creed last year. As far as the rest goes, I think I’ll leave that to the professionals! Come to IU Media Services in Wells Library to check out The Terminator, Terminator 2, and Terminator Genisys (or many of the other films I’ve mentioned) to see what you think can be done to save the iconic series!

Thank you for reading!