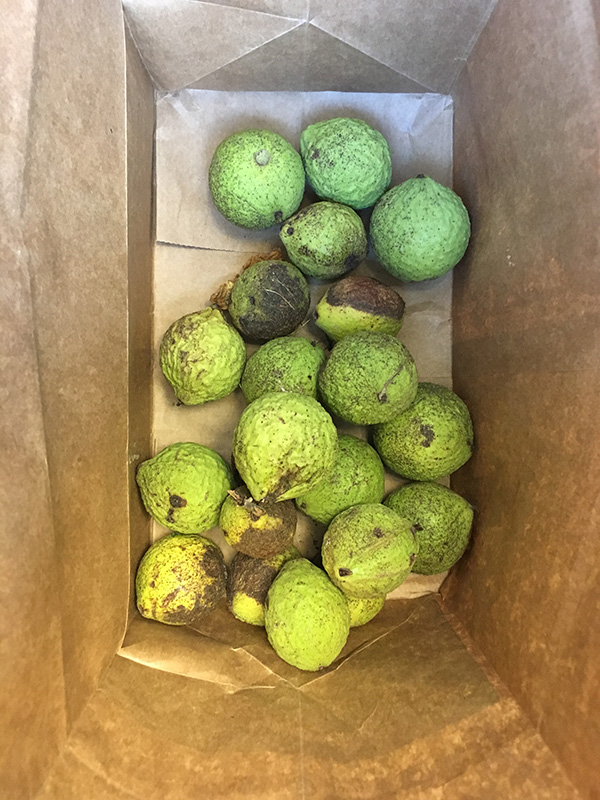 The Preservation Lab was approached recently by Carey Champion, Director of the Wylie House Museum, to collaborate on an upcoming First Thursday event in October, 2019. She had the idea to present writing materials as they existed in the 19th century for students to try out, along with correspondence (or facsimiles) by members of the Wylie family during this time. We rose to the occasion and said we could make some ink out of Black Walnuts (Juglans nigra). In spite of what one can find online, I don’t know of any reliable historic source or scientific analysis that has definitively attributed walnut ink to historic documents or artwork. If anyone out there can send me a citation to a reliable study, I’m interested! Nevertheless, it was likely used as a quick ‘frontier’ ink and is certainly fun to make.

Here in southern Indiana, the green husks of Black Walnuts are coming into maturity and even falling from a few tree specimens around campus and county.  We gathered about 40, and gathered around the bag with smashing implements in gloved hands to strip the green husks off of the nuts themselves. The hulls sat in a bucket overnight to oxidize a bit. The next day they were beginning to turn quite black. The hulls were about 4 liters in volume and were boiled in several stages with additions at certain points. Although the recipe follows, it’s worth pointing out a couple of things:

-Steel wool (ie. iron) was added in order to darken the ink and create what is called a ferric tannate pigment which is insoluble in water. The ink we created is not too dissimilar from iron gall ink, which those of us who work around historic documents are all too familiar. IG ink was the chief manuscript ink for at least the first half of the 19th century.

-Gum arabic was added not as a binder or gloss agent, but as a suspension aid to keep the very fine precipitate particles of ink floating around in solution.

-A small amount of alcohol was added as a preservative, and cloves were added for the same purpose as well as to improve the smell. 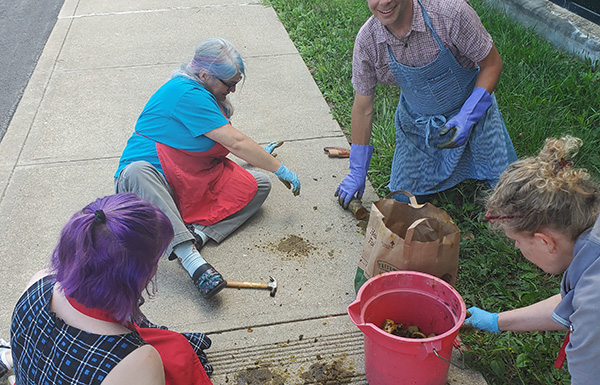 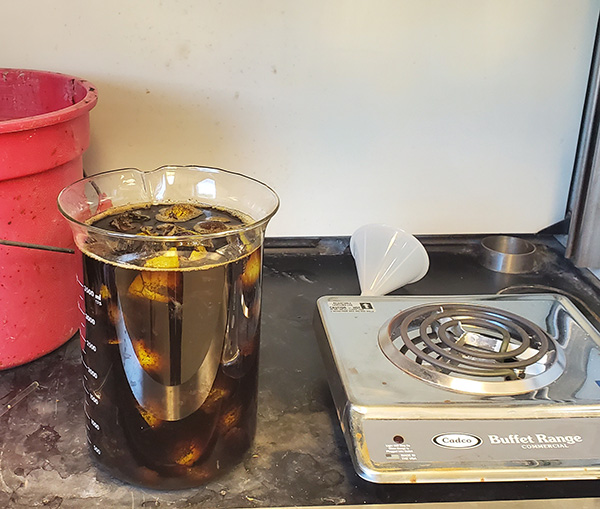 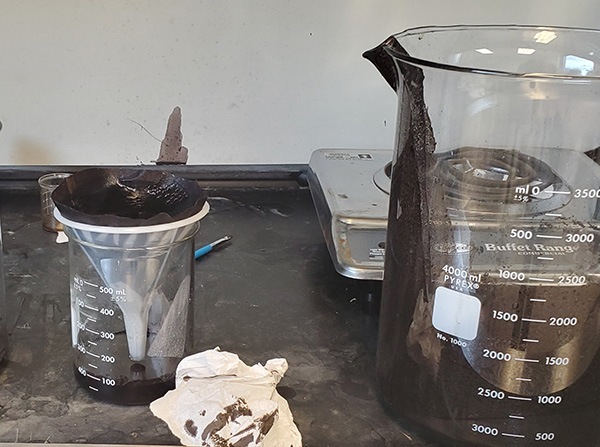 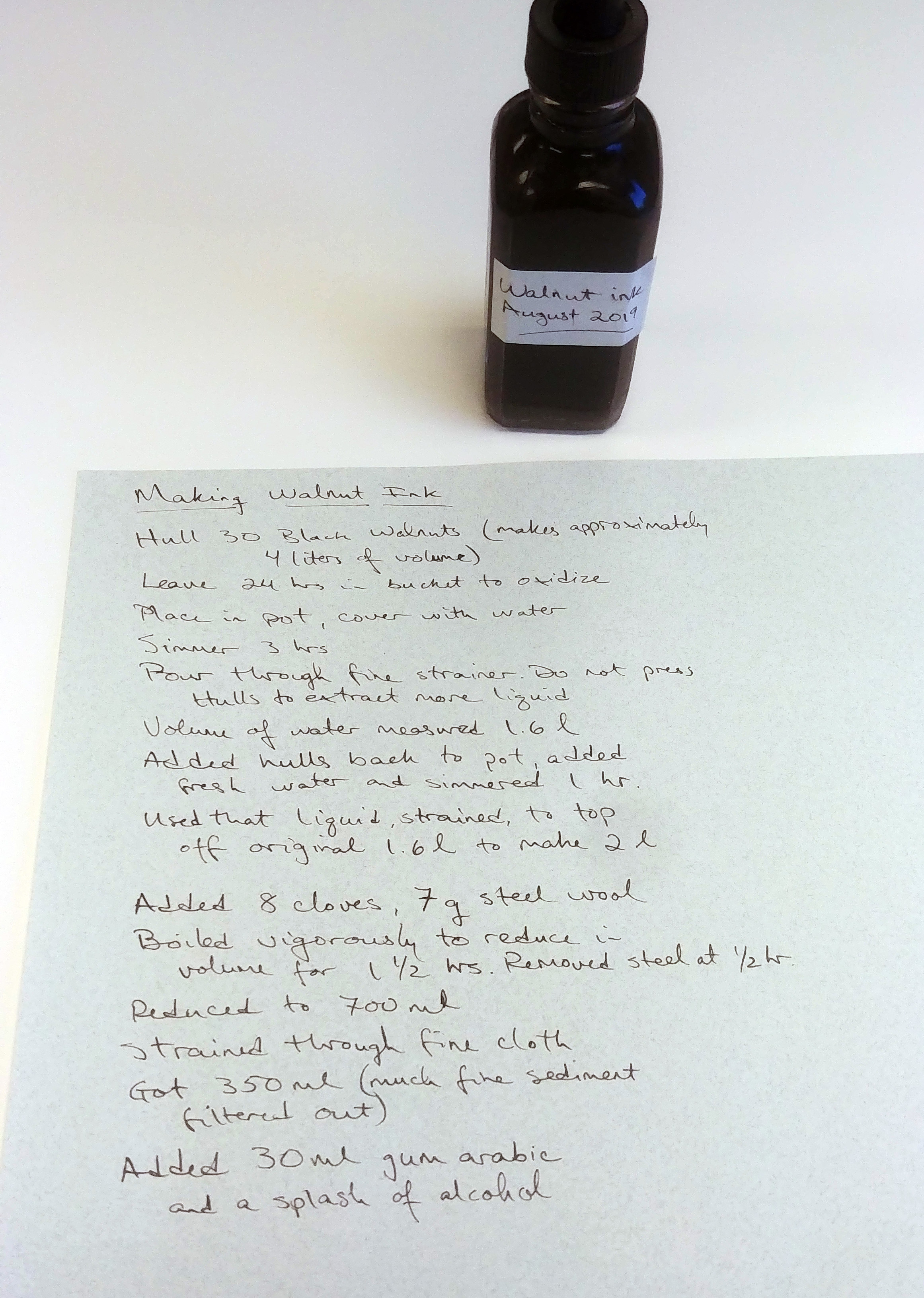 Please stop by the Arts Plaza the evening of October 3 to say hi and try out our ink! 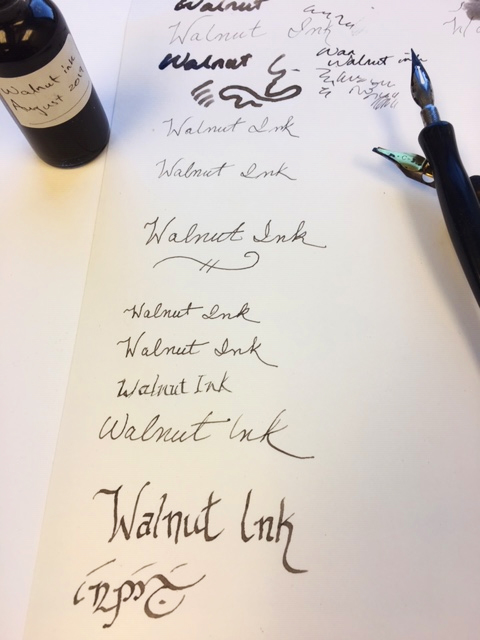