With the approach of another spring break, I thought I might address the question: when did the tradition of a spring break or vacation begin at IU?

The best and most convenient sources of information on this topic are the official calendars which until recently were printed in the IU Bulletins, the first of which was published in 1829.

No Spring Break As We Know It Today
From 1829-1850, IU divided the school year into two terms or sessions each five months long. The first session typically began in November and ended in March, and the second session began in May and ended in September. There were two, month long vacations each year in April and October. No other vacations or breaks are listed in the Bulletins for this time period, so presumably there was not a spring break as we know it today.

In 1850, IU went to a three term or session schedule of the type that we have at the present time, but for the period from 1850-58 the pattern differed somewhat from what we have today. The first or fall session began sometime in September and ended a few days before Christmas. The second or spring session began the first week of January and ended in the first week of April. The third or summer session began in the first week of May and ended the first week of August. The vacations were during the seven week period between summer and fall sessions, and the four week period between spring and summer. Although the four week recess between the spring and summer sessions could be called a spring break (although officially it was not), its length in no way resembles our modern day spring break. One can say, I believe, that this month long vacation belongs to the older nineteenth century tradition of long breaks between sessions with little or no time off during the term or session.

Spring Break Tradition Established
In 1858 the pattern changed. The fall term stayed the same but the other two sessions were altered: the second or spring term ended late in March rather than early April, and the summer session began a week later in April and ended at the end of June or early in July. There is no formal mention of a spring break in the Calendars, but the one week period in early April between sessions has the “look and feel” of a spring vacation that resembles the modern day version. In fact, in the 1872-73 calendar we find the first mention of a “Spring Vacation” occurring in the first week of April 1874. 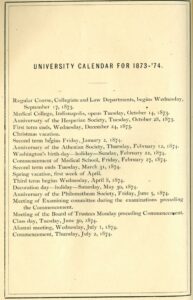