During World War II, Indiana University was not unlike other universities and colleges in that nearly every aspect of university operations underwent a number of changes. Personnel-wise, there were fewer men on campus, and many of them who were in Bloomington were in uniform. 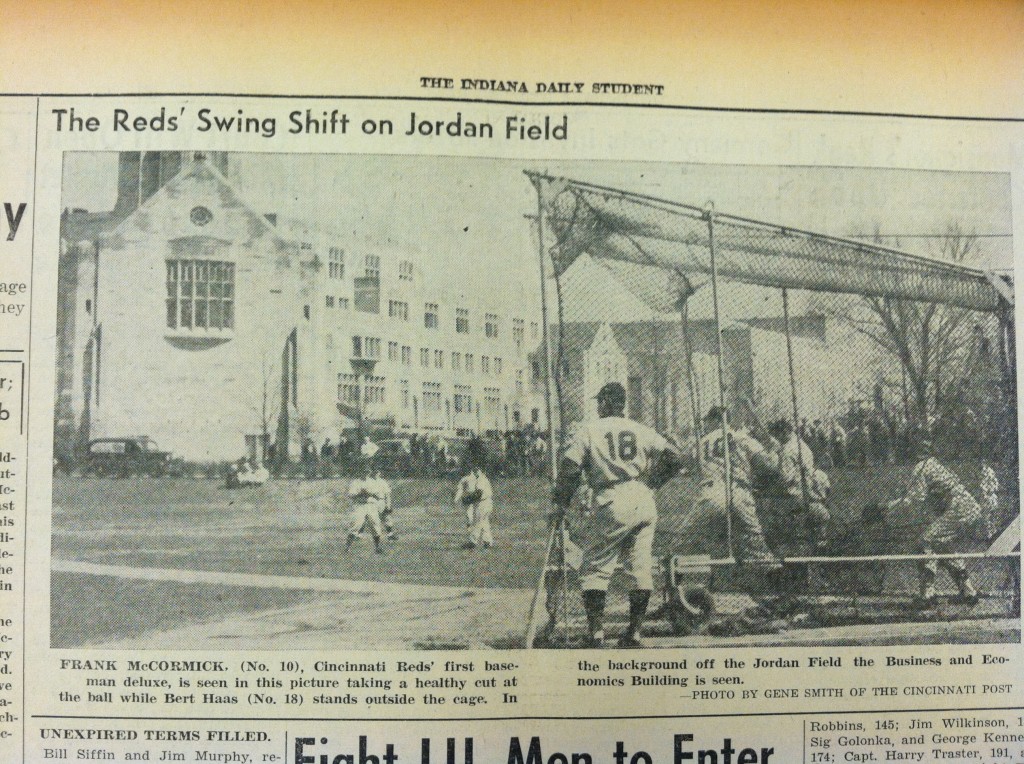 IDS, April 3, 1943. The “Business and Economics Building” is now known as Woodburn Hall.

At the January 11, 1943 Athletics Committee meeting, IU Athletics Director Zora Clevenger reported that seven professional baseball “clubs” as well as the President of the American Association had contacted him inquiring about the use of the fieldhouse (now the Wildermuth Fieldhouse) for spring training. Teams included the Indianapolis Indians, Cleveland Indians, Cincinnati Reds, Pittsburgh Pirates, Brooklyn Dodgers, Montreal Royals, and the Toledo Mud Hens. The Committee recommended Clevenger and IU baseball coach Paul “Pooch” Harrell work with the administration to come to mutually agreeable terms with the Indianapolis Indians and another team.

Within the week, IU President Herman B Wells reported that the members of the Executive Committee had approved the proposal for the Indianapolis Indians and Cincinnati Reds to come to campus. Trustee Feltus must have been a baseball fan – notations on memos regarding the plans indicate he said “we should have them by all means.”

It is not known what terms the university reached with the teams, but in response to a letter of inquiry from the Muncie Star regarding the arrangements, Vice President and Treasurer Ward Biddle stated, “Neither the University nor the City have been asked to defray any expenses in connection with bringing these ball clubs to Bloomington, and we are expecting that we will be reimbursed by them for out-of-pocket expenses in connection with their training.”

The Indiana Daily Student was all atwitter about this development. The Reds were the first to arrive on campus with team news coverage beginning in February followed by near daily reports regarding the teams’ arrivals, preparations, practices, and exhibition games. 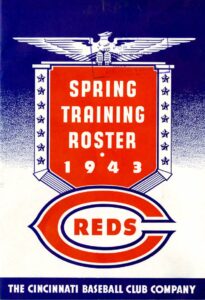 The reporters of the IDS were not alone – this was terrific excitement for Bloomington. The Jaycee’s gave a baseball banquet on March 18 for the Reds at Alumni Hall; tickets could be had for $2 per person. Speakers included Warren Giles, general manager for the Reds, Reds Manager Deacon Bill McKechnie, Ownie Bush, Indianapolis Indians owner, Clevenger, and President Wells. The IDS reported that a few of the more popular Reds players – which at that time included 1939 MVP Bucky Walters and 1940 MVP Frank McCormick — would be asked to “spin a baseball yarn, or two.” Mickey McCarty, managing editor of the Indianapolis News and former editor of the IDS, would serve as master of ceremonies. Due to the shortage of service staff on the war-time campus, the Association of Women Students President Leona Menze called together the sorority presidents to devise a plan to assist. Together they launched “a patriotic program designed to bring in members of every house as volunteer workers for the day.” Payment was given in the form of War Savings Stamps and the participants wore special armbands.

The Reds’ groundskeeper came to campus prior to the team in order to prep Jordan Field (now home to the IMU parking lot), though the team planned to begin training in the Fieldhouse until weather improved. Work included raising the pitching mound, enlarging the infield, and in general, just smoothing out the field.

The team was housed at the Graham Hotel in town (now the Graham Plaza at 205 N. College), from which they walked to the 10th Street stadium (current home to the Arboretum) to use the locker facilities before heading over to the Fieldhouse for four hours of daily practice. The IDS reported that during the Reds first practice “several hundred male students” gathered to watch.

The first members of the Indianapolis Indians began arriving on March 27 with the entire team due to land in Bloomington by April 1 or shortly thereafter. Those familiar with Southern Indiana springs can guess that the weather was the biggest hurdle facing the two teams (well, with the exception of Reds player Bucky Walters, who tripped over a hurdle and bruised his heel whilst warming up one day). The Indians first outdoor drill was cut short when the winds became too much for the players.

On April 8, however, the IDS reported on the first exhibition game held the previous day between the Reds and Indians on Jordan field. The Reds triumphed over the Indians, 8-6, in front of a capacity crowd of 2,000 students, townspeople, visitors, soldiers, and Marines. The Indiana weather became a factor for the next Reds exhibition game. The Chicago Cubs traveled from their spring training home of French Lick but alas, the game was cancelled due to rain. With that sad note, the Reds training camp came to a close and the Indians were left with ample Fieldhouse space for their next few weeks of conditioning. 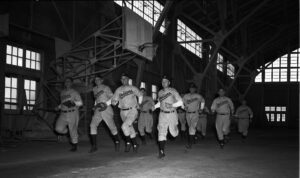 In what must have been crazy-exciting for the IU team, the Indians scheduled an exhibition game with the “Harrellmen” on April 13. But once again, the weather interfered – it snowed. In April. They rescheduled for the 15th but were thwarted by more snow. Unfortunately, there was not enough time to reschedule a third time, as the Indians departed campus on the 20th, bound for Terre Haute where they planned to play the Minneapolis Millers in two exhibition games. (Weather cooperated in 1944, however, and the IU team defeated the Indians, 5-3!)

The professional teams were wholly satisfied with the campus facilities and both returned the following year, much to the enjoyment of Bloomington baseball fans.

Want to read some more about this brush with baseball fame? The IDS is available on microfilm in the Government Information and Kent Cooper Services on the 2nd floor of the Wells Library. Also, as I researched for this story, I copied the bulk of the newspaper articles and they are available in the Archives – contact us for access!