The fall of 1918 was a doozy for Indiana University, and it had nothing to do with the weather. 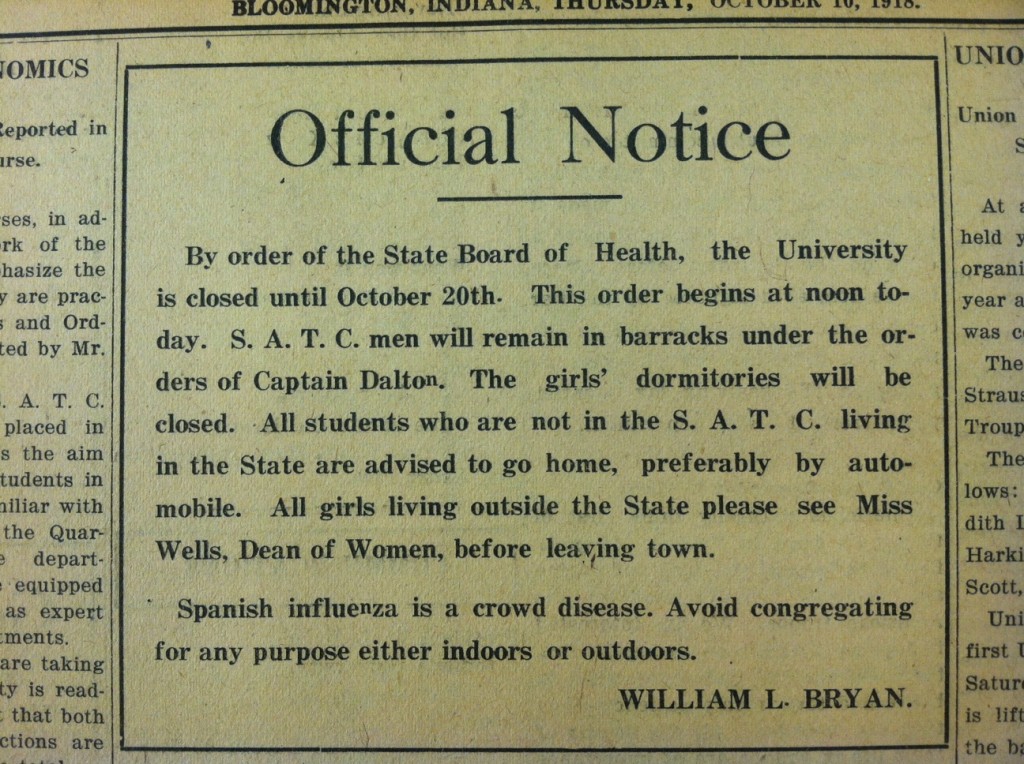 The 1918 flu pandemic – the “Spanish flu” – had arrived on campus. University officials scrambled to keep it in check, which would have been a challenge under the best of circumstances. IU, however, was not under the best circumstances that semester. It faced its highest enrollment to date of nearly 2,000 students, with half of them men serving in the Student Army Training Corps (S.A.T.C.) and living in barrack-style housing in government-appropriated fraternity houses. 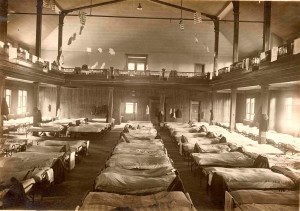 Initially administrators encouraged students to get vaccinated and to take other precautions to prevent the spread of the flu but before long students were being quarantined both within the S.A.T.C. barracks or to campus. By October 10, as pictured above, the State Board of Health ordered IU closed. S.A.T.C students, however, had to answer to the Army, who had them remain in the barracks. As more and more students fell victim to the flu, it became necessary to set up temporary hospitals on the main floor and balcony of Assembly Hall (not the present day building!) and the Student Building.

Parents of S.A.T.C. students and others who had fallen ill were understandably concerned about their loved ones. The Archives holds a logbook from the University Hospital in which nurses logged communications with parents and the President’s files holds numerous letters and telegrams from concerned family members. 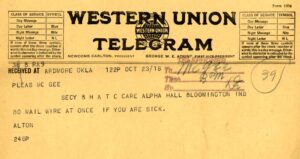 In his diary, S.A.T.C. corporal William R. Ringer, wrote about his own brush with the illness:

Friday, October 18, 1918
It was on Wednesday, October 8 that I began to feel badly. Nevertheless I went to drill and marched my squad good and hard for the two hours, and while I was doing it, I felt very well, but when I went to Business Organization, I felt rotten, and could scarcely hold up my head while Rawles rambled away. I went right out to the house and went to bed. The next morning I felt rotten, and did not get up until 7:30. There were four of us [who] stumbled down to the infirmary where there was the sickest looking bunch of fellows I ever saw. He ordered us to the hospital, so we walked back to the barracks and lay there all day until a taxi came for us. I was put on a cot on the lower floor after some delay, and there I settled down for 6 days sickness….They took good care of us, gave us plenty of very good food. One of the nurses, a peach, who teaches in B.H.S, she was mighty nice to me….

While initial plans were to reopen on October 20, IU was not able to resume classes until November 4. The worst of the outbreak was over for the campus but students were still instructed to exercise caution – on November 7, the IDS ran a notice from the Dean of Women that there were to be no dates that weekend and that “compliance with this request indicates loyalty to humanity and to the community.” All in all, the university fared well through this outbreak. In his History of Indiana University, the late IU professor James Woodburn reported that nationally, there was a 4% death rate; at IU, 350 patients were hospitalized with 3 deaths, or a death rate of less than 1%.

There was another round of outbreaks early in the spring semester and students were again placed on restrictions, but the number of students afflicted was nowhere near the October and November numbers.

Want to know more about this or view Mr. Ringer’s collection in the Archives? Contact us! The IDS provided extensive coverage of the campus response to the flu and is a terrific resource. The newspaper has been microfilmed and is available on the 2nd floor of the Wells Library in the Government Information & Kent Cooper Services department. Ask at the desk and they will help!