This semester, I am interning with the Digital Library Program.  The project that I am working on is for the Archives and consists of creating a digital version of The Vagabond, which is a satirical student literary magazine from the 1920s and 1930s.  This magazine has essays, poetry, visual art, short stories, criticism, and humor, which often target Indiana University undergraduates, alumni, and faculty.  Reading this magazine has been an interesting look into the past.  I would highly recommend reading this magazine when we finish the project, but before you do that, it might interesting to look at the people behind the publication.

Getting to know the people behind The Vagabond and connecting those people to the articles that they wrote is a slight challenge due to the fact that many of the writers used pseudonyms.  Yet, not all the writers used pseudonyms and some that did, made the pseudonym very obvious.  For this post, I thought that it would be nice to have pictures to go with the writers, so I went to the Arbutus.  There, I found pictures of some of the members of The Vagabond.  The pictures list some of the members, but not what pseudonym they used, making it difficult to tie the person to his or her work.  For this post, I am only going to focus on people whose articles can be identified, though this will not be a comprehensive listing. 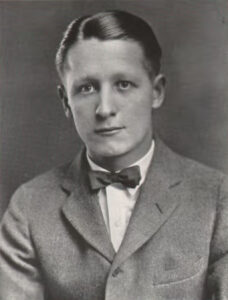 Let’s start with Philip Blair Rice. He was part of the original team (some even called it his “brain-child”) that started The Vagabond. He wrote off and on during its span, writing a variety of works including poems, plays, and stories. While at Indiana University he studied philosophy.  In 1925, he became IU’s 4th Rhodes Scholar and went on to study at Balliol College, Oxford.  He taught at different colleges until he accepted a position at Kenyon College in their English department.  Some of his achievements include becoming president of the American Philosophical Association, being awarded the Guggeheim Fellowship and the Bollingen Fellowship.  He also wrote a book titled On the Knowledge of Good and Evil, which is available from the IU Libraries, and many articles.  To read some of these articles, do an Author Search in JSTOR for “Philip Blair Rice.” He died in February 1956.

Next to P.B. Rice, William Ernest Moenkhaus was probably 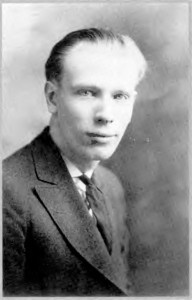 one of the most well-known Vagabond writers, even though he always wrote under a pseudonym.  The name he used most often was Wolfgang Beethoven Bunkhaus, but he also wrote under the names Lena Gedunkhaus, Oscar Humidor Martin, and Roland McFeeters.  To his friends he was Monk.  He led a rather interesting, though short life.  He was born in Bloomington, Indiana on June 30, 1902.  He spent some years in Switzerland and it was only due to World War I that he returned to the United States.  He was known for playing the piano and cello and could write music as well as he could write literature.  This ability with music led to a close friendship with Hoagy Carmichael.  In The Vagabond, he wrote plays, poems, and other works that inspired others to look at the everyday in a different light.  He graduated in 1929, with a Bachelor of Music, but he would have little chance to use this degree as he died on January 17, 1931.  To read more about his life, check out Stardust Melody: The Life and Music of Hoagy Carmichael, which has a chapter titled “Monk”. 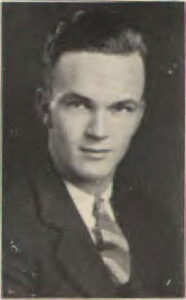 Another friend of Hoagy Carmichael’s that wrote for The Vagabond was Howard Warren “Wad” Allen.  Wad Allen was musically inclined, but also wrote poems, essays, and stories often under pseudonyms such as Sir Polonius Panurge and Tod Owlin.  He graduated in 1926 with a Bachelor of English.  After graduating, he became a reporter for the Anderson Herald, before moving on to work at the New Jersey Bell Telephone Company doing advertising.  He would later become the Vice President and Chief of Public Relations for Johns-Manville Corporation.  To hear about his retirement from the company check out “Wad Allen [sound recording] : retirement tape” available from IU’s Archives of Traditional Music. He also was interviewed on January 18, 1973.   In this interview, he discusses many topics relating to Indiana University, including The Vagabond.

Another writer for The Vagabond was Robert 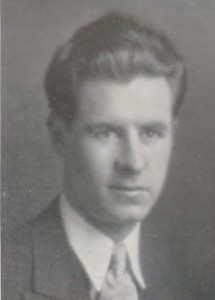 Fink. He was editor of The Vagabond for the school year of 1929-1930, which was after The Vagabond had a two year period of only being published once each year.  His leadership brought the publication back to its previous level of publishing, with 4 editions that year.  He wrote poems and also did translations for The Vagabond.  He graduated with a Bachelor of Arts in 1930.  He continued his education going on to receive a Master of Arts from Cornell and a Ph.D. in Classics from Yale University in 1934.  He taught at a variety of colleges and universities including Kenyon College and State University of New York.  He wrote three books, which are all available through IUCAT, though his first, The Feriale Duranum, is not available for checkout but may be read in the library. He died in December 1988. Check out “In Memoriam Robert O. Fink” by William E. McCulloch, available through JSTOR, for his obituary.

These are just a few of the writers from The Vagabond, but as you can see these writers were outgoing, intelligent people, who felt the need to inspire change in others.  For more information about the people who wrote, check out resources such as the Arbutus and The Vagabond itself, which are both available in the University Archives.