Cyrus Nutt served as Indiana University’s fifth president, and despite what his title may suggest, not much of a record exists for the former president. It’s likely that records related to his presidency were lost to a fire, so this small collection comprises most of what we have from his time in office.

Nutt was born in Trumball County, Ohio in 1814, and he held a number of educational positions and served as a Methodist minister before becoming the university’s president. He graduated from Allegheny College in Meadville, Pennsylvania, in 1831, and upon completing his studies served as the principal of the College’s Preparatory Department. He later moved to a similar position at Indiana Asbury University (now DePauw), which he held until 1843 when he began pastoral work in the Indiana Conference at the Bloomington station. He then returned to Asbury before serving as president of the Fort Wayne Female College and Whitewater College. Between 1855 and 1860, he resumed his work in the ministry and served as both a mathematics professor and president at Asbury. 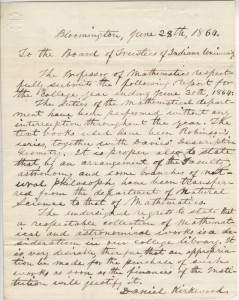 A report on the Mathematics Department to the Indiana Board of Trustees, 28 June 1864, signed Daniel Kirkwood

In 1860, Nutt was elected president of Indiana University, and his records reflect his day-to-day duties – reports to the Board of Trustees, correspondence, and addresses to graduating seniors. We know that his presidency also saw a few ambitious changes in the University. In 1867, the Board of Trustees voted to admit women to classes, and around the same time the university experienced the beginning of organized athletics as students began to embrace the game of baseball. The junior and senior-class-controlled newspaper The Student also was founded that year. Throughout his presidency, the University attempted to create an agricultural and mechanical school under the terms of the Morrill Act, though by 1869 Purdue was established as the land grant college of Indiana. 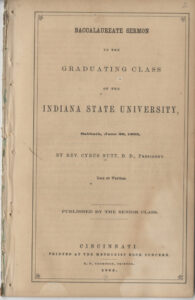 Nutt also presided over the university during the unstable and uncertain years of the Civil War. In his 1863 “Baccalaureate Sermon,” delivered just days before the Battle of Gettysburg, Nutt railed against the South, writing that they have “placed in the scales our once glorious Union and Constitution – the flag of our common country – the Government established by our fathers, so NOBLE and FREE; and, in their estimate, the whole is greatly overbalanced by the advantages of a separate Southern empire! The bones, the blood, the lives of their patriotic sires, their pledges and oaths, their loyalty, their consciences, their manhood, they have deliberately bargained and sold for the fancied benefits of disunion.”

Near the end of his sermon, Nutt hints at the incertitude of the time, asking: “Shall this Republic be preserved, and the great destiny which God has designed for it be fulfilled? Or shall the hopes of humanity be disappointed? Shall the glorious sun of freedom, now shining in these western heavens, go out in the darkness? Shall the lamp of Liberty be extinguished here in her last and chosen habitation, and despotism hang its midnight pall over the world forever?”

Of course, the United States remained intact, but in the early 1870s, Nutt was finding it increasingly difficult to keep the students on his side. Although the reasons are not known entirely, during the final years of his presidency tensions rose between President Nutt and the students. Some of our best evidence comes from a copy of The Dagger, a bogus student newspaper published in March 1873. Students lamented the number of “soreheads” on the faculty and attacked Nutt in a poem called “Our President’s Origin,” in which they imagined the devil’s imps creating Nutt as a “senseless beast in the image of a man.”

In 1875 the Board of Trustees dismissed Nutt, likely over internal problems with the board and the students. Nutt died on August 24, 1875, approximately one month after his dismissal.

To learn more about Cyrus Nutt or any of IU’s presidents, please contact the Archives!