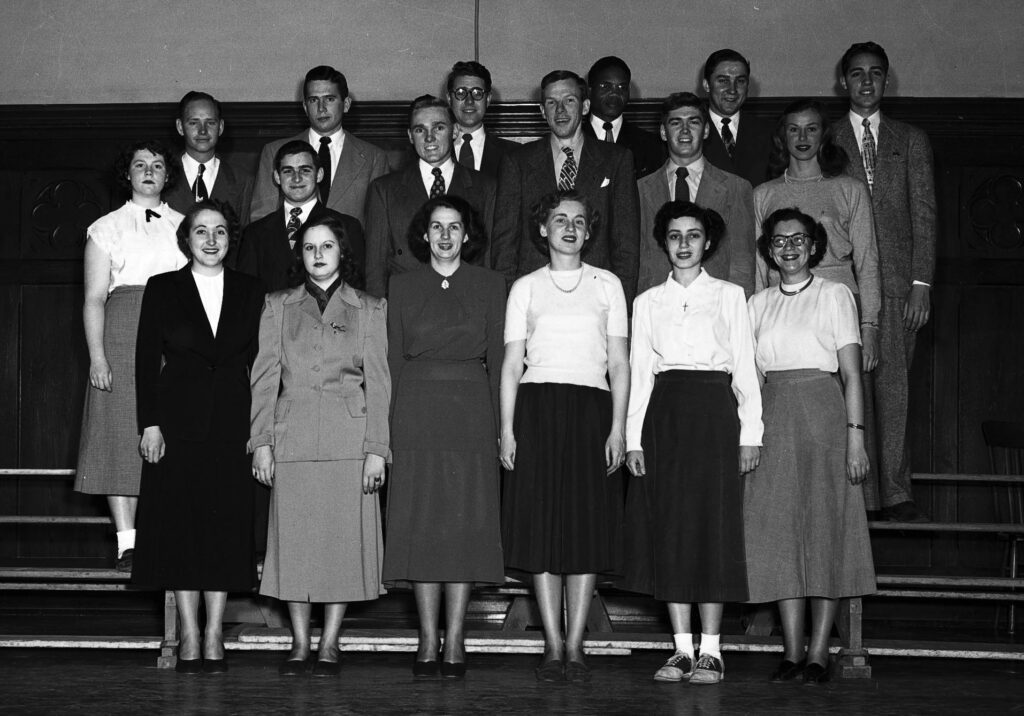 The Student Religious Cabinet in 1949

If you are looking for insights into university life during the late 1930s through the early 1950s, the records of the Student Religious Cabinet will provide an interesting perspective. From its name, one might assume that the goal of the religious cabinet was a narrow one, but in fact this student organization was concerned with a variety of issues. From eliminating racial segregation to promoting collaboration among members of all religious denominations, the Student Religious Cabinet sought to do good works in their community and beyond by focusing on the commonalities between all people rather than the differences.

The Student Religious Cabinet was established as a result of Indiana University’s Committee on Religion. This committee had been formed by President Herman B Wells a year earlier in order to support and bring about collaborative efforts between all religious groups represented by the students and faculty of IU. The Executive Secretary for this committee, Frank O. Beck, helped to organize the Student Religious Cabinet and participated in many of the Cabinet’s meetings and activities. Initially, there were four main groups represented by both the University Committee on Religion and the Student Religious Cabinet: Catholicism, Judaism, Christian Science, and Protestantism. The primary goal was to include representatives on the Cabinet from all student religious organizations. 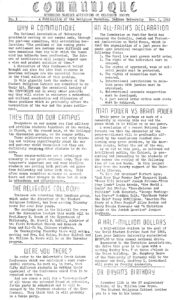 On October 2, 1938 the Student Religious Cabinet held their first meeting with thirteen students in attendance. They would continue to meet on the first Sunday of every month for breakfast, fellowship and business. Throughout the Cabinet’s years of activity (1938-1951), their roster grew to include around forty members and they became extremely active on campus, in the Bloomington community, and beyond. The Cabinet sponsored events to raise money for student refugees, wrote letters to protest discrimination toward African-American students at IU and at other universities, hosted peace rallies, bolstered morale during World War II, to name just a few of its endeavors.

In addition to hosting a variety of events and activities, the Student Religious Cabinet also maintained two weekly publications. The first publication was The Voice of Religion on Indiana University Campus. This single page newsletter was published weekly and announced events and activities hosted by the Cabinet. The other publication, The Campus Home Front, was for a more particular purpose, namely the war effort. Its goal was to build “war time morale on campus, thus aiding in winning the war and winning the peace.”

Our collection here at the archives includes the Student Religious Cabinet’s meeting notes from October 1938 through April 1951, as well as several issues of The Campus Home Front and a near complete run of The Voice spanning 1939-1947. These documents provide a unique and intriguing view into how university students from another time not only dealt with, but also tried to overcome issues of war, race and religion.

If you are interested in viewing this collection, good news! The IU Libraries Digital Projects and Services department has recently completed scanning the collection in its entirety and it is now available online! Contact the Archives for any questions!