It may surprise some to know that a collection comprised of the records of a former dean of the College of Arts and Sciences, namely that of Frank T. Gucker, 1938-1967, can actually be quite interesting. But in fact, this was the case. From interesting words used in everyday memos, such as “dashing,” “mellifluous,” “peripatetic,” and “bailiwick,” to a 1961 folder entitled “Teaching Machines” (this was the time of pre-Internet and manageable-sized computers) small tidbits of conversation and gems of information are sprinkled throughout this collection.

Some of the most interesting information came from discussions about the Intensive Language Training Center. While the University Archives does have a separate collection of Indiana University Intensive Language Training Center records which provides more substantial information about this program, in the context of the Dean of the College of Arts and Sciences records language program folders also address the ILTC.

To provide some background about what this program actually was, I’ll refer to the finding aid available in the Indiana University Archives Online. First created at IU in 1959 under the name, Air Force Language Program, the program was initially for the training of U.S. military members to speak Russian. In 1962, in order to move past U.S. Air Force affiliated programs, the name was changed to the Intensive Language Training Center (ILTC). It was at this time that the ILTC fell under the domain of the College of Arts and Sciences, becoming fully a part of the university. The following year, the ILTC became part of the Department of Linguistics, directed by Orrin Frink overseeing contracts with the Peace Corps as well as others and the Defense Language Institute (DLI) was established to standardize language training across military personnel. 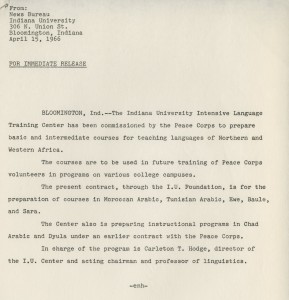 That being said, this collection contains correspondence regarding perceived improper use of the Language Lab, and its availability to students as well as people from the military training programs. Additionally, something I found interesting and slightly ‘political-intrigue-spy-movie-mystery-esque’ was a “directive” from the Embassy of the United Arab Republic to the Indiana University Egyptian student population, informing them that “neither they nor their wives are allowed to teach in the Language Center (formerly a division of the Air Force) or have any relationship with it.” The letter is dated July 9, 1963 and directed to Mr. Loutfy Zaki from Mostafa Issaka Cultural Attache. The letter further states, “Any disobedience to that ordinance means automatically that you will be subject to the punishment specified in that ordinance.” Doing a bit of background research into just what the United Arab Republic was and what this time period may have signified, I found that the United Arab Republic constituted a political union of Egypt and Syria, lasting from 1958 to 1961. In 1961, Syria withdrew following a military coup, soon followed by Yemen, thus ending the union. Egypt apparently continued using the name until 1971.

Needless to say, this collection’s span of almost 30 years (with the bulk of the collection from 1960-1964) reflects the times. From U.S. social movements and conflicts, affirmative action, the Kennedy Administration, to international conflicts of the time, including warring Middle Eastern countries including Yemen, Saudi Arabia and the United Arab Republic (later Egypt), this collection holds up a mirror to these times and shows just how an academic institution, and particularly the college of arts and sciences, was impacted by the surrounding social and political culture. So don’t discount administrative records in a university archive when looking for interesting morsels of information and research fodder, because you never know what you might find tucked away!