Today’s Bloomington Herald Times reports the return of one of the stolen fish! Read the history of this campus centerpiece Carrie’s post below, originally published May 2011.

As covered by the Indiana Daily Student, on Friday morning workers from the IU Physical Plant again reinstalled the five fish of Showalter Fountain following a tumultuous year involving two separate events in which one was stolen and never recovered and another in which one was severely damaged. By the time of this weekend’s commencement activities, the familiar spray of mist from the fountain should again be wafting through the plaza, just in time for traditional photo opportunities.

While the historic record can’t exactly explain why the fountain continually becomes a target – that  is something more of student lore – there is a long history documenting the conceptual development of the  campus landmark.

As early as 1939, architectural drawings from the primary architectural firm for the university, New York based Eggers and Higgins, proposed what was then referred to as a “Fine Arts Group.” The proposal  (shown here) included proposed locations for a Hall of Music – now the Auditorium (1941) – the Fine Arts Building (1962), an Open Air Theatre on the site of the present day Lilly Library  (1960) and a fountain to be located in the central plaza created by these buildings. 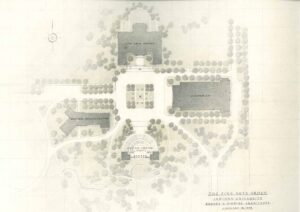 Following the completion of the Auditorium in 1941 and well before the other two buildings, President Herman B Wells and Ward Biddle (the first Director of the Indiana Memorial Union) further advocated for the construction of a monumental fountain for this central plaza. In the IU Archives’ collection of architectural drawings, the first detailed proposal from Eggers and Higgins for a “Memorial Fountain” (shown here) dates from 1943.

Featuring native Indiana limestone and four seated figures representing music, sculpture, painting, and drama, corresponding to each of the proposed adjacent buildings, the concept was much more Neoclassical in style when compared to the modernist landmark we have today.  Despite these early proposals, it was nearly another ten years before progress was made on a fountain.

While Eggers and Higgins continued to serve as the supervising architects for the project and outlined most of the overall design for the fountain itself, in 1952 Robert Laurent (Professor of Fine Arts from 1942-1960) was selected to design a sculpture to serve as the centerpiece of the fountain basin. His design eventually culminated in the 15 foot bronze water-spewing rendition of the mythological story of The Birth of Venus that we know today.

Born in Concarneau, France, Robert Laurent immigrated to the United States at the age of 20 to study under the American modernist painter Hamilton Easter Field. Following service in the First World War, Laurent returned to Brooklyn in 1919, where the young sculptor’s work began to evolve, transitioning over the years from woodcarving, alabaster, modeled clay, limestone, and eventually to cast bronze. Upon the invitation of Henry Hope (Chairman of the Department of Fine Arts) in 1942, Laurent joined the Indiana University faculty, where he remained until his retirement in 1961.

Today, Robert Laurent’s works can be found in major art collections around the world including: several at the Indiana University Art Museum, the Art Institute of Chicago, Whitney Museum of American Art, the Metropolitan Museum of New York, The Museum of Modern Art of New York, as well as outside spaces such as Radio City Music Hall in New York City and Fairmount Park in Philadelphia.

Several other Laurent sculptures grace the university campus including the allegorical figures Music and Dance (1949) which can be found in the north and south niches of the Auditorium’s foyer and a large relief Truth, Daughter of Time or Veritas Filia Temporis (1959) which can be found on the exterior wall of Ballantine Hall.

THE DESIGN and CONSTRUCTION OF THE BIRTH OF VENUS

While on sabbatical leave from IU in 1954, Laurent served as an artist-in-residence at the American Academy in Rome. It was there he began to conceptualize his design for the fountain, inspired by the bronze fountain 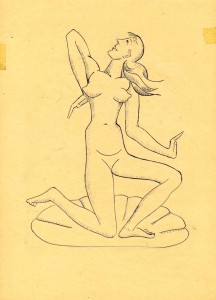 groups of the artist Carl Milles at Cranbrook and in St. Louis. With the original intention of creating the sculpture in marble, Laurent was influenced by the essence of the Roman fountains and fell in love with the lost wax process, a traditional Italian 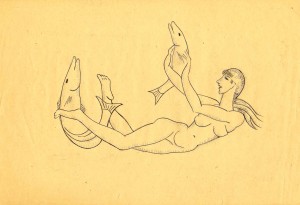 technique of bronze casting. Included here are two of three early preparatory drawings from the IU Archive’s collection documenting the development of Laurent’s concept for the sculpture. A forth drawing is housed in the collection of the Indiana University Art Museum.

The execution of the bronze casts for the sculpture were completed by the Nicci Foundry in Rome during the summer of 1958 and were shipped to Bloomington the following winter. In July 1960, while Laurent was still in Rome, the contract for the building of the fountain was authorized and in the spring of 1961 they broke ground. Eggers and Higgins supervised the completion of the fountain including: the design of the fountain basin and the installation of the fish jets of water, mosaic floor, and lighting. Today, the mechanical and visual features are taken care of by IU’s Physical Plant.

Shortly following the completion of the fountain, a dedication ceremony was held on Sunday, October 22, 1961 in the Fine Arts Plaza (by this point the Lilly Library was complete and the Fine Arts building was in the final planning stages). In his dedication address, President Herman B Wells acknowledged the contributions of Mrs. Grace Showalter whose gift to the University in memory of her late husband, Mr. Ralph W. Showalter made the fountain possible. 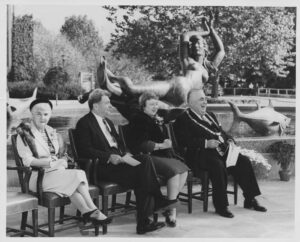 For Wells, the fountain stood proudly in the center of the plaza as a symbol. For as he said,

Indiana University has long been outstanding in the sciences and in the professions. Yet it remembers its ancient foundation upon the classics. Today in dedicating this magnificent Fountain with its central figure the goddess of love, truth, and beauty, we proudly reaffirm our belief in the importance of the arts and the life of the spirit.

For further information about the history of Showalter Fountain, you can listen to last spring’s WFIU Artworks interview which coincided with the IU Archives exhibit Showalter Fountain: The Venus of Indiana University and the IU Art Museum exhibit The Great American Sketchbook.