In the early 1960s, women across the nation started to rise up to further combat the social and cultural inequalities they were experiencing. They yearned for equality in the workplace. They wished to see changes in custody and divorce laws, so that they could go to court confident in their ability to actually win their cases. Many wanted to draw attention to domestic violence issues. Overall, women wanted to break down the barriers being placed in front of them and have their voices be heard. Their efforts eventually culminated into what is known today as the Women’s Liberation Movement, which continues to do its part in changing our world today.

These very same sentiments took hold of the women at IU and within the Bloomington community in the late 1960s. Alumni Ruth Mahaney (’70) and Nancy Brand(’73) discuss this in detail in their interview with the IU Bicentennial Oral History Project.

According to Ruth, she and other women became more interested in the issues surrounding women’s rights following their involvement in the Vietnam War Protests because they felt that they were not seen as equals in the movement. At one point in the interview, Nancy describes her feelings of inferiority after talking to her husband about a rally she attended in DC saying:

After learning more about what other campuses were doing across the country, Ruth and many other women dived headlong into the Women’s Liberation Movement and started up support groups for women on campus. Nancy states in the interview that by the time she came to campus in 1969, IU already had multiple support groups fully established. 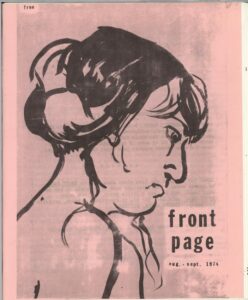 IU’s Women’s Liberation Movement soon grew out of support groups and went on to achieve a number of notable accomplishments. In the early 1970s, members created a newsletter entitled the Front Page to bring attention to important topics related to the feminist movement and discuss local issues regarding women’s rights. It also acted as an outlet for women to publish their more creative endeavors.

At first the Front Page seemed to publish anything that came across their doorstep. They mainly printed critiques, essays, articles, poems, and illustrations. Some issues, however, contained interviews with various women trying to make their way through various working conditions or perhaps describing prejudices they’ve encountered in the world. 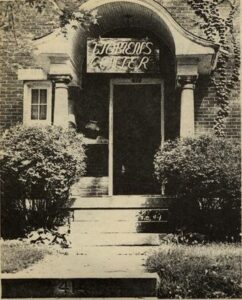 Ads for self-defense classes, daycares, civil rights conventions, women’s groups, and even piano lessons plastered its pages. The wide-ranging focus of the newsletter was perhaps an attempt to include all women who wished to get their thoughts and stories out into the world. After the January-February 1975 newsletter, the editors introduced more topical themed issues to better focus the content.

It was also around this time that the group procured a house and established a Women’s Center which, according to Mel Dennison, “…was formed to be a meeting place, crash pad, information service, clearing house of feminist ideas and repository of feminist literature” (from the Nov-Dec 1974 issue of the Front Page).  IU’s Women’s Handbook Spring ’75 contains a write-up on the house advertising its services and describing some of its accomplishments. 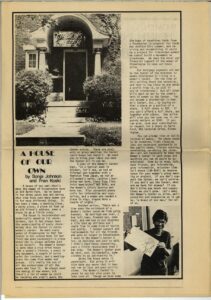 One of the things listed was that the house acted as a meeting place for the Front Page newsletter. In the lower right hand corner of the article (see below), you can see a woman holding the August-September 1974 issue of the Front Page.

According to Nancy, some of the other achievements included the establishment of the first international conference for groups trying to set up cooperative daycare centers. Their efforts also eventually produced a rape crisis center which developed into Bloomington’s Middle Way House.