Over the past few weeks, I looked for love in all the right places, namely, within the University Archives! On February 1, the Archives sponsored a Pop-Up! exhibit, “Love and Friendship in the Archives.” In honor of Valentine’s Day, the exhibit examined love and friendship contained in the Archives’ collections. I worked on the exhibit, which allowed me to discover part of the long history of love at IU.

On one hand, I learned about IU traditions and campus spots associated with love. For instance, there was the Board Walk, a path that crisscrossed the Old Crescent, stretching from Indiana Avenue to Forest Place (now home to Ballantine) and was known in the early decades of the twentieth century as the “lover’s lane” of campus. There is also the “Spooning Wall” or the “Lovers’ Wall,” which still stretches along Third Street. Hoagy Carmichael is said to have found his inspiration for “Stardust” while sitting on the Lovers’ Wall. 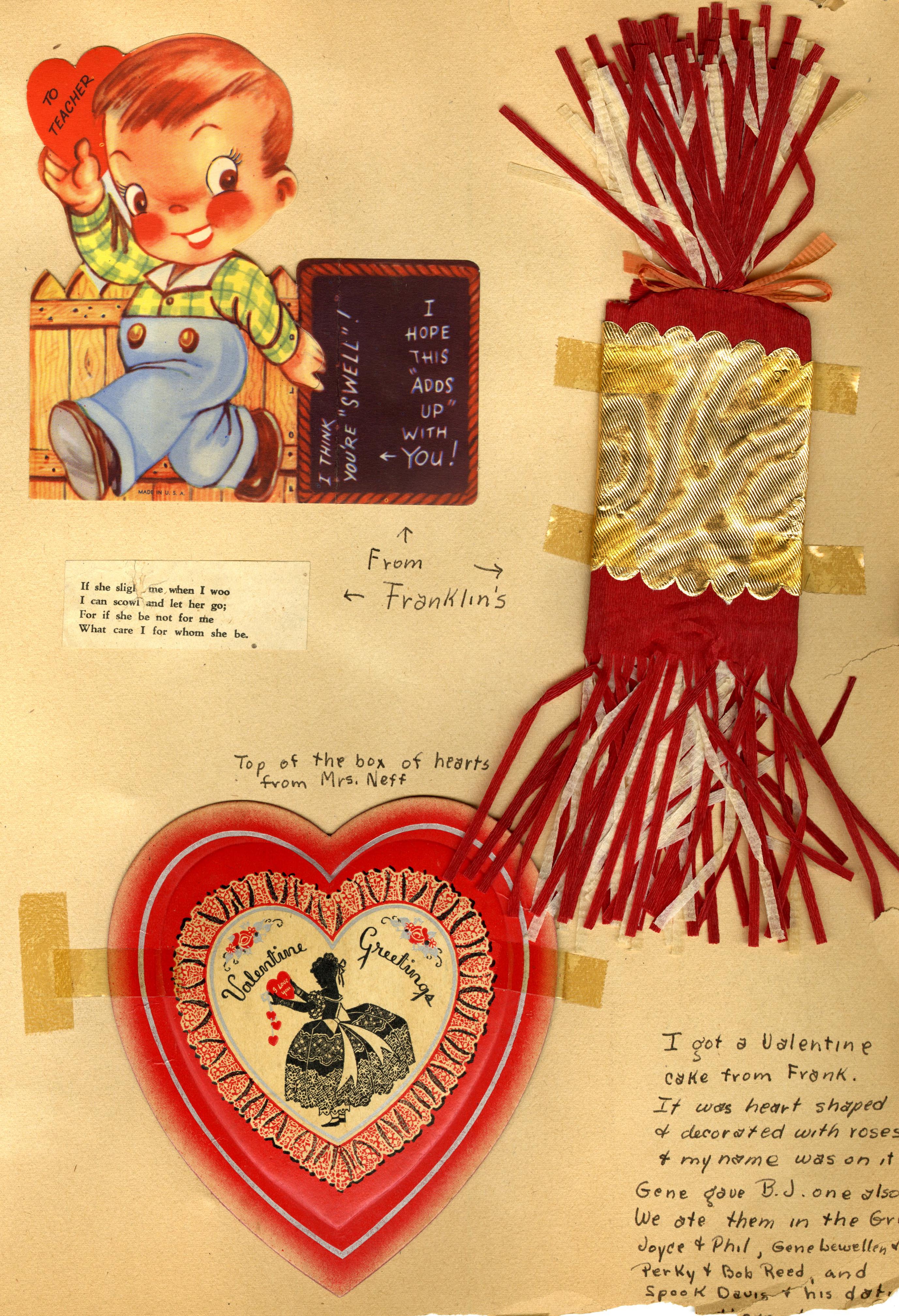 But more important were the personal glimpses that I got into the lives of IU students and faculty. The Archives contains many scrapbooks from students who documented the love and friendship they found here. One set of scrapbooks belonged to Doris Joan Richards Neff, who attended IU from 1945 to 1949. She put together a scrapbook for each year she was at IU, filled with mementos from dances, parties, and even impromptu taco dinners with friends. While a student, Joan met Franklin Neff, and the two married after graduation. Joan kept all kinds of things related to her romance with Frank, including parts of the gifts he gave her, dried roses she received for their anniversaries, and Valentines from Frank and his mother. 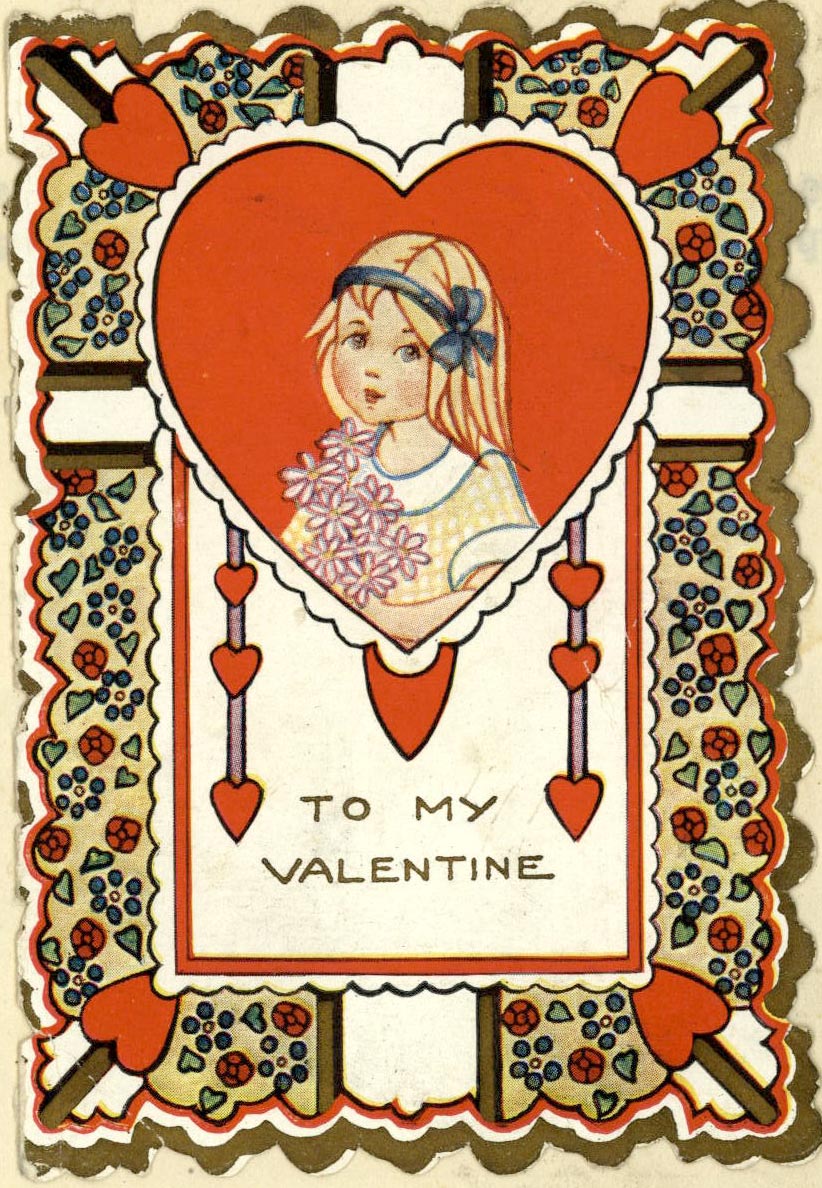 Believe it or not, students weren’t the only ones expressing their love at IU – apparently, faculty sometimes find love too! Perhaps my favorite examples are in the Cecilia Hennel Hendricks family papers and the Avis Tarrant Burke papers. All three Hennel sisters – Cecilia, Cora, and Edith – were students at IU in the 1900s, and all three taught on the faculty at various times. In 1913, Cecilia resigned as an instructor in the English Department in order to marry John Hendricks, and the two moved to Wyoming to run a bee farm. Being so far away didn’t stop Cecilia from keeping close ties with the rest of her family. The Hendricks family kept up a lively correspondence, and in a letter of February 17, 1914, Cecilia wrote that in one day, she received 11 letters, one card, and a package in the mail! The family papers are full of Valentines from daughter to mother, daughter to father, and from the whole family to their grandfather. In later life, when Cecilia returned to IU to teach in the English Department, she was so beloved by her students that some of them sent her Valentine cards and even flowers.

For sheer romance, though, you almost can’t beat the tenderness that existed between Avis Tarrant Burke and her husband, Robert E. Burke. Avis Tarrant married her old friend Robert in 1916 and moved to Bloomington to be with him. Robert was an assistant professor of Fine Arts, and Avis taught at the McCalla school and eventually worked at the University Extension Division. The two traveled together extensively, including to Europe, Hawaii, and the Pacific Northwest. Avis kept travel diaries that documented their adventures together, as well as personal diaries that documented less sensational “adventures.” For February 14, 1942, she wrote in her diary about two “events” for the day: Robert gave her a box of chocolates for Valentine’s Day and that she spent the morning cleaning out the closets!

Whenever the two were apart, they wrote very touching letters and poems to each other. One letter that Robert wrote to Avis reads, “Darling One: Perhaps this is silly to write to you when you are right downstairs now – but I want you to have this line from me just as soon as you get to Winsted [Connecticut] – all it says is that I love you more all the time and shall miss you very much. However, we’ll both keep very busy & so try to make the times pass quickly. xxxxxx Robert.” Avis wrote poems expressing how lonely she was walking down the streets of Chicago without Robert, as well as poems such as “To My Valentine of Twenty Years.” It seems like the love and affection that Avis and Robert had for each other never faded. 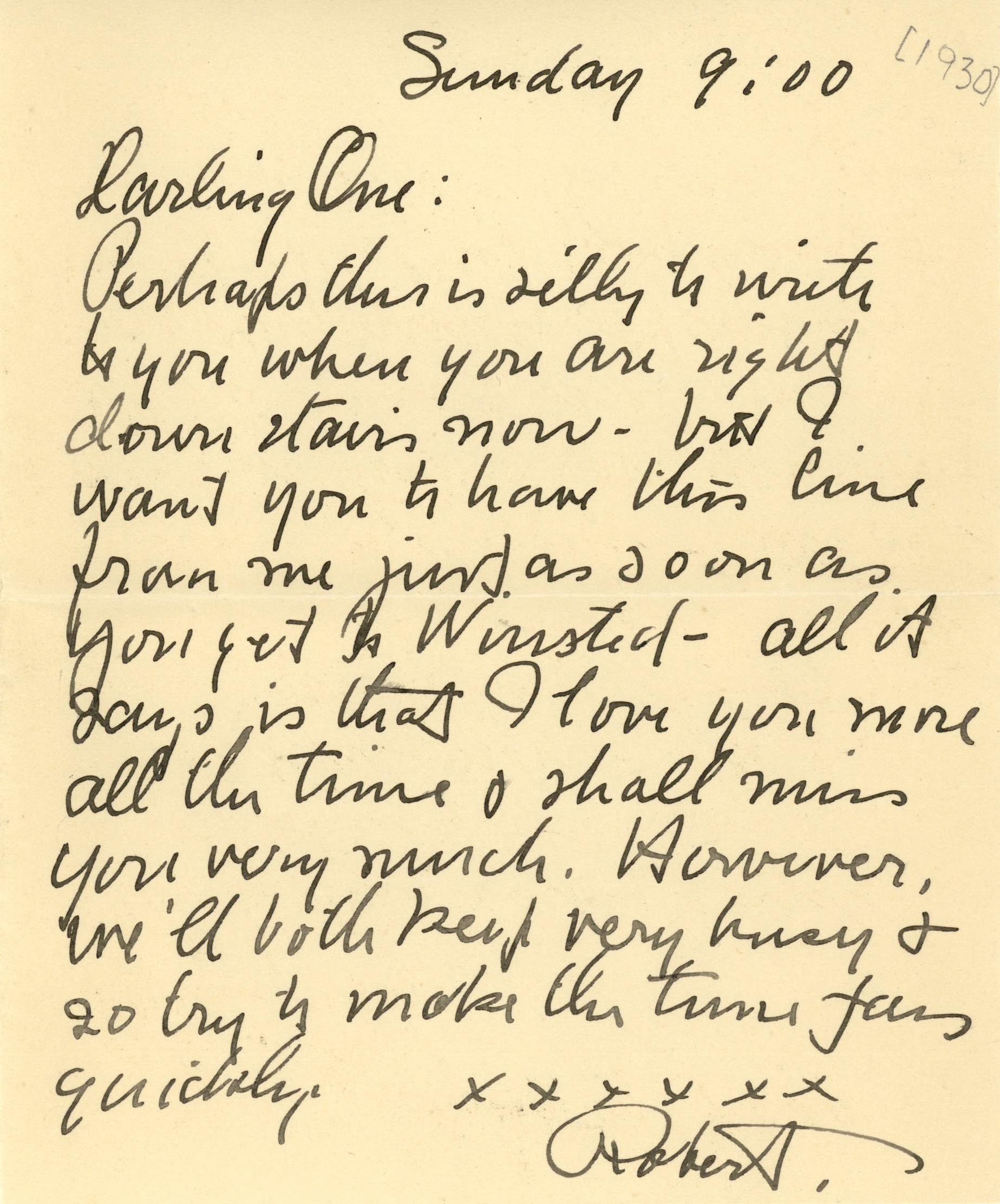 But perhaps the most touching example of unfading love that I saw was the drafts of a poem by Philip Appleman, a prolific writer and Distinguished Professor Emeritus of English. His papers include drafts of a poem he wrote for his wife Marjorie. Originally entitled “A Poem for Beautiful Breasts,” in later drafts the title of the poem changed to “Mastectomy.” Appleman seems to have written the poem while his wife was undergoing surgery. He imagines the procedure to himself, and then concludes the poem with the powerful lines, “I will love her more / than yesterday.”

Part of the beauty of a place like the IU Archives is that love never dies.