Readers recently got to experience the joys of Indiana University’s former Audio Visual Center (IUAVC) in Hannah Osborn’s post “Chucky Lou: The Story of a Woodchuck…and Captive Wildlife in Indiana.” I’m happy to report that as we process this collection at the archives, we continue to find plentiful moments of joy in the documents and materials that represent the IUAVC’s history. Not too long ago, Director Dina Kellams was perusing the collection to pull some material for an undergraduate class when she stumbled across a folder with the handwritten label: “Mister Rogers’ Neighborhood.” To celebrate a joyful new year and A Beautiful Day in the Neighborhood, which starred Tom Hanks as Fred Rogers and premiered November 22, let’s take a look at the relationship between the AVC and this beloved touchstone of educational television.

At first glance it might not be obvious why this folder exists in the IUAVC collection. It is comprised of news releases issued by National Educational Television (NET) from 1967-1969. The releases detail specific Mister Rogers’ programs as they were aired, including initial broadcast dates, program lengths, medium information, indications if the program was in color or black and white, and synopses. These synopses are admittedly pretty adorable and endearing in and of themselves:

“Program #41: What to do if you’re frightened? Misterogers explains that people can express their feelings in all sorts of ways. X the Owl spends the day making a rainbow from cardboard and doing scientific experiments. Henrietta Pussycat is upset by the thunder and lightning. Lady Aberlin suggests it is because the noise is unexpected. A game of “peek-a-boo” helps Henrietta; so does the explanation that lightning helps light up dark places. Misterogers turns the lights off and on to show that everything in the room is the same, even when it’s dark.” 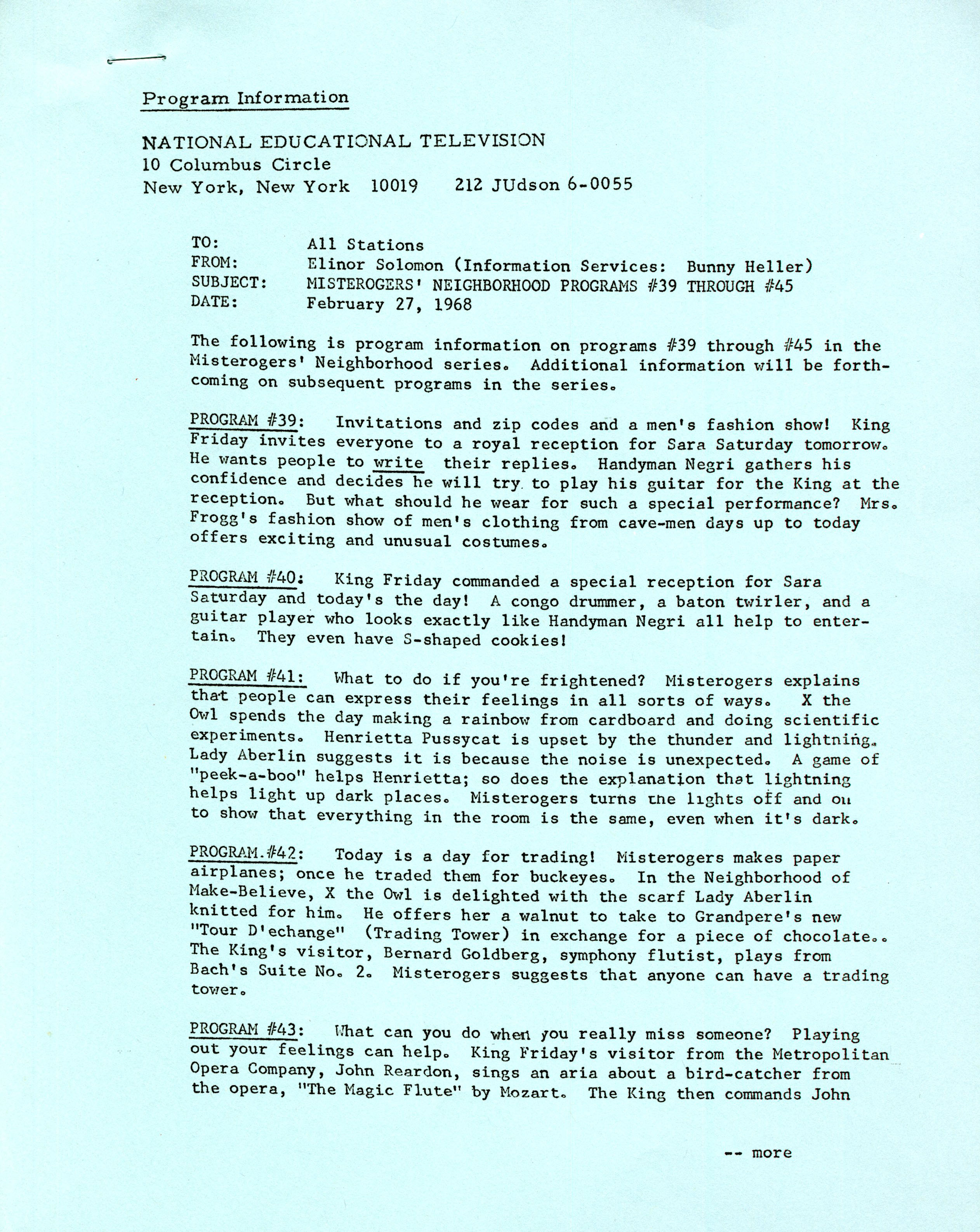 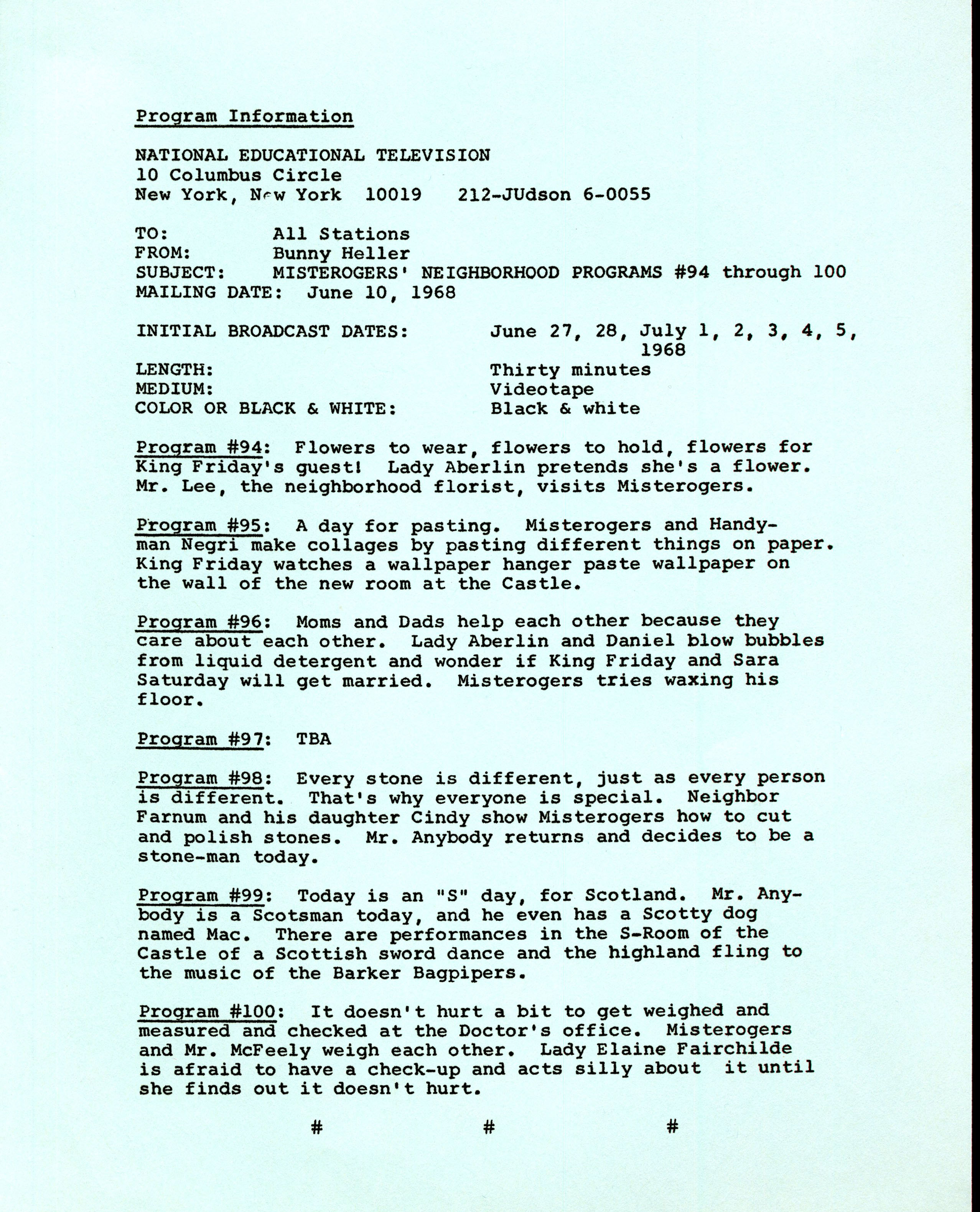 These descriptions give us a picture of the major themes, characters, and lessons we came to know and love in the Neighborhood of Make-Believe. The associated information, such as broadcast dates and other administrative data, give us some historical understanding of the show’s trajectory in the late 1960s. But why are these releases in a folder used by the AVC? A document nestled about halfway through the folder, titled “INDIVIDUAL PROGRAM DATA” from June 1, 1967, gives us some clues. The document includes a general description of Mister Rogers’ Neighborhood, biographies of Fred Rogers and other featured talent, and descriptions for the first 100 Mister Rogers’ programs. The document is created by “ETS Program Service, Bloomington, Indiana.” I wasn’t sure what ETS stood for (I ventured to guess “educational television service”), so I did a quick Google search for “ETS Program Service Bloomington Indiana 1967.” This isn’t always the case, but sometimes a well-phrased Google search can be an archivist’s friend. I immediately found the answer in a digitized copy of The Public Broadcasting Act of 1967. A section of the act included facts about educational television stations—or ETS. It detailed:

“The ETS Program Service was established in 1965 at Bloomington, Indiana. It is operated by Indiana University Foundation under contract to Educational Television Stations, NAEB. This service provides an exchange of a variety of programs selected from the best productions originating at local stations. There is a small per-program use charge to offset distribution costs. This nation-wide program distribution facility was made possible through grants for the National Home Library Foundation and the W.K. Kellogg Foundation.” 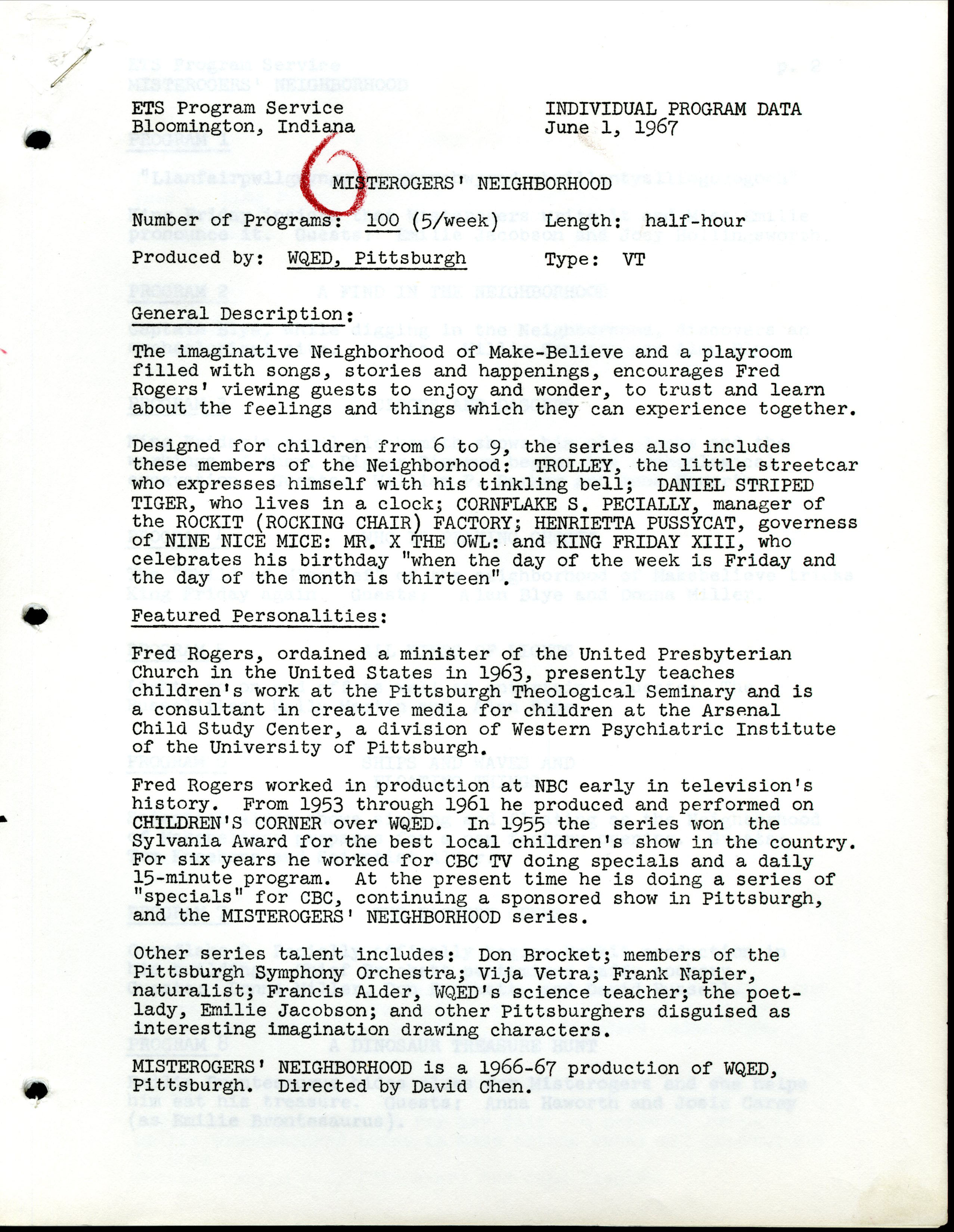 It is pretty cool to see IU’s educational television services represented in the congressional act that established the Corporation for Public Broadcasting (CPB) and set the path for establishing the Public Broadcasting Service (PBS) and National Public Radio (NPR). The Public Broadcasting Act also had a strong connection to Fred Rogers himself. Rogers was a key supporter of the act and, two years later in 1969, testified before the Senate to defend the CPB and public broadcasting as a whole. The footage of the testimony has become iconic, in part because it played a central role in the 2018 documentary Won’t You Be My Neighbor? Rogers’ testimony is celebrated as a meaningful moment in American public rhetoric, and featured goose bump-inducing quotes such as:

“This is what I give. I give an expression of care every day to each child, to help him realize that he is unique. I end the program by saying, “You’ve made this day a special day, by just your being you. There’s no person in the whole world like you, and I like you, just the way you are.” And I feel that if we in public television can only make it clear that feelings are mentionable and manageable, we will have done a great service for mental health.”

You can view the video of his testimony and read a transcript of it here!

Now that we know why the ETS Program Service would have a folder on Mister Rogers’ Neighborhood, we can better understand the multifarious functions of the IUAVC. IUAVC was originally called the Film Archives’ Educational Film Collection and was launched in the 1940’s through IU’s Extension Division. The center amassed tens of thousands of 16mm films, which it would rent out to schools, libraries, and educational groups for low fees. IUAVC became a leader in the field of instructional technology and media in the mid-twentieth century. It worked in tandem with the National Instructional Television Library (NIT), which was located and operated by the IU Foundation (NIT became an independent entity in 1968 and renamed itself the Agency for Instructional Technology—AIT—in 1984. Learn more about AIT at the IU Libraries Moving Image Archive!). The IUAVC was also the exclusive distributor of films produced by National Educational Television (NET), the predecessor to PBS. Going back to Mister Rogers’ Neighborhood, the first nationally broadcast season of the show was aired on NET in 1967. This means the IUAVC played a central role in the rise of Mister Rogers’ popularity in the late 1960s.

As we continue to process this exciting and important collection we’ll be sure to share more gems with you. In the meantime, you can get in touch with our friends at the IU Libraries Moving Image Archive to access IUAVC films and videos! And remember: You always make each day a special day. You know how: By just your being you!