Because the pandemic has many of us working at home, opportunities have presented themselves.  I joined the Archives’ Great Coronavirus Transcribe-a-thon, helping to transcribe the letters of Daniel Biddle, who attended IU from 1893 to 1895 and later became a seminal figure in the Indiana insurance business. His beautifully written letters and descriptions, along with his picture, have already been featured in an earlier blog about the “Removal Question.”

My task was to type his letters to Janie, his future wife. I jumped at the chance, because I thought there might be a bit of romance in them.  However, they are mostly prim and proper as one would expect from the late 1800s.  He describes classes, fires, his roommates, visiting lecturers, and the famous IU Scrap between the Freshman and Sophomore classes, of which he seems wary.  Yet, just as flirting in elementary school includes contrary behavior, Dan begins to tease Janie his second year.  He explains that her high school chemistry is “baby chemistry” for which he then has to apologize for:

I most humbly beg your pardon for “making so much fun” of your school affairs. I may be mistaken, but I think I have always praised them very highly. Of course I have not spoken of them in such glowing terms as I use in speaking of affairs here, but it is only just that I should not. 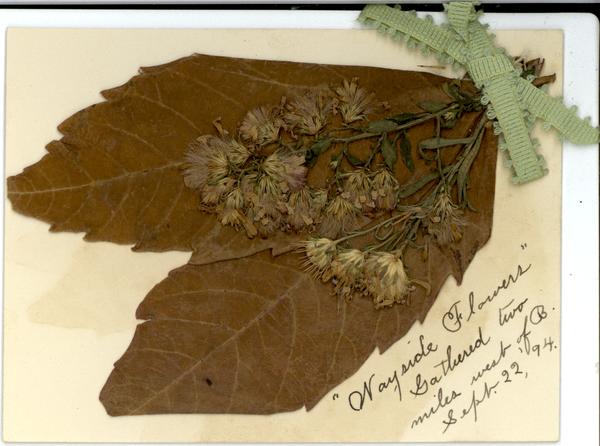 Also, he starts inserting tidbits about his familiarity with young ladies:  “By the way there is a pretty nice looking girl here where we room but have not yet succeeded in getting acquainted with her. Guess she is afraid of us. Girls are generally afraid of the boys you know.”

But Dan is an equal opportunity flirt and gives Janie the reins several times with inducements such as: 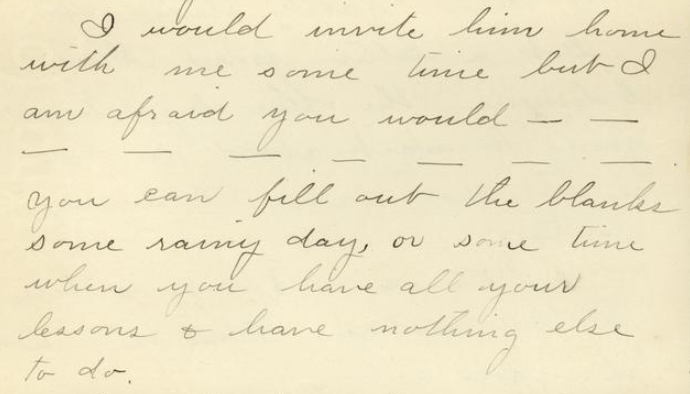 Blanks become a frequently used strategy in the letters, though they never get filled in. Dan suggests the words that populate the blanks be shared in person.

There are further discussions on the role of women and men. Obviously replying to something Janie has pointed out, Dan responds:

I did not mean to say that all boys only care to have one girl. I was just stating the rule. Of course it has exceptions, but they are rare. Eli only has three or four girls I think. Yes, ‘boys are altogether lonely creatures.’ You surely hit the nail on the head that time. It’s a good thing to be able to know the truth when one sees it.

Later, he asserts women come to college to find someone to marry.  At times, it feels as if he is baiting Janie!

The culmination of their flirtation can be summed up in one hyphenated word: trade-lasts. On November 5, 1894 Dan writes, “So you have a trade–last for me have you, well I have one for you too. Now, as Tom Sawyer says its a ‘sure enough’ trade–last too, not one manufactured for the occasion as some I have heard of.”

When I first read it, I thought perhaps he had a trade magazine for her, but then the term came up again at the letter’s end: “If you wish to trade trade-lasts, box yours up and send it, and I will send mine in return guarenteeing [guaranteeing] it to be of good quality.” 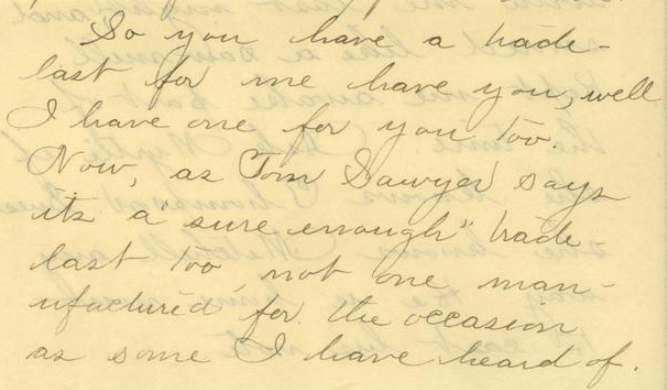 I hit the Internet to discover a trade-last was an exchange of compliments according to the Oxford English Dictionary. In John F. Clark’s article about trade-lasts in American Speech I found out they were a “purely American phenomenon,” shared by young people from the 1890s to the 1930s, and have been documented linguistically throughout the Midwest.[1]

Not being an expert on relationships now or in the 19th century, I do not pretend to know the psychology between Dan and Janie, but it appears that the flirting and the baiting and the blanks get to be a little too much. Dan apologizes more:

I believe I did not say what you said [“implied” above first “said”] I said, but think I said that I said what I meant and meant what I said in the case in question; at least I say now that I do not always say what I mean or mean what I say. Beg your pardon for the first of this statement.

Well now for that marveless [marvelous] letter you spoke of, which, it seems, you unfortunately misunderstood. I thought you understood that my reckless remarks were only in fun, and am sorry to learn you thought them otherwise. I am aware of the truth of your statement that ones thoughts look funny on paper. Words are poor dumb things when written and sometimes express in a feeble way what is intended, and in a powerful way that which was not intended. In conversation the manner in which a thing is said & the expression of the face often mean more than the spoken words. I possibly did not bear this in mind when writing my last letter, and hence passed over the danger line without realizing it. I however beg your pardon for the past, and promise to be more careful in the future.

Dan seems to be adept at tongue and cheek. By winter break, Janie has a “bone to pick with him.” Afterwards, it is clear one of Dan’s friends has shared something unsettling with her. As the reader of the letters, we never truly find out, but Dan and Janie gingerly begin to talk of trade-lasts again.

Amidst the sharing of Latin, James Whitcomb Riley phrases, book recommendations, and hometown gossip, the two navigate their growing closer.  By the end of Dan’s last year, there is a hesitation between them, a backing away from the flirtation and, perhaps, a maturity.  In his last letter to her, Dan shares, “Yes, I think I have noticed somewhat of a change in you. I am better acquainted with you now than before…”

It is an intimate privilege to read someone else’s letters to their future spouse. I had to remind myself that even though these were Dan’s words, it was Janie who kept the letters in the first place. I knew from the biographical information on the finding aid that Janie died before Dan. Having had two sons and hopefully of fulfilling life, she died of diphtheria at age 51.[2]  After Janie’s initial keeping the letters safe, it was Dan and their family who kept them and eventually gave them to the Archives. Quite a loving gesture for quite a budding love affair.

All of the letters have been digitized and are available through the finding aid. The transcriptions are not publicly available yet, so just reach out to the Archives if you would like access!