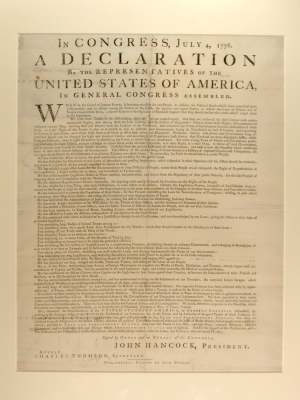 The Friends of the Lilly Library are sponsoring the following lecture this Monday:

Patriotic prints containing the text of the Declaration and facsimile signatures of the Founding Fathers first appeared in 1818. Although advertised as absolutely accurate reproductions, they did not replicate the text so much as celebrate its achievements as a vindication of human rights, a charter of freedom, and the birthright of the nation. Leading artists and engravers embellished them with ornamental lettering, portraits of presidents, and elaborate allegories of peace and prosperity. One of the more fanciful and partisan interpretations prompted the Department of State to commission the first real facsimile, which, ironically, may have played a role in damaging the original, now badly faded and barely legible. In this slide lecture John Bidwell will recount the fate of the original and will show how facsimiles have influenced the way it has been read and revered.

John Bidwell is Astor Curator of Printed Books and Bindings at the Pierpont Morgan Library, before which he was Curator of Graphic Arts in the Princeton University Library. He has written extensively on the history of papermaking in England and America.