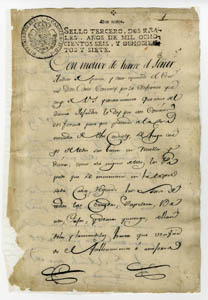 One of the many services the Lilly Library provides for researchers is that of “digitization on demand.” A recent successful and much appreciated example of this service was the digitization of the “Testamentaria,” a manuscript from the Lilly Philippine mss. II Collection.

The ‘testamentaria’ of Charles Connelly, an Irishman from Crosswell (near Glinsk in County Galway), contains much information on financial communications between Ireland, Spain and the Philippines. In the late eighteenth century, Connelly served in Mexico and the Philippines, where he participated in the Sociedad Económica del País by planting cash crops in an effort to increase the Spanish Crown’s profits. Connelly’s estate was being settled at the height of the Spanish Enlightenment. The communications include several mentions of Fr. Thomas Connelly and Fr. Thomas Higgins, co-authors of the monumental Diccionario nuevo de las dos lenguas espanõla é inglesa (1797-1798) as well as transactions carried out through the merchant banking house of Patricio Joyes e Hijos. In addition, the document contains a copy of a letter from Charles Connelly’s family members in Ireland certified by Leandro Fernández de Moratín, which made its way into the record in Manila.

Other scholars, when notified by Dr. Bergman about the completed project, agreed that “it sounds like an incredibly rich source, particularly for people working within our network of scholars on Ireland and the Spanish and Spanish American world.”

In addition, Professor Bergman provided us with links to other organizations and researchers working in this area of studies who would find the manuscript a valuable resource: