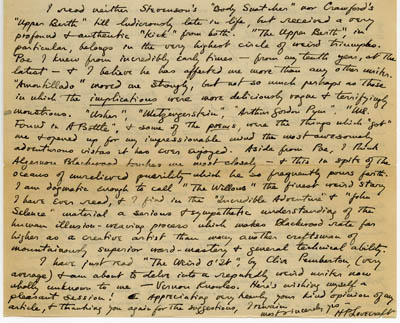 In an April 15, 1927 letter to Vincent Starrett, fellow horror fiction writer Frank Belknap Long, Jr. recommended the work of an author largely unknown outside the insular world of pulp magazines like Weird Tales. “Howard Lovecraft says (writes) that he has sent you several tales,” wrote Long. “His best stories are really immense! Not in Poe, Bierce, or M.R. James have I found such an abundance of sheer spiritual horror. He writes of great bat-winged things from outer space that brood over this and other worlds–he doesn’t secure his astounding effects by applying the conventional pinch of salt to open wounds. His methods are restrained and genuine. He works up his unhallowed atmosphere slowly until his prose fairly glitters with the light that never was – witch-fires glow on every page…”

Although H.P. Lovecraft (1890–1937) had only one book (The Shadow Over Innsmouth, 1936) published in his lifetime, the Providence, Rhode Island born author of weird fiction doggedly submitted his work to various publishers and suffered numerous rejections. In a series of five letters written in 1927–1928 to Starrett, an occasional writer of weird tales destined to be best remembered as a noted Sherlock Holmes scholar, Lovecraft candidly discussed his “sadly uneven” fiction and noted his chief literary influences (see image 1 – Dec. 6, 1927). A prodigious correspondent with other writers in the genre and its fans, Lovecraft was saved from literary obscurity by August Derleth (1909–1971), a precocious teenager when he first began corresponding with the author in the mid-1920s. Soon after Lovecraft’s untimely death in 1937, Derleth with friend Donald Wandrei (1908–1987) founded Arkham House in Sauk City, Wisconsin to collect and publish his writings. The publisher’s initial offering, The Outsider and Others (1939), was limited to 1200 copies and sold poorly. Today, the book is highly prized by collectors as are all Arkham House editions of Lovecraft’s work. The Lilly Library holds many Arkham House first editions including those pictured: Beyond the Wall of Sleep (1943), The Dunwich Horror and Others (1963), and Dagon and Other Macabre Tales (1965).

In addition to numerous monographs by and about Lovecraft accessible through IUCAT, the Lilly Library is home to manuscript collections of interest to the study of the writer Stephen King has identified as “the twentieth century’s greatest practitioner of the classic horror tale.” The Starrett mss. contains the above cited correspondence while the Derleth mss. II features the Wisconsin writer’s thoughts on Arkham House. The Mosig mss., the letters and papers of academic Dirk Walter Mosig, chronicle his editorship of the Lovecraftian review, The Miskatonic, and features detailed correspondence with two of Lovecraft’s biographers, L. Sprague de Camp (Lovecraft: A Biography, 1975) and the aforementioned Frank Belknap Long, Jr. (Howard Phillips Lovecraft: Dreamer on the Nightside, 1975).