The Lilly Library was very pleased to be asked to contribute material to the current exhibition on display at the Morgan Library & Museum in New York City, The Little Prince: A New York Story, the first exhibition to explore in depth the creative choices made by Antoine de Saint-Exupéry while writing the manuscript during two years he and his wife spent in New York City at the height of the Second World War. Curated by Christine Nelson, curator of literary and historical manuscripts, the exhibition explores the origins of the story as well as features many of the original art works, including watercolors and drawings made by Saint- Exupéry for the book.

From the its extensive Welles manuscript collections, the Lilly Library contributed Orson Welles’s typescript, with autograph revisions, of a screen play for a film version of Antoine de Saint-Exupéry’s The Little Prince, ca. 1943. According to Barbara Leaming in Orson Welles: A Biography, following the tumultuous productions of Citizen Kane and The Magnificent Ambersons, Welles discovered the work while searching for his “third film that, unlike its two predecessors, would interest a mass audience.” She quotes Welles as remarking that “what I wanted to do with The Little Prince, was a very small amount of animation. It was only the trick effects of getting from planet to planet.” Walt Disney and his crack team of animators were the obvious collaborators of choice. While introductions and a lunch meeting were arranged between Welles and Walt Disney, Welles later reported to Leaming that after arranging to be called from the initial meeting at the Disney Studios, Walt Disney exploded in the hallway outside of the room, “there is not room on this lot for two geniuses,” and the project came to an end. 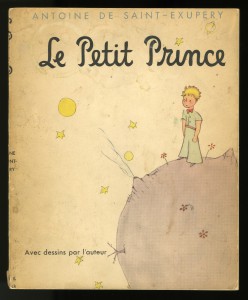 The Little Prince: A New York Story at the Morgan Library & Museum
http://www.themorgan.org/exhibitions/exhibition.asp?id=90