To celebrate Halloween, we’ll be counting down thirteen of the weirdest, creepiest, and most unusual items found in the depths of the Lilly Library’s collections. Among the most beautiful and hallowed books treasured by collectors throughout generations, we’ve accumulated some objects that also excite the dark side of our imagination… and what better time to revel in the dark, strange, and fantastic than Halloween? We’ll be posting all thirteen here on our blog, but you can also follow us on Twitter @IULillyLibrary to see more images of these spooky treasures. 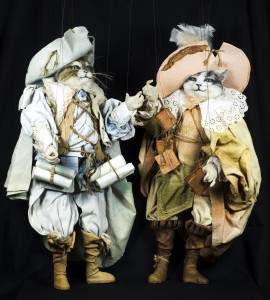 Sometimes there’s a fine line between cute and creepy—a very fine line. These cat marionettes are charming, whimsical—even downright adorable (just look at those cute kitty faces!). But over the years at the Lilly Library, they have frightened more than one staff member. What seems to unnerve people in particular are their hands—their white porcelain human hands. We’ve seen many a face move from “awwww!” to “ahhhh!” as the eyes drop from the figures’ faces to their hands. It’s the juxtaposition of the realistic human hands and bodies with the cat faces that creates an uncanny effect (and the many horror movies about dolls that come to life and kill people don’t help either!). Despite their creepy vibe (or perhaps partially because of it) these cat marionettes are a great favorite among the Lilly Library staff. They were purchased in Europe by former Library Director Bill Cagle because of the objects they hold in their hands—books for one cat and manuscripts for the other—representing the major parts of the Lilly Library’s collections. Originally intended as decorations (and hanging for many years in the Curator of Manuscript’s office), they have since become part of the collections. Current staff members have affectionately named them Becky and Saundra after two of the Lilly Library’s greatest librarians of the past.

The stereotypical view of America in the 1950s comes straight out of Leave it to Beaver. But can you imagine Wally and the Beav reading these comic books?! Believe it or not, these were among the most popular and successful comic books of the early 1950s. When William Gaines (later famed as the founder of Mad magazine) inherited “Educational Comics” from his father in 1947, he changed “EC” to “Entertaining Comics” and began publishing the type of comics that soldiers who had become hooked on comic books during WWII wanted to read—crime, suspense, horror, westerns, and science fiction. EC published such notorious titles as Tales from the Crypt, Vault of Horror, Crime SuspenStories, Shock SuspenStories, Two-Fisted Tales, Weird Science, and Weird Fantasy. Many of these comics were sexually suggestive, graphically violent, gruesome, and gory. They also tackled contemporary issues such as racism and drug use. They usually had their own bizarre morality as well—after a rousing bloodbath, the criminal elements were usually dispatched in an equally gruesome way, showing that “crime does not pay.” These comics were popular with adults and children; the latter audience caused a moral panic that eventually went all the way to the United States Congress. Psychiatrist Frederick Wertham published Seduction of the Innocent in 1954, a book that claimed that these type of comic books were the direct cause of juvenile delinquency; he also famously claimed that Batman was “obviously” gay and that Wonder Woman was far too strong to be a “natural” woman. The ensuing public outrage caused a Congressional inquiry into comic books in which publishers such as William Gaines were asked to defend themselves.  No laws against comics were passed, but instead the comics industry chose to censor itself.  They created the Comics Code Authority in 1954 which “certified” comics as being reasonably wholesome.  William Gaines, publisher of EC, refused to join, leading to the company’s ultimate demise, as distributers would not carry non-Code comics.  The “Code” banned the words “horror,” “terror,” and “weird” from covers.  Even though these comics were killed by censorship, their influence is enormous.  Writers such as Stephen King and directors including George Romero and Steven Spielberg read these comics as children, and their colorful, cinematic, and at times almost gleeful violence had an impact on their own work. 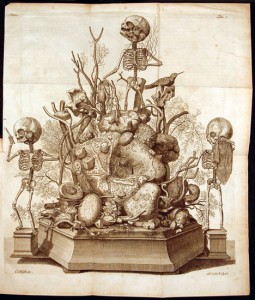 This engraving is found in Dutch anatomist Frederick Ruysch’s Thesaurs Anatomicus. Ruysch was a professor of anatomy at Leyden and Amsterdam, notable for his developments in anatomical preservation. The engravings in this volume are exquisitely whimsical and delicate. Infant skeletons are posed in quaint attitudes—playing a violin or weeping into a tissue—surrounded by human organs arranged in landscapes that resemble deep sea flora. Although they do not serve an educational or anatomical purpose, these fold-out engravings are not only spooky but stunningly beautiful.

Stay tuned the #1 Spooky Treasure in our countdown on October 30 and be sure to follow us on Twitter @IULillyLibrary to see more images of these spooktacular items.

Education and Outreach Librarian / The Vault-Keeper