The Lilly library has a wonderful collection of folklore field notes taken by Richard Dorson (the “father of folklore” who was a professor at IU from 1957 to 1981), his students and colleagues.  They range from ghost stories and drinking songs to wince-inducing jokes based on long-gone stereotypes. 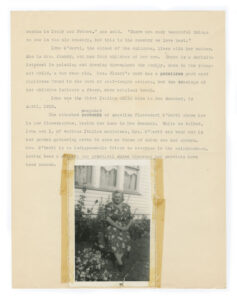 Delving into the collection as part of my PhD research on immigration history, I came across an intriguing list of folk remedies recounted by a first-generation Italian immigrant named Angelina Flaccadori O’Berti.  Born in Bergamo, in Northern Italy, Mrs. O’Berti came to the United States at age 27 in around 1908.  Although not trained in medicine, she was “an indispensable friend to everyone in the neighborhood” because of her skills in midwifery and practical nursing.   Moreover, the field notes, taken by researcher Aili Johnson, comment that Mrs. O’Berti was “a gifted teller of tales.”   During the interview, Mrs. O’Berti went into her garden and collected some of the herbs needed for the cures – malva, bitter grass and tansy – which 70 years later are still taped to the page.

Here are some of Mrs. O’Berti’s suggested remedies (these are not endorsed by the Lilly Library!): 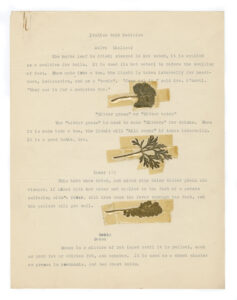 Katherine Reed is a History PhD student from the University of Manchester taking part in the John Rylands Research Institute/Lilly Library Doctoral Research and Training Programme. Read more about the exchange program here.