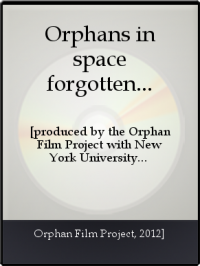 The IUB Libraries Media Services, Life Sciences, and the William & Gayle Cook Music Library invite you to attend Orphans in Space: Forgotten Films from the Final Frontier. Join us on October 28, 5:30pm-9:00pm, Hazelbaker Lecture Hall, Room E159 in the Herman B Wells Library for an exciting evening of space exploration. What is an orphan film? An orphan film is generally a film that has been abandoned by its filmmaker, or production company. Originally born in 1999 at the University of South Carolina, the Orphan Film Symposium moved to New York University in 2006, and has since spread its global wings to include a symposium held here at Indiana University in 2013.

The Orphan Film Symposium exists to gather “scholars, archivists, media artists, curators, preservationists, librarians, collectors, distributors, documentarians, students, researchers, musicians, and others to saving, studying, and screening all manner of neglected moving image artifacts.” And just like watching an Ed Wood movie, we think you will have a blast viewing these forgotten low-budget science, and science-fiction films which include visually artistic and creative stock footage.

Houston, We Have Ignition!