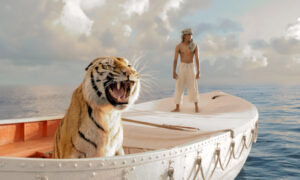 The 2012 heartwarming film takes place on a shipwreck that was en route to Canada from India. A young boy, Pi, lost his entire family on that one night. They were transporting a zoo which only left one animal survivor; A Tiger (Bengal). The story goes on as an uplifting triumph of man and animal learning to trust one another, lost at sea, in order to survive. What I took away from the film was that mankind must learn to live with animals instead of treating them as worthless. Their sole purpose of wanting to survive is in conjunction with us humans.

Not only does this movie portray unity with animals, it also shows that teamwork is a vital key to living. Without working together to achieve a certain goal, it has a higher percentage of failing. As I have heard in a famous quote; “United we stand, divided we fall.” Later in the film when the tiger fell ill, Pi took it upon his hands to try and help the tiger. They had developed an unspoken bond that captivated the audiences attention.

This movie is indeed a great watch, rather long, but nonetheless a family movie that teaches valuable lessons.