Throughout history, college students have been prone to griping and airing their grievances with their school’s faculty and administration. Today these grievances are shared through Facebook statuses, Tweets, and ratings on Rate My Professor. However in 1875, the Indiana University students found another way to express their opinions: a little publication they ominously called The Dagger. The Dagger was started in 1875 by members of IU’s Beta Theta Pi fraternity and continued into 1880. Published at Commencement by the seniors of the fraternity, the timing allowed their fellow students, visitors, and the administrators know what problems existed within the walls of the University. The slogan of the annual publication was “Let Truth Shine!” and the seniors had no qualms with letting the motto ring true.

Notable in the publications and valuable to researchers today is the Faculty Review, which includes Indiana University names of distinction such as Daniel Kirkwood, Theophilus A. Wylie, and Elisha Ballantine; all of whom received glowing reviews from the Dagger’s staff members. The students note the good and bad in each instructor and save some cutting remarks for IU’s first female student turned instructor, Sarah Parke Morrison, by declaring: “If she had any reputation we ask in the name of God, upon what is it based, if accompanied by any reliable recommendation, in the name of heaven how was it obtained?” Even the librarian is not sacred to the writers. In the June 1880 issue they depict the book buying trips of librarian William Spangler as a great blight on the expenses of the students’ tuitions. The writers proclaim: “It’s high-handed robbery from the students to pay this ornery faculty pimp’s way through college and to Europe and back.” 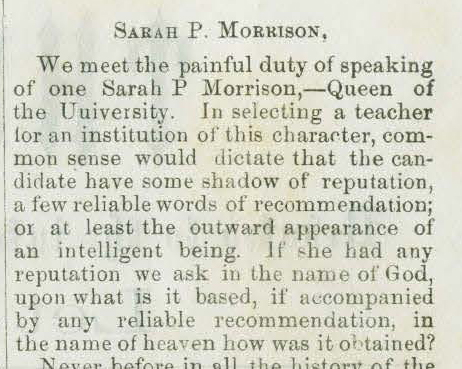 Sarah Parke Morrison was none too popular with IU students.

The Miscellany section of the newsletter is a hot bed of jeers, insights, and amusing limericks. This section was produced by the alumnae and looked to allow for some social reporting aside from the grievances of the university. Many times individuals were mentioned by name but some references were anonymous. A perfect example of this lies in this musing from the June 1875 edition: “One of the senior girls has a better mustache over her eyes than any one of the boys has under his nose.” This section was a perfect outlet for social reporting and anonymous name calling that denoted the reputation of the newsletter. It also allowed for the fraternity to establish a pecking order of rivals.

If you would like to get a glimpse in real life of the scandalous newsletters, the three issues in our collection have been fully digitized and are available via the finding aid at http://purl.dlib.indiana.edu/iudl/findingaids/archives/InU-Ar-VAD4412!