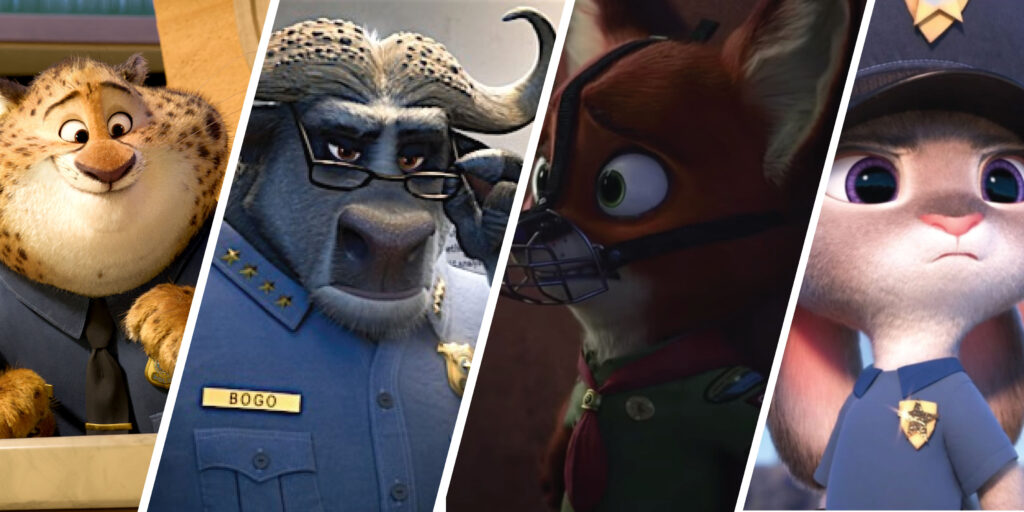 When many people think of Disney movies, their minds might go towards the token Princess movies, maybe the classics such as The Jungle Book and The Lion King, or perhaps the many wonderful Disney/Pixar collaborations. Just last year, however, Disney brought us a film that not only rivals the quality of the classics with the same heartwarming story and lovable characters but also goes to infinity and beyond in just about every way that we expect from their live-action films as well. Because of that, Zootopia is not just a kid’s film, but a family film that every viewer can enjoy and relate to; this one improves upon that notion by allowing kids to have fun while provoking adults to think more so than most other animated films will warrant. In my opinion, this film is a great example of how movies can balance not only just a relevant and relatable narrative but also subtle and smart comedy that allows the story to thrive as what it’s meant to be at heart: fun!… 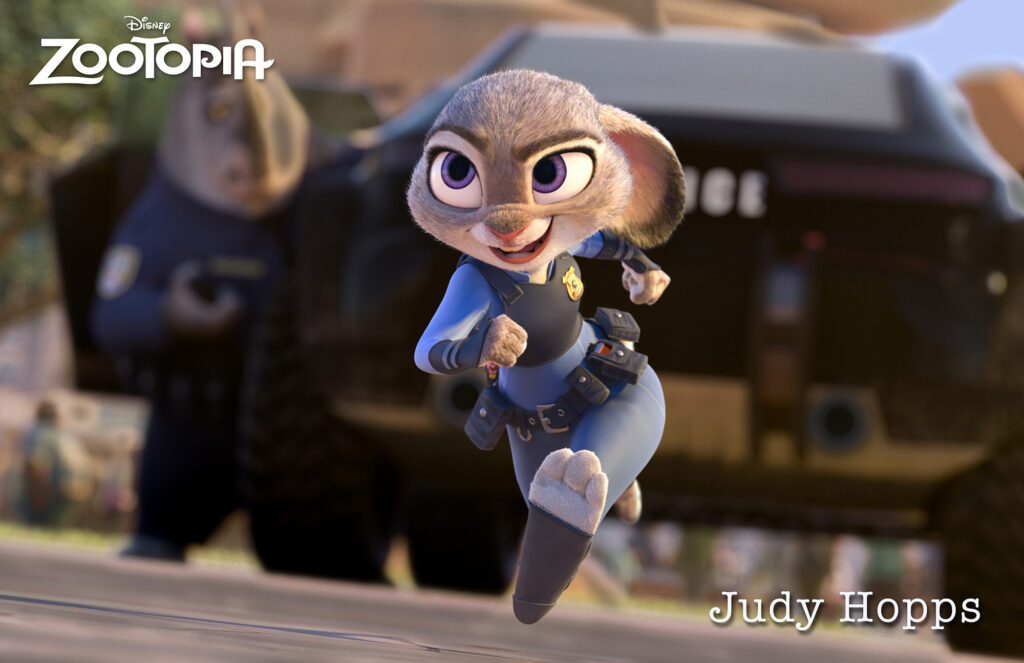 Our main character in the film, Judy Hopps, has just become an underdog police officer in the city of “evolved” animals called “Zootopia.” The word “evolved” is used multiple times throughout the movie to describe the inhabitants of this reality because after some time, in their society, the groups of the predator and the prey have learned to coexist in a somewhat peaceful nature, but tensions rise throughout the film and we see that their society is at a tipping point between the two. Judy, being an overachieving rabbit, is actually the first bunny-cop to ever be on

the force, and is looked down on and not taken very seriously by her peers and captain because of the kind of animal she is. She is one example in the film of “prey” trying to achieve just as much success as “predators” who typically have the more powerful positions in the city.

[Spoiler Warning Here…] With the help of a con-artist fox, Nick Wilde, Hopps uncovers that someone has been forcing predators to revert to their basic animal instincts in order to make the public 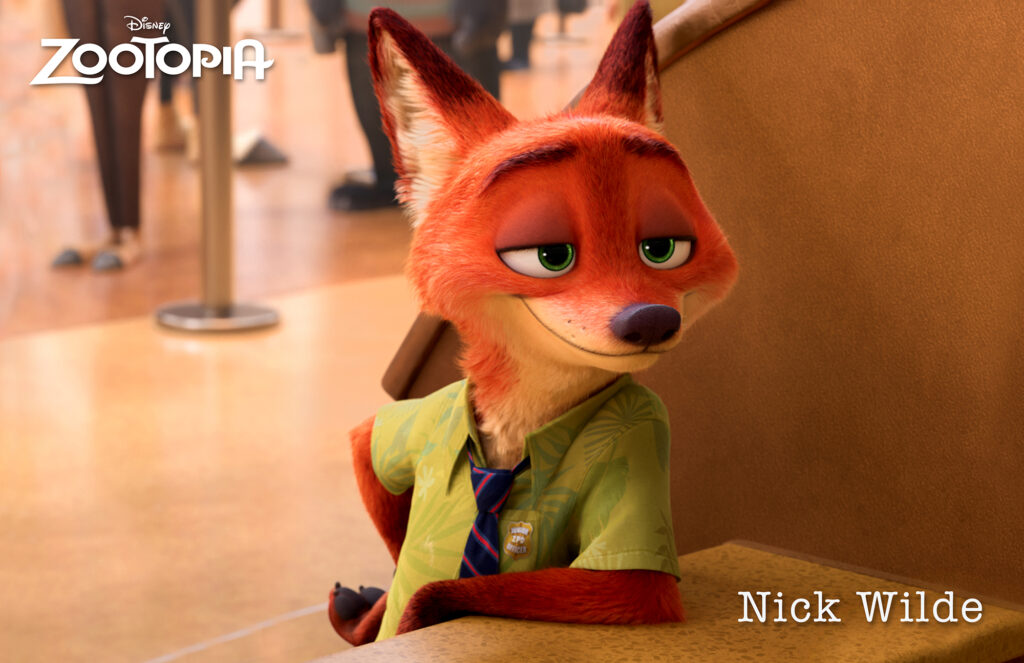 believe that predators are becoming a danger to society. Because of this theme and the plot of the film, the story is very timely and has the potential to appeal to everybody, not just the predominant demographic. As one may expect, messages and themes such as “try everything” and “follow your dreams” are explored, but the more meaningful themes are in the social commentary on the subjects of stereotyping, discrimination, and implicit biases.

The first, and less extreme, example of these in the film would obviously be how everyone treats Judy from the very beginning. When her parents learn early on that Judy wants to be a cop, they even tell her as a child that 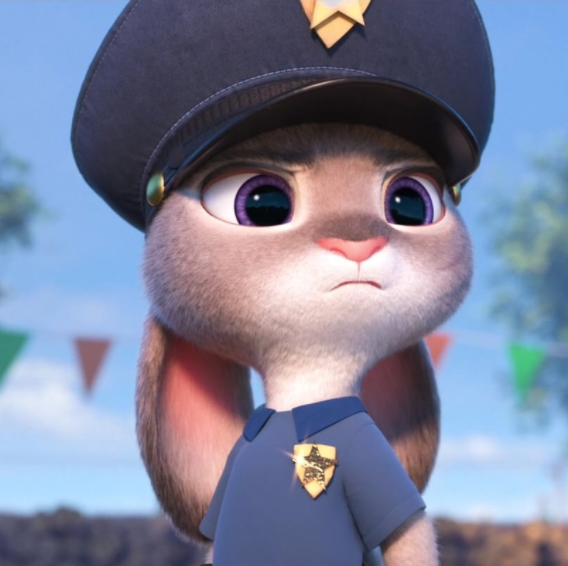 it is fine to have dreams as long as you don’t believe in them too much. Of course, Judy takes this as a challenge to become the best possible version of herself, and to achieve at everything that she sets her mind to. Regardless, she is called a “dumb bunny” when training to become a police officer, and her first day on the job with other new recruits, her chief puts her on parking duty instead of on a crime case as she expected or hoped. When she confronts him, reminding him that she graduated top of her class, he bluntly replies that he does not care. The predators don’t take the prey seriously, even when they prove that they can be just as good, or better, at anything.

The next example would have to be how their world views predators: Nick was constantly labeled as sly and untrustworthy just because of his looks instead of his actions. Judy’s parents even bought her “fox repellent” as a going away present, which Nick did not fail to notice. In a flashback

sequence, we see Nick joining the Junior Ranger Scouts as a child, but he is bullied and held down to the ground with a muzzle forced over his mouth. The other kids in the scene taunt him, saying “You thought we would ever trust a fox without a muzzle?” 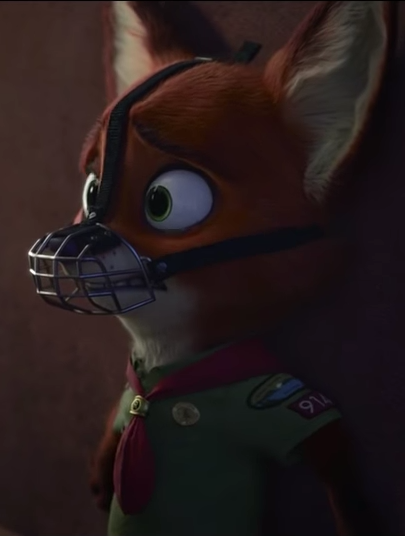 It is a very heart-wrenching scene as young Nick just keeps asking them, “What did I do wrong?” The fact that he had actually done nothing wrong other than being being born a fox is the brutal commentary on prejudice and stereotypes in the scene, and it’s so emotionally impactful because of it.

The aforementioned scene is one of the driving factors of what this movie is really trying to communicate. Whether people want to or not, they do have implicit biases; biases that work more on a subconscious level that have the potential to effect our actual behavior. In the film, after some of the predators

start to go “wild” in their behavior, the society as a whole was quick to turn on all the predators in the city. For example, a friendly and loving leopard that worked at the front desk in the police station was moved to the basement because they thought a predator “shouldn’t be the first face you see when you walk into the ZPD.” At the time, no one knows what is going on with these predators, and all the inhabitants of the city of the give into their fear, thinking that predators are evil at heart and simply cannot be trusted.

I think that this movie genuinely has good message pertaining to tolerating people different than you. It goes about conveying this in a way that doesn’t seem too preachy, but the message is still apparent and persuasive. Audience members of all ages can watch this and learn the importance of looking beyond any stereotypes; stereotypes don’t define anybody, and a person can always work to break away from the mold that society might try to put them in. Whether you’re a small bunny or a sly fox on the outside, it doesn’t mean that you shouldn’t be able to become whatever you want to be, and you should never let society try to tell you what you aren’t able to do just because of how you look. And of course, it wouldn’t be Disney unless you walk away from the movie knowing: “All our Dreams can come true, if we have the courage to pursue them.” Thanks for reading, and come check out Zootopia, and many other great Disney films from Media Services!