Greetings from DUX, where big changes have been afoot! (Or at hand… pick your extremity of choice. “Extremity” is going to be a theme we come back to in this post, so stay tuned.)

We’d like to take this opportunity to welcome our new department head, Jaci Wilkinson. Jaci (pronounced like “Jackie”) comes to us from the University of Montana, where she was the Web Services Librarian. Prior to her time in Missoula, she held a visiting position at her undergrad alma mater, Luther College in Decorah, Iowa. Jaci received her MLS from UNC-Chapel Hill in 2015. You may also have spotted her name in the Journal of Web Librarianship, where she serves as a book reviewer, or as a regular contributor to the LITA blog. And her latest publication is “Accessible, Dynamic Content Using Instagram,” which appeared in Information Technology & Libraries.

I spoke with Jaci about her move to Bloomington, and although we don’t have the mountains and wide open spaces of Montana, it’s pretty clear that she’s already discovering we have a lot to offer here in Indiana! She arrived in Bloomington about a month before her start date here in the Libraries, so she’s had some time to explore, and she’s made great use of that opportunity.

When I asked Jaci about her favorite thing about Bloomington so far, her face lit up and she exclaimed, “The food FOR SURE!” She’s been delighted to discover our many restaurants offering excellent Korean, Indian, sushi, and other multi-cultural cuisines, as well as the winter Farmer’s Market . As a practicing musician herself (she is a cellist), she’s also dived quickly into Bloomington’s music scene and has already attended several concerts. She is particularly impressed with the Bach Cantata Project, where they will perform a cantata, then present a lecture about that piece, and then perform the cantata again – allowing the audience to re-experience the piece armed with new knowledge about it. She’s also already attended film screenings at the IU Cinema as well as in the Libraries’ own Screening Room.

When I asked her what she misses about Montana, she mentioned that local shops and co-ops there carry shampoo and conditioner in bulk, and she hasn’t been able to find that in Bloomington – so if you know of someplace that offers this, let her know! She also talked about the people in and around Missoula, who are especially friendly and warm – a mix of outdoors people, park service employees, and people who work multiple odd jobs for part of the year so that they can devote themselves to doing what they really love the rest of the time, such as outdoor adventures. Jaci said she admires that spirit.

You’re wondering what I was foreshadowing when I mentioned “extremities” earlier (I know you were!). Well, Jaci is a runner – and not just any old runner. She participates in “ultras,” which is any running event longer than a marathon. This past October she ran a 100K (100 kilometers is 62.1371 miles, according to Google… if you started running from the Wells Library, that would take you about to Keystone at the Crossing on the north side of Indy).  That was “the Hootenanny” in Missoula; she loved the experience and plans to go back to Montana and do it again in order to remain a part of that community. Upcoming, she has a fifty-mile race and a 100K relay on her calendar. 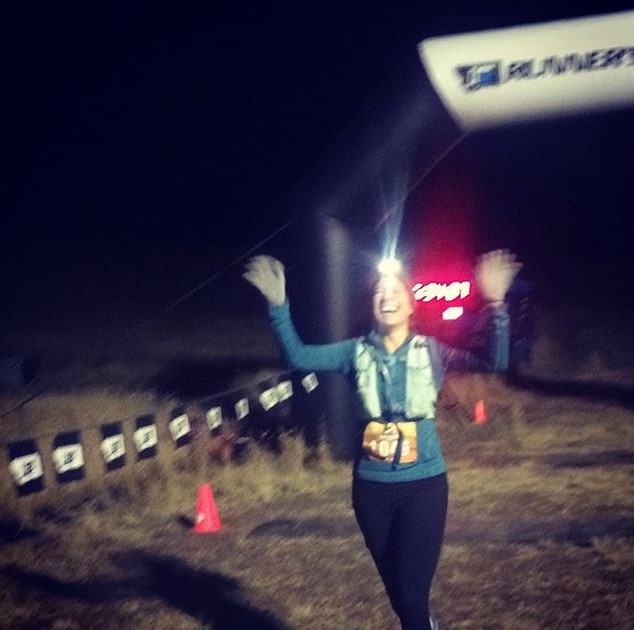 Y’all might need to catch your breath a bit at the thought of running for 15 hours and 34 minutes, which was Jaci’s time in the Hootenanny. (And it’s Montana, so the course is not flat.) I know I’m feeling a little winded just typing this! She says that she isn’t interested in running as competition so much as she just enjoys it for her own wellness, and she is also interested in the science around health and fitness awareness.

I also asked Jaci about her hopes and fears around her new position here at IU. She said she is especially excited about being enveloped in the “well-developed systems and services” here; in her previous job she had to break a lot of new ground and start things from scratch, but here in the IU Libraries she sees a more mature UX-thinking mindset, and she is looking forward to building on that momentum. She seems pretty fearless to me, but when pressed, she said that her biggest fear as the incoming head of DUX is of not being an effective communicator (which to her means most especially being an effective listener).

Lastly, Jaci is a tea enthusiast, and has plans to set up a tea station in her office. She invites colleagues to stop by – the kettle will be hot!

(You might want to touch base with her first. Many of us have already laid siege to her calendar – so. many. meetings!)

Revisit past installments in The Faces of DUX to learn more about current and past members of the department.