Some books really get around. 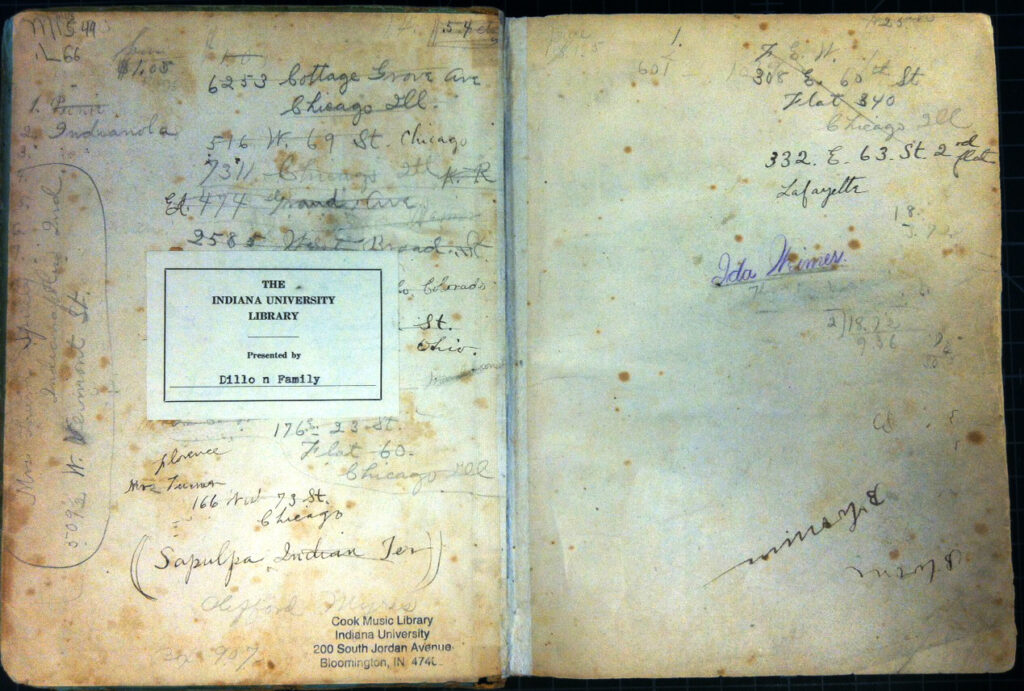 Front endpapers of the Progressive Glee and Chorus Book

A book’s life history may be of great interest (see, for example, the Book Traces project). Or it may be just a curiosity. Sometimes I feel I am a bit of a dilettante, more interested in the package than the contents. But I suppose that goes with the territory.

Books contain information of different kinds. There is the intellectual content, or “message,” and the physical container, or “medium.” The medium conveys information also. It may be closely tied to the message, or informative about the context and time in which the work was produced.

In addition to the kinds of information present in a book when it was first produced, the physical evidence of a book’s life history, added over time, may also be of value, whether connected or not to the book’s original purpose.

In “Preservation, Library Collections, and the Concept of Cultural Property” Paul Banks describes the “duality” of medium and message, and identifies the challenge this presents for libraries: “The point at which discourse must begin is the difficult question of the relative significance, usefulness, and importance of medium and message. [1]”

An extraordinarily well traveled book arrived on my bench recently from the circulating collection in the William and Gayle Cook Music Library. Its package was very interesting to me, though perhaps less so to the Music Library, where the value was its intellectual content. 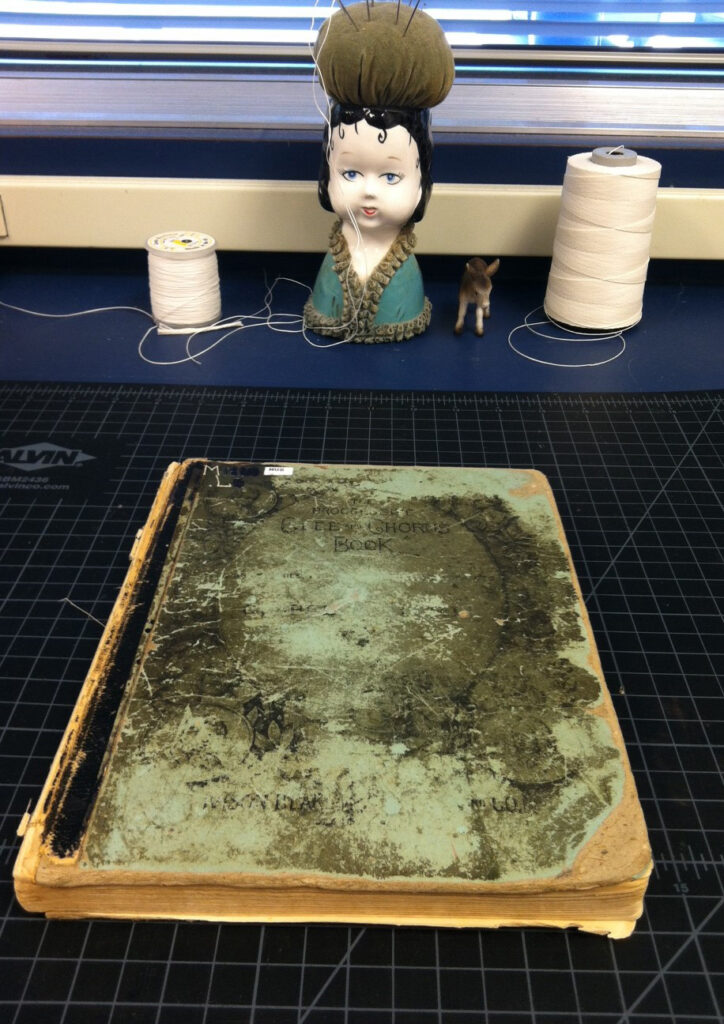 The progressive glee and chorus book : consisting chiefly of music selected from the best German, English, and Italian authors … : adapted for use in high schools, advanced singing classes, and musical societies / arranged and composed by George B. Loomis. — New York : Ivison, Blakeman, Taylor and Co., 1881, c1879.

The wear and structural damage are evidence of this book’s use. The illustrations and text on the green paper cover are mostly worn away, and what remains is barely legible because of the embedded grime. Compare the image above to the one below of a copy in better condition in HathiTrust.) 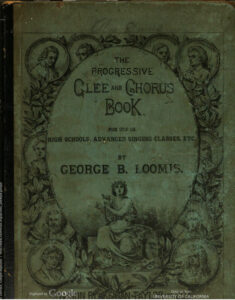 Cover of another copy in HathiTrust

While the cover indicates a little something about this book’s life history, the inside of our Progressive Glee and Chorus Book contains a world of intrigue. Upon opening the book, my first observation was that all the wear most likely occurred before it ever entered the Music Library’s collection – 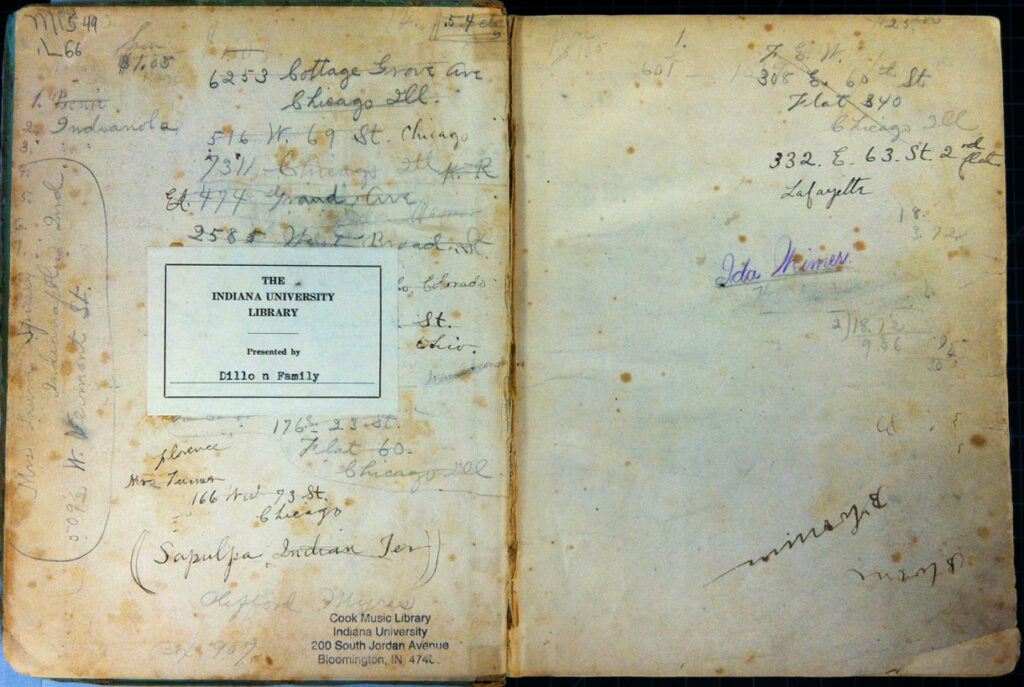 The bookplate and its placement on top of some of the inscriptions made that clear.

Then I started reading all the inscriptions. I counted 23 addresses, some with names, all over the endpapers! Many are from Chicago; others are from Bloomington, Lafayette, and Indianapolis, Indiana; Columbus and Marietta, Ohio; Sapulpa Indian Territory and Shawnee, in Oklahoma; and Rogers, Arkansas. Were these addresses of the previous owner(s)? Or were the endpapers used as an address book of sorts? Or something else? 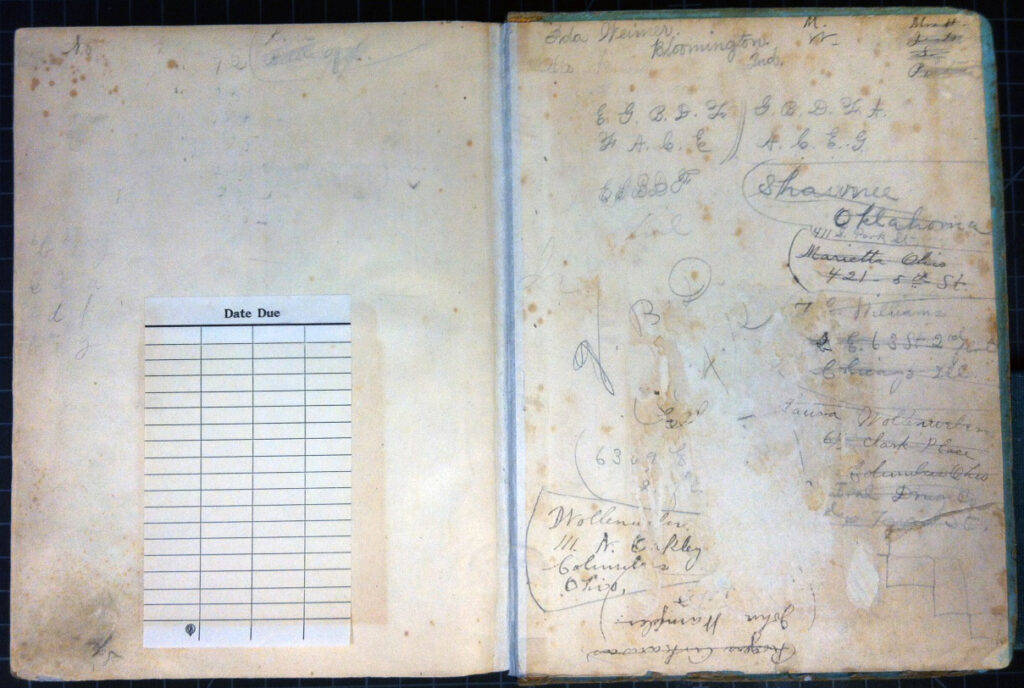 The end papers in the back also contain mnemonic devices for remembering musical notes:

For example, EGBDF = Every good boy deserves favor, is the mnemonic for the notes on the treble clef.

I searched for some of the name/address combinations and found little tidbits of information (via Google and the Libraries’ subscription access to Indiana newspapers in the Newspaper Archive). For example, I found a mention of Laura Wollenweber in our local Bloomington, Indiana paper, the Herald Times, in an obituary for her daughter, Mary Elizabeth Neal, who passed away in 2006 at the age of 101.

But when I searched for the name Ida Weimer, the only Bloomington, Indiana name and address, I found more than I’d bargained for.

Mark of ownership on back endpaper, “Ida Weimer, Bloomington, Ind.”

It turns out that in 1902, Ida Weimer was the unfortunate victim of a terrible attack. She was walking home from her job as an operator at the telephone exchange one Friday evening, and was attacked on College Avenue near the “old college campus.” This is the headline of the first report in the Bloomington Courier: 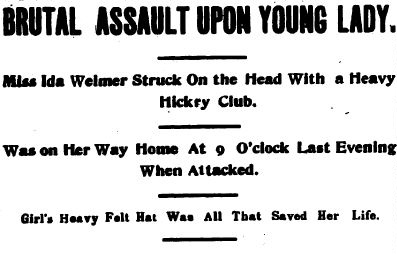 The story made the front page of the paper several days in a row, and was also reported in newspapers in other Indiana cities, as well as some in Ohio and Kentucky.

A follow-up story in the Bloomington Courier 1 ½ years later on January 26, 1904 indicated that the case was never solved:

“It was recalled today that the brutal assault on Miss Ida Weimer in this city a year ago, is almost parallel in all Its details with the terrible crime at Bedford, which is scarcely 25 miles from here, and has given rise to the question whether the same assailant might not have committed both crimes. Miss Weimer was employed at the local telephone exchange. She was deeply religious, and was not known to accept the attentions of any young men. She was popular and was not believed to have an enemy in the world. One evening as she was returning to her home at supper time, she was attacked by an unknown person as she was passing through the old college campus. It was quite dark. She was suddenly struck on the head with some blunt instrument, and was beaten about the head and body and left for dead. There was apparently no attempt at criminal assault, and no motive could ever be learned for the crime. Miss Weimer was found when a searching party started after she had not returned home. She was removed to her home and hovered beneath life and death for several weeks. When she finally regained consciousness she could throw no light on the crime. She never fully recovered, and is today partially paralyzed as the result of the brutal attack.”

When I began poking around for information about the names inscribed in this book, it was just an abstract curiosity. But when I read the follow-up story, I instantly connected this to very recent unsolved cases of missing or murdered women in our city, and the “story” suddenly became much more real.

So much for curiosity.