On November 20th, 2011, the Indiana University Libraries Film Archive (IULFA) was admitted into the International Federation of Film Archives (FIAF). To date, only 17 film archives in the United States are FIAF members. This blog post will discuss what FIAF is, a brief history of FIAF, and IULFA’s member status is a big deal.

FIAF was founded in Paris in 1938. Initially there were only 4 members. Though we might think of film preservation and archives as a more recent phenomenon, there was already a concern among cineastes, curators/programmers, filmmakers, and critics over the life of film. These sentiments had already existed in the 1920s. The Library of Congress and the Museum of Modern Art (NY) took an interest in film, adding them to their collection while 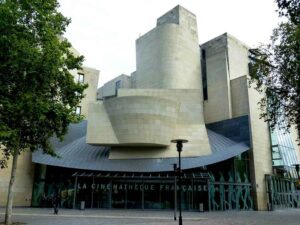 The exterior of the Cinémathèque Française

cinema was still a young medium. The original four members that banded together in 1938 included the Museum of Modern Art, the Cinémathèque Française, the British Film
Institute, and the Reichsfilmarchiv in Berlin (however, this archive was ransacked by Soviet troops in 1945). Since its conception in 1938, the organization has expanded its membership to archives in over 75 countries.

Simply having a collection is not enough for inclusion into FIAF. In addition to collections, archives should have some kind of long-term and developed plan for preservation. This would include proper storage facilities. IULFA’s collections reside in the Auxiliary Library Facility. Because we have our collections in an environment that will prolong film’s life for 250 years we have one of the best archival storage facilities among FIAF members.

FIAF also encourages greater interaction and cooperation within the archival world. They are engaged in issues of film preservation and restoration, digitization, and access. Every year FIAF organizes the Annual Congress where members come to formally discuss business and participate in workshops. IULFA archivist Rachael Stoeltje represented IU at the Annual Congress in Beijing this past spring.  FIAF also publishes the Journal of Film Preservation.

IULFA is honored to be part of such an historically important organization. We are excited to be participants in the global conversation on the role  of film archives and preservation. FIAF membership will also lead other archival institutions to our doorstep. Being a member means we can develop relationships with other film archives and expose people to our collections and state-of-the-art facility.