Howdy!  I’m Tim Wagner, Assistant Film Archivist at Indiana University Libraries Moving Image Archive (IULMIA).  Working on the Media Digitization & Preservation Initiative (MDPI), my role involves comparing multiple copies of film prints to select one (Best Copy) for digitization.  For the past year, I’ve had the pleasure of working with 16mm educational films produced or distributed by Encyclopaedia Britannica Films Inc.  While certainly not the only producer of educational films, Encyclopaedia Britannica Films was the top producer and distributor of educational 16 mm films (and later, video) for schools and libraries from the 1940’s through the 1990’s.  The film prints in the Indiana University Libraries Moving Image Archive (IULMIA), one of the world’s largest educational film and video collections, have been collected from sources all across the nation:

My work with this collection has revealed a variety of interesting historical and technical aspects.  On occasion, I’ll come across one print of a film distributed by Encyclopaedia Britannica Films Inc., and another print distributed by its predecessor, ERPI Classroom Films Inc., with the same copyright date credited to both companies. 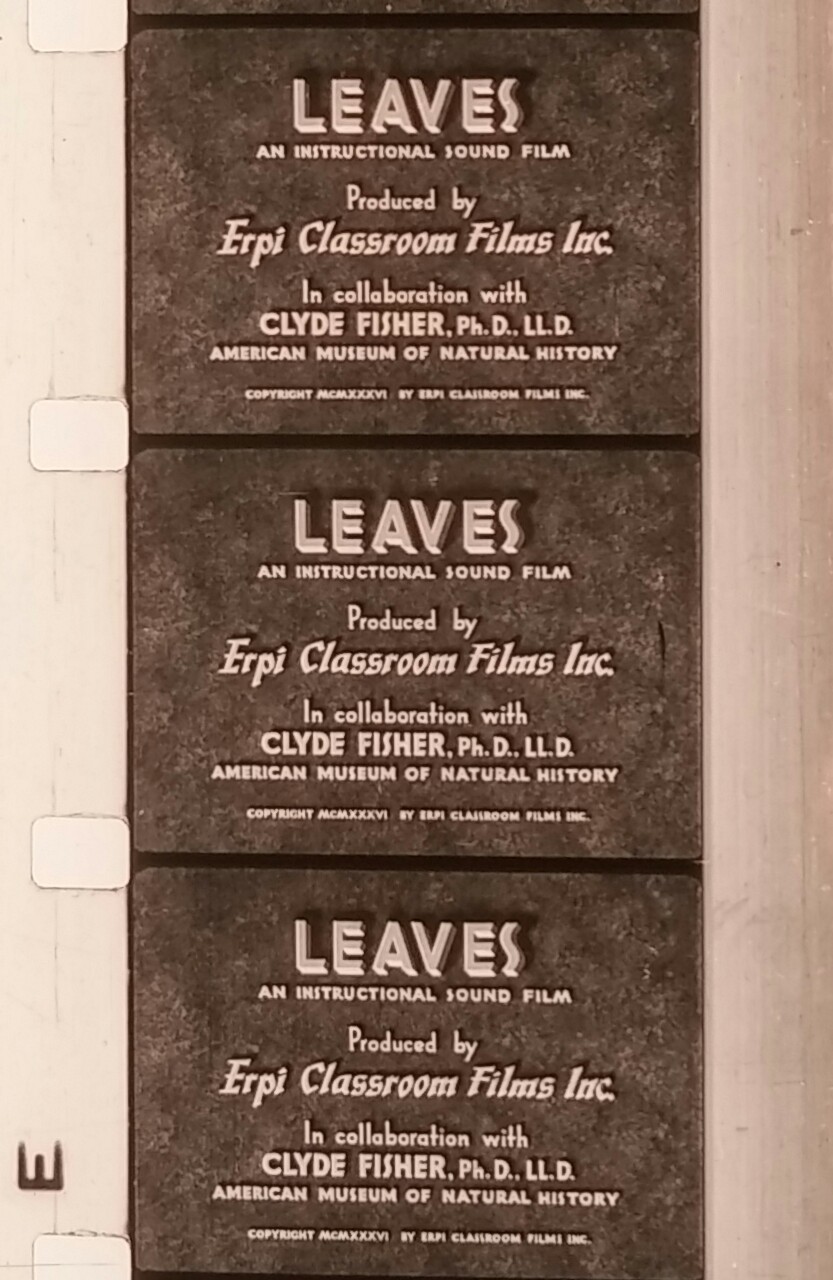 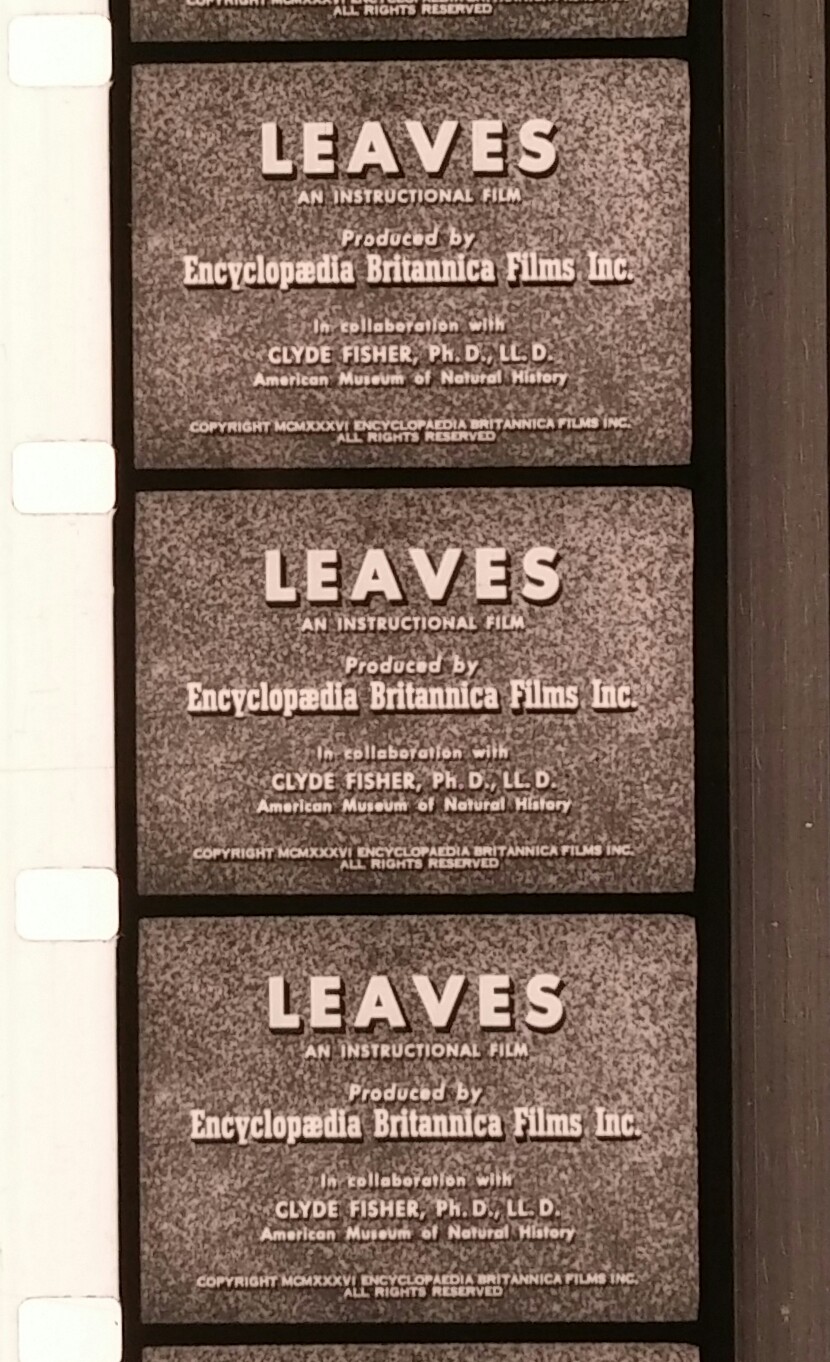 ERPI Classroom Films grew out of the organization responsible for the marketing and installation of sound film equipment in commercial movie theaters, Electrical Research Products Incorporated (ERPI).  A division of the Western Electric Company, ERPI first conceived of an educational department in 1928 to explore the use of sound motion pictures in schools.

When comparing multiple prints, I weigh a variety of factors to determine Best Copy.  Due to the large number of duplicate prints and the time constraints of the project, I restrict my review to the first one-hundred feet or so of each reel.  Running the 16mm prints through a multi-gang film synchronizer, I document the:

When choosing a Best Copy, I factor in the completeness of a print (within the range of footage which I have reviewed), color fade, the number of film stocks and splices, the consistency of density and contrast, or color fade, across multiple film stocks, film damage, and the appearance of scratches.  Since the Encyclopaedia Britannica films were quite popular, and not always projected by skilled hands, the film prints present much evidence of wear and tear to consider.

Some of the Encyclopaedia Britannica films were released in both black and white, and color versions.  When comparing four 16mm prints of “MEXICO, The Land and The People (Second Edition, People of Mexico)”, copyright 1961, I found different color appearances on each print.  A print on GEVAERT film stock was black and white.

Another print on EASTMAN film stock exhibited no color fade.

Some of the titles distributed by Encyclopaedia Britannica Films were produced through other companies, as is the case with “Ocean Liners”, a silent teaching film, copyright 1930.  I reviewed three prints of this silent film, printed on double perf film stock.  Two black and white prints were distributed by Encyclopaedia Britannica Films, with a generic 1930 copyright text.  One yellow tinted print was distributed by Eastman Classroom Films, with a 1930 copyright by Eastman Teaching Films, Inc.  This film is a great example of films which document work processes that few folks have access to.  How many people get to see how an ocean liner is manufactured?  As I reviewed the prints, I enjoyed seeing the various skilled and labor-intensive tasks involved in the construction of an ocean liner.  The massive scale of this endeavor is a real treat to witness! 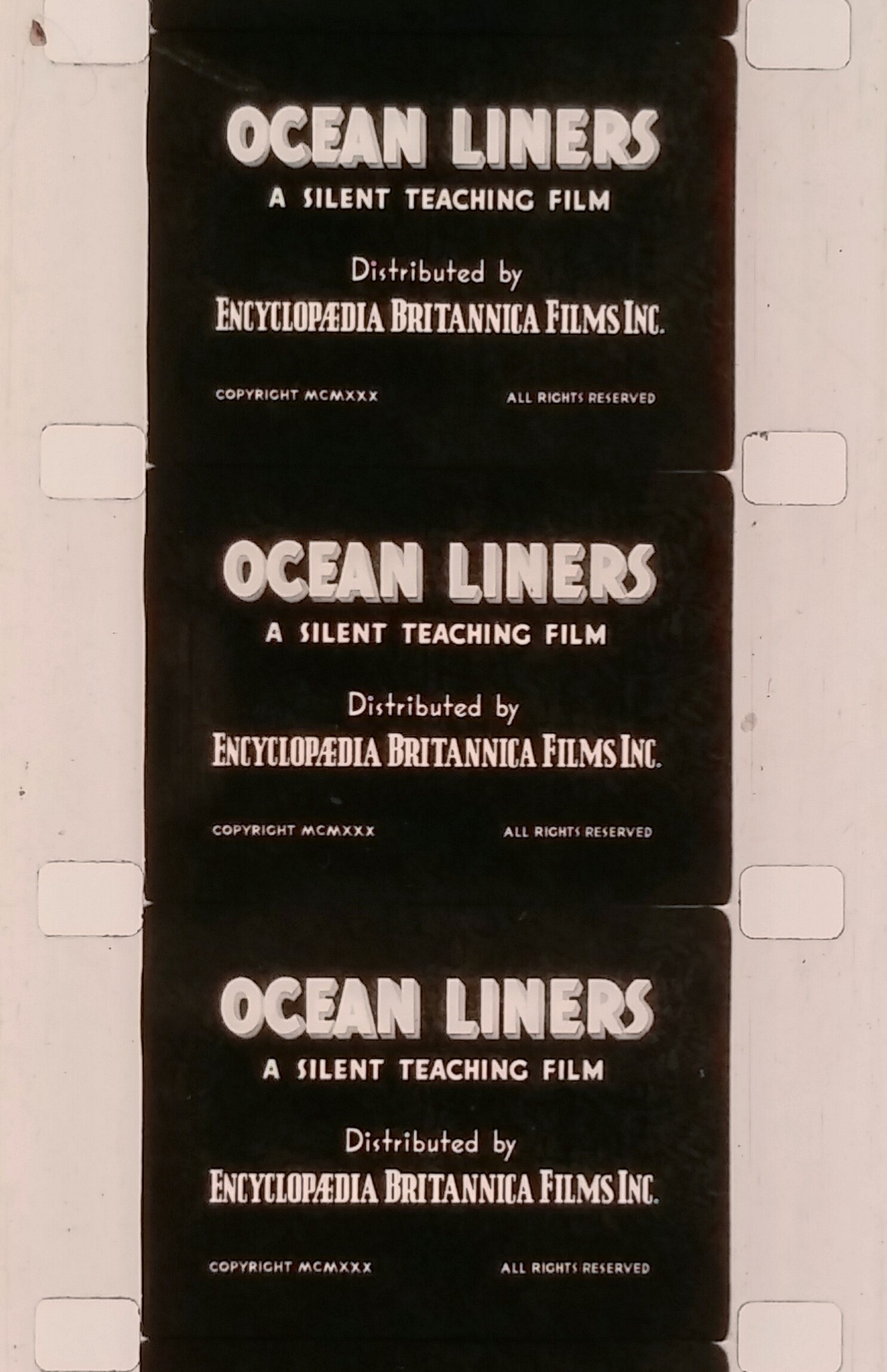 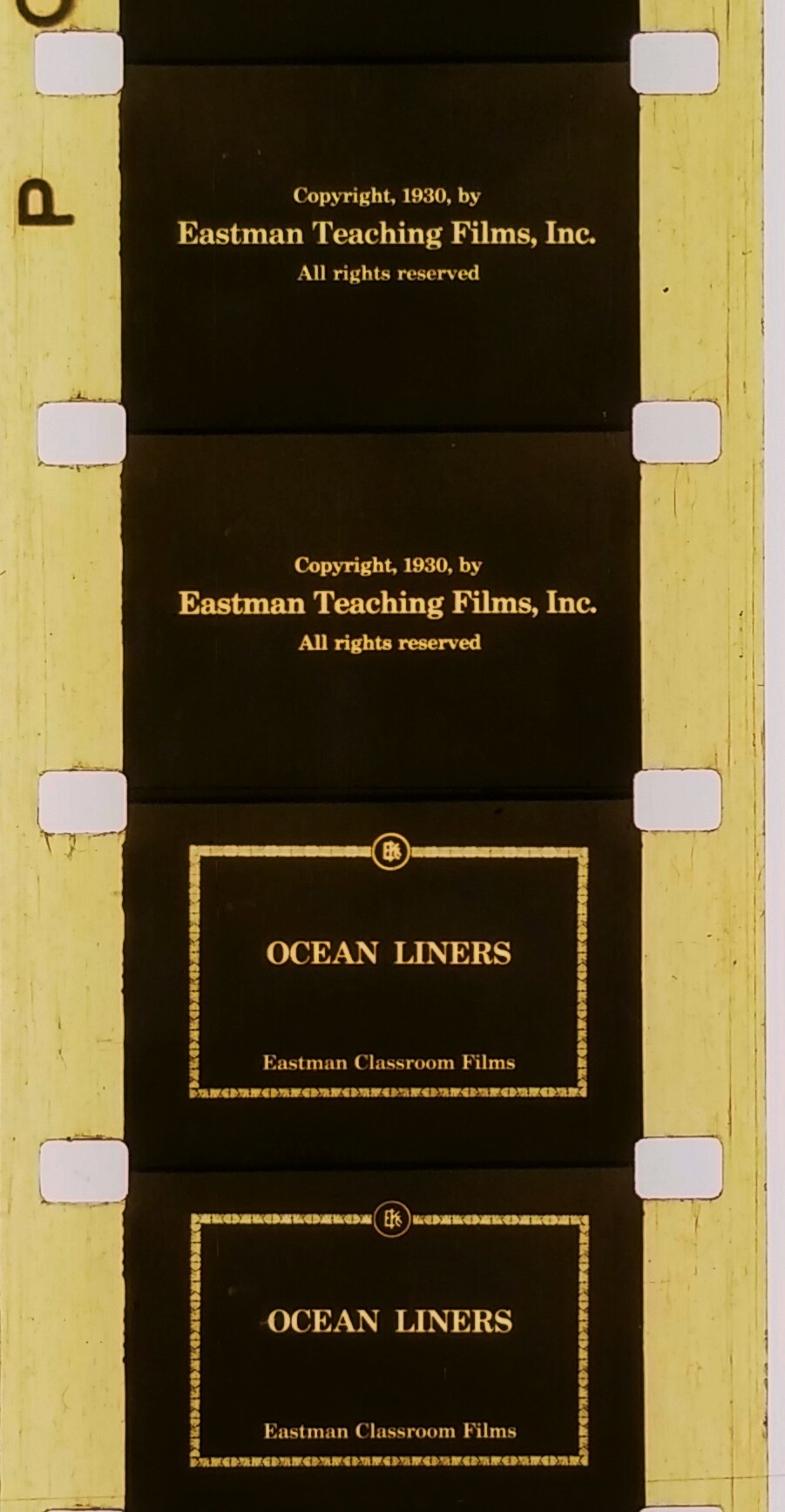 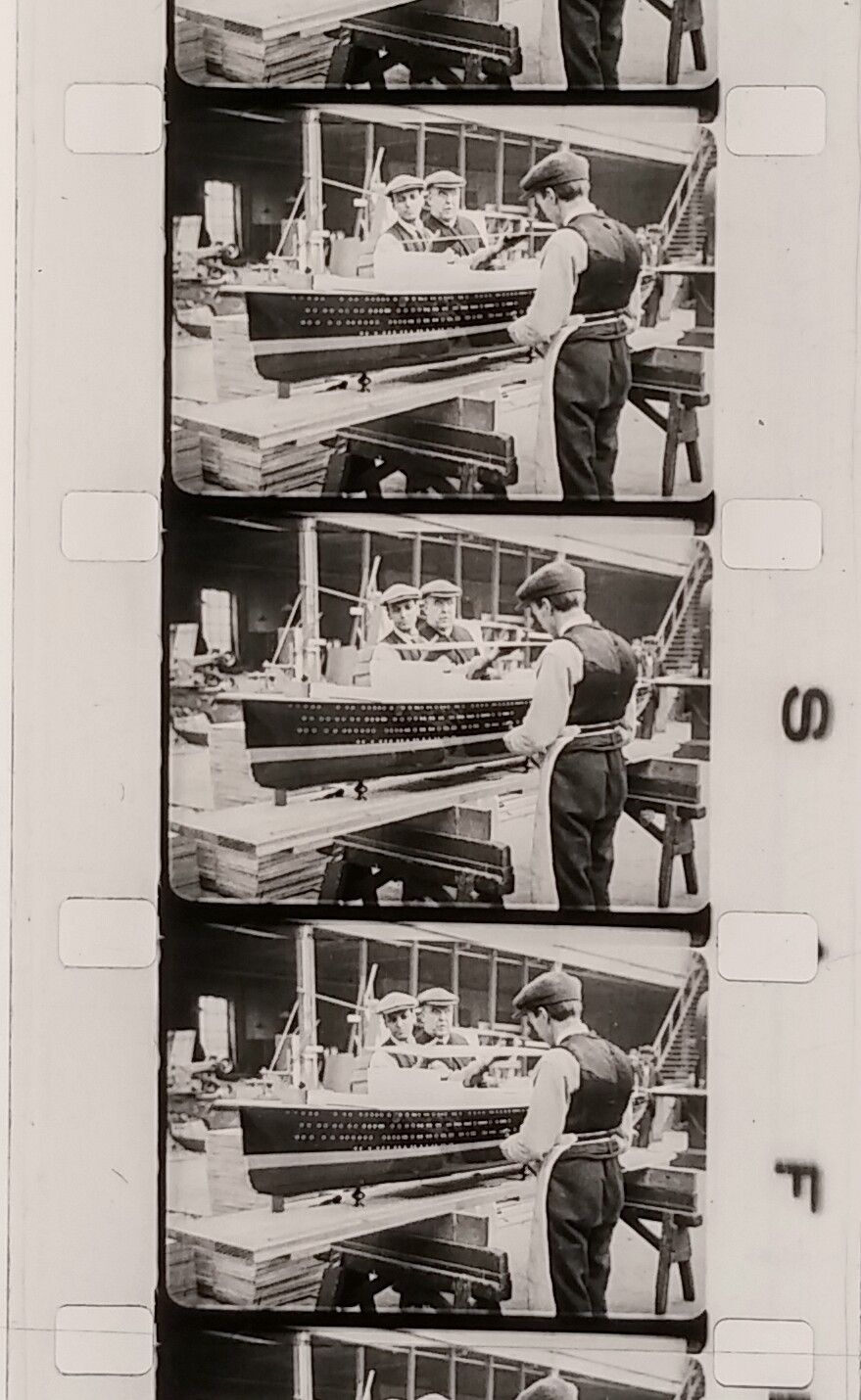 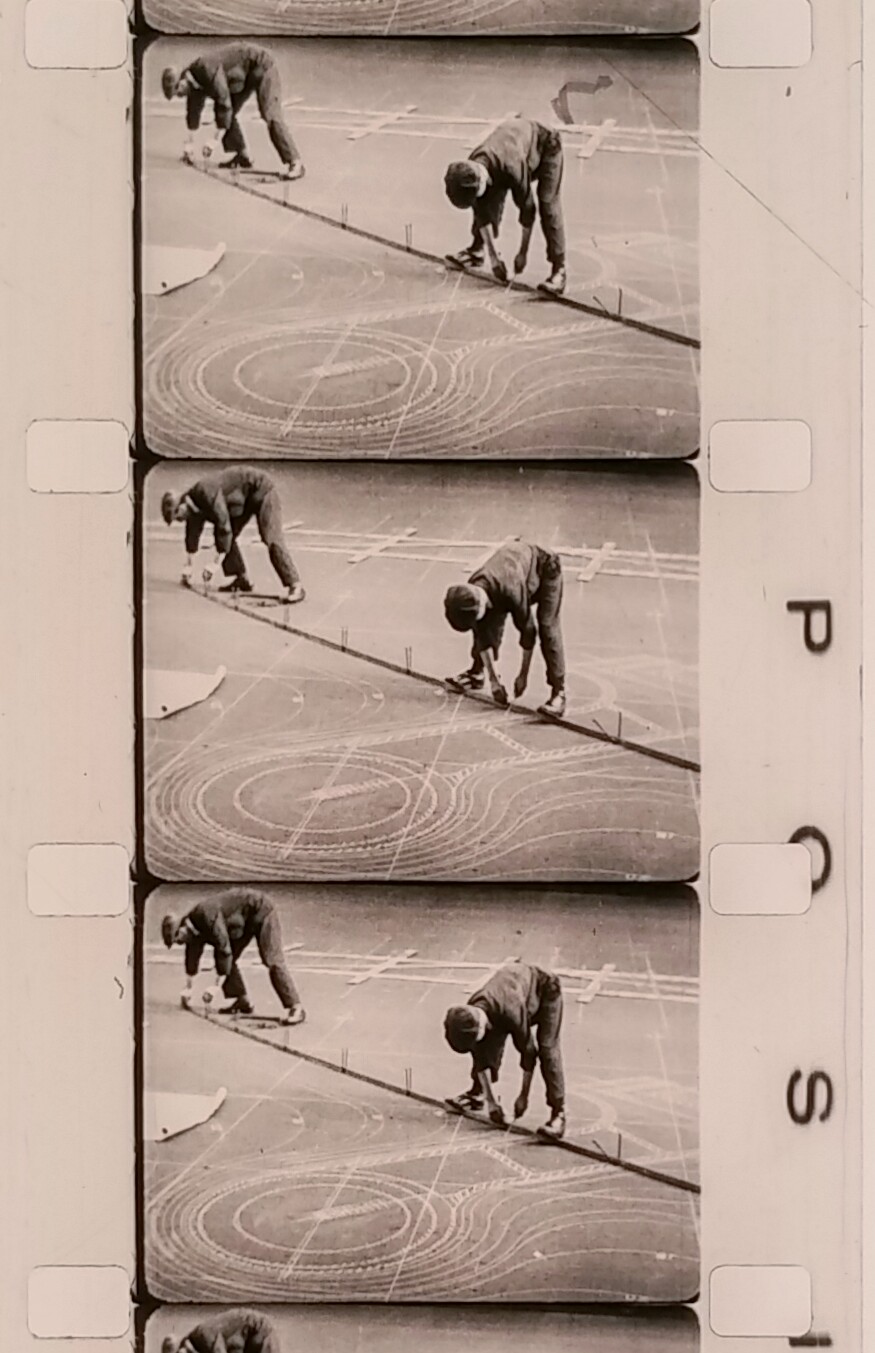 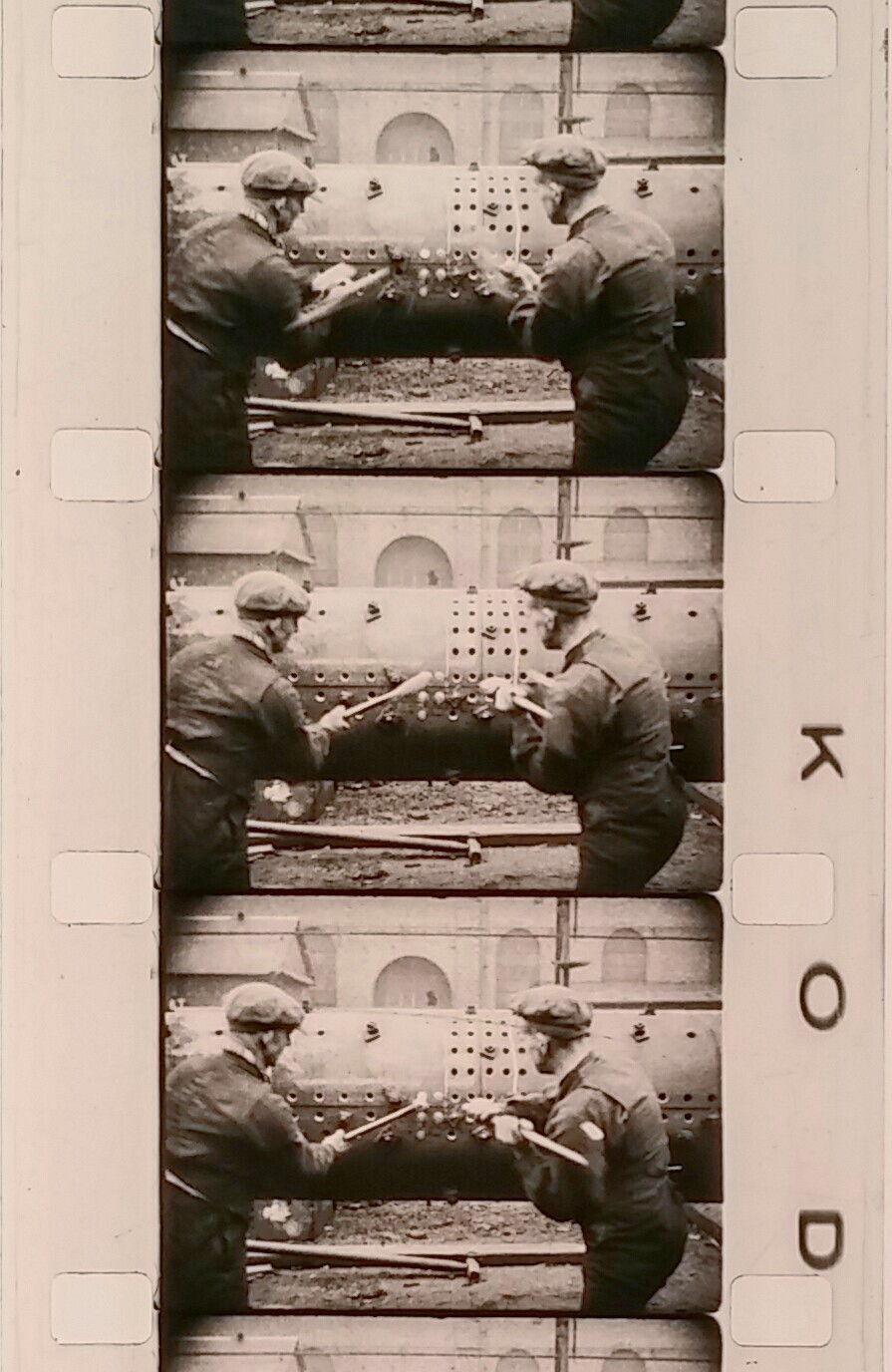 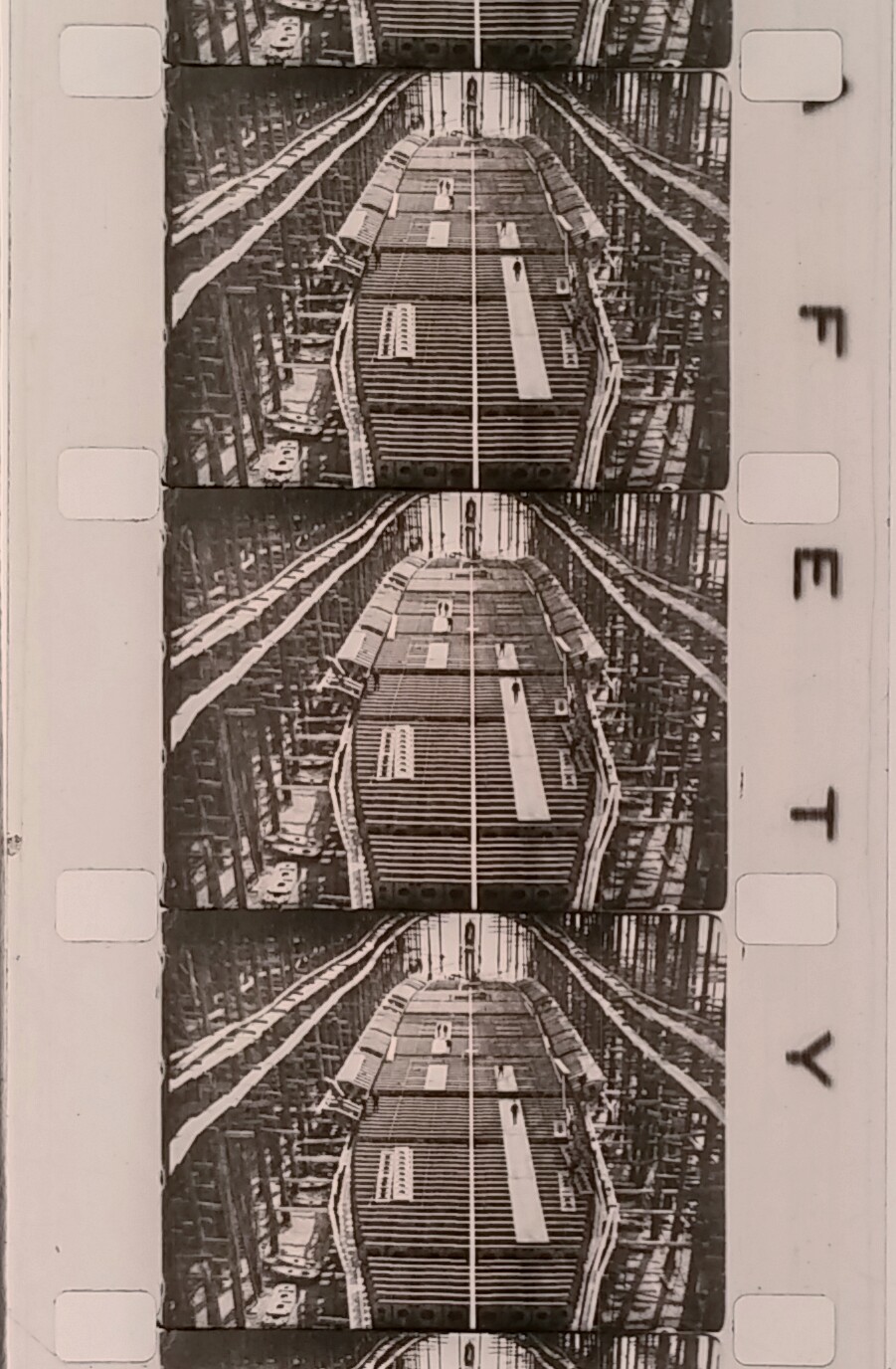 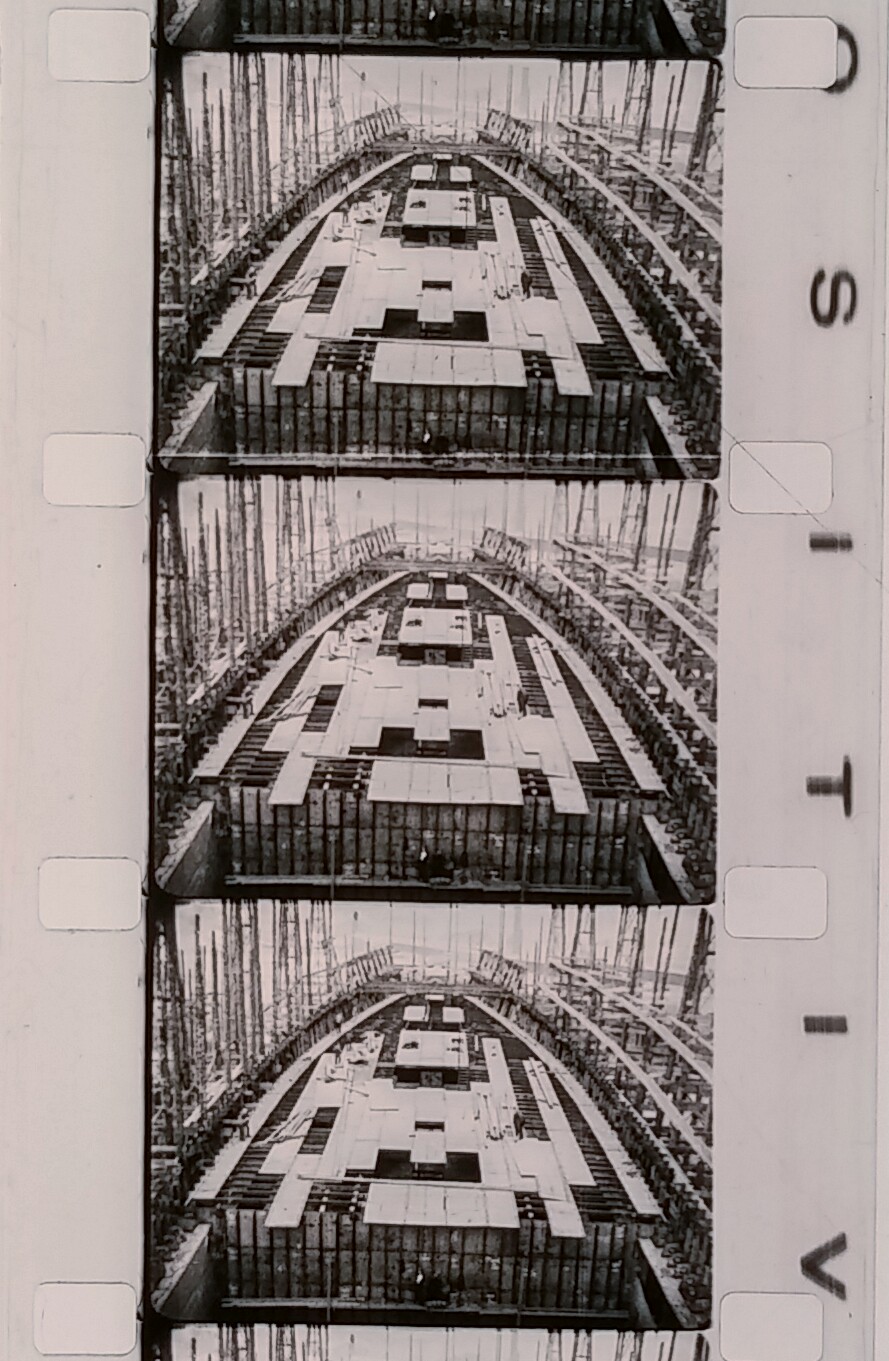 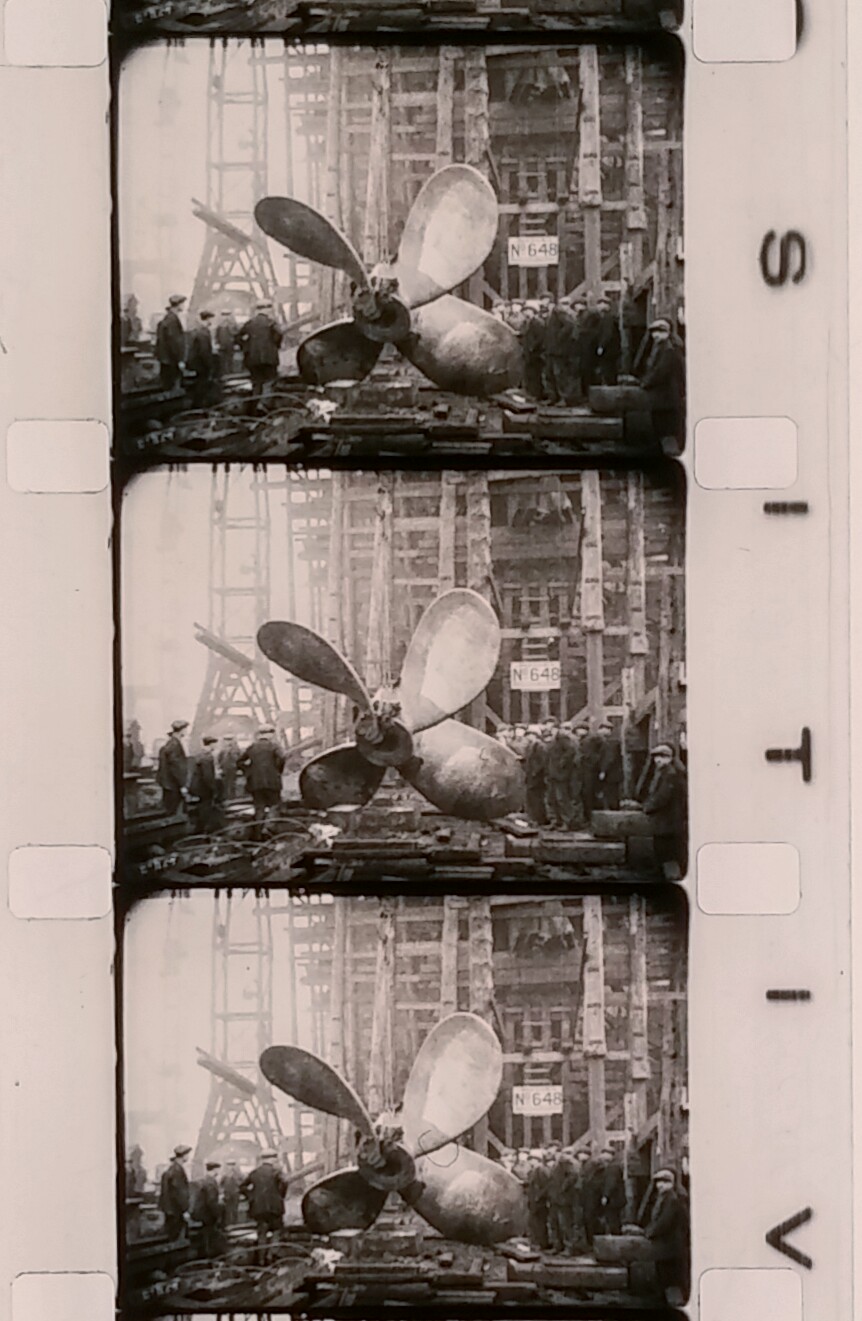 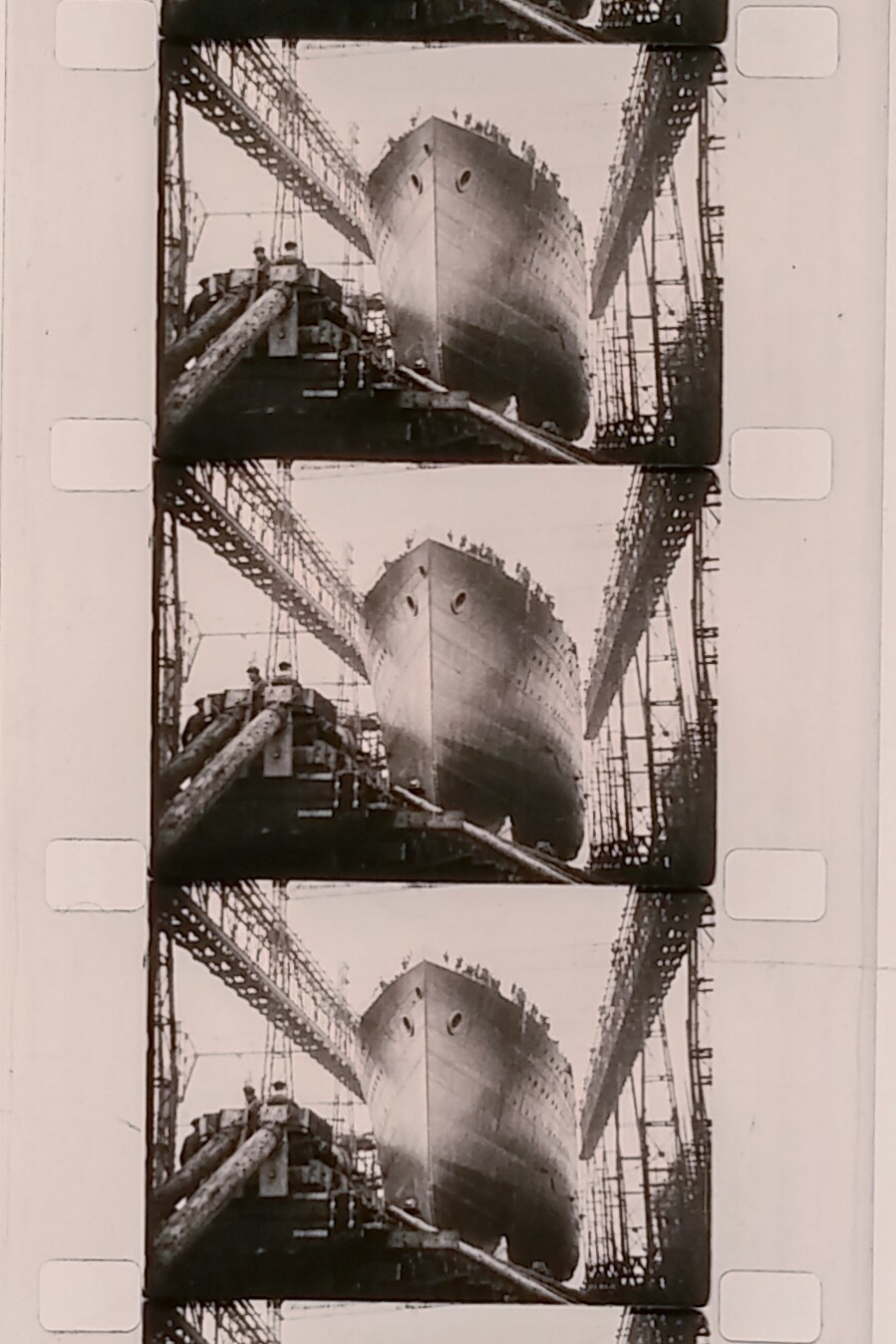