Have you heard of the naval ship the U.S.S. Indiana University?  Well it did exist, and it was “docked” right here in Bloomington, Indiana. Indiana has always had a rich history of aiding the United States in times of war dating back to the Civil War when Indiana University began a military science program.  During World War Two Indiana University instituted multiple programs to aid in the United States war effort.  The administration organized the Medical Administrative Corps which allowed for students between the ages of 18 and 45 who were enrolled in the medical and dental schools or enrolled in either pre-medical or pre-dental programs to be exempt from being called by their draft boards.  They also organized a quartermaster corps unit and a civilian pilot training program, which was previously written about on this blog.

While the civilian pilot training project did not come to fruition, a brighter program was on the horizon.  The Naval Training school got its start in 1940 when Indiana University administrators saw the success of the N.R.O.T.C. program at Northwestern University.  However, in order to get such a program at IU the administration would have to make some changes to its current curriculum.  One of the first things that needed to be done was the introduction of Naval V-1 training for freshmen and sophomores.  This gave the sophomores and freshmen  admitted in the program two years of deferment and the possibility of advancing to V-7 training program if the students passed a comprehensive exam.

In July of 1942 the Naval training school was officially established when IU welcomed 200 yeomen to campus for four months of training.  The U.S.S. Indiana University officially came into fruition.  North Hall was transformed into a “ship”.  The “ship” contained two-student “cabins” which housed six yeomen and a “sick bay”.  The entire campus was also labeled as the “ship” as well and Bloomington became the “shore”.  The program included courses in general storekeeping, disbursement, provisions, clothing and small stores, aviation, typewriting, spelling, and English and correspondence. 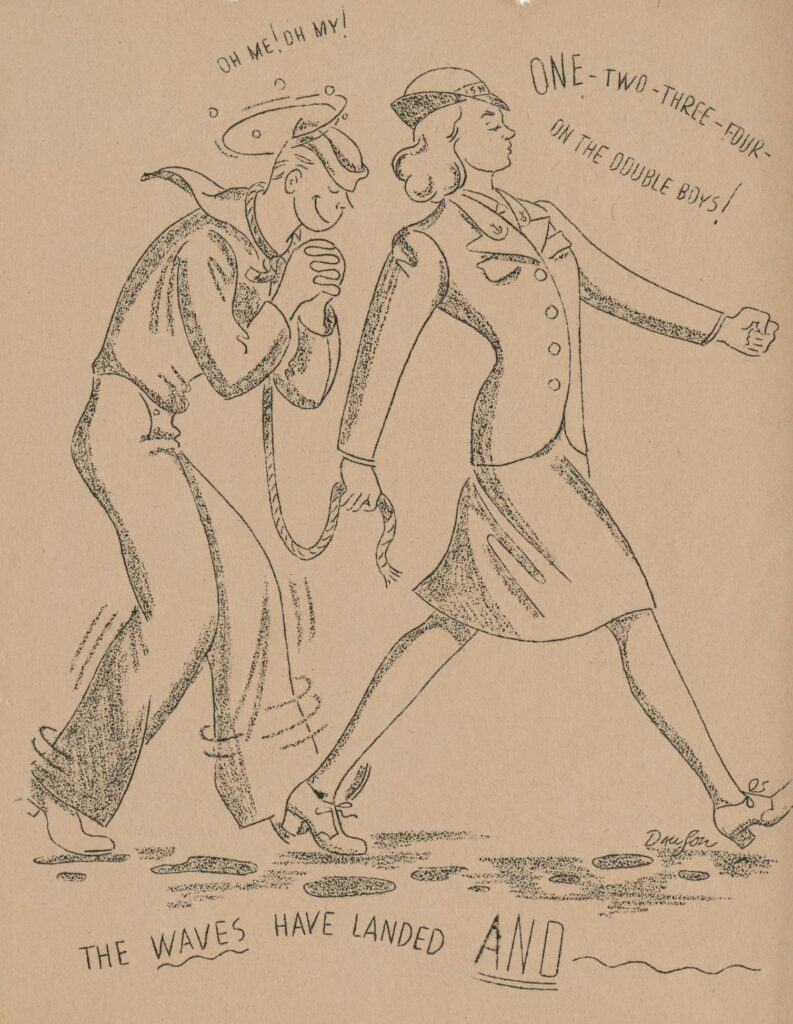 Prior to October of 1942 the naval training school’s primary focus was the training of Navy yeomen, but that would all change.  The program, while still training Navy yeomen, shifted to the training of WAVES, Women Accepted for Volunteer Emergency Service.  The Coast Guard SPARS arrived on campus in June of 1943.  In observing the yeomen publication “The Quill” from October of 1942 there was great excitement from the yeomen in the addition of the Navy WAVES.  One of the top stories in the issue the week before the WAVES arrived was that it had been made official that the WAVES and the yeomen were allowed to date with the headline reading “Men and Female personnel will be able to ‘Enjoy Each Other’s Company’”.  The writers of “The Quill” also made uniform suggestions for the new WAVES and wrote multiple articles and drew multiple cartoons about the impending arrival of the WAVES.  These articles and cartoons added humor to the situation, but they also aided in the excited that the yeomen were feeling about the arrival of females to the program.   In 1944, when the naval training school at Indiana University was officially closed, the school had trained and educated 5,008 yeomen and storekeepers of both sexes.

The students went into the program with a sense of duty towards their country, and they were prepared for the consequences that awaited them once they were called into active duty, but while onboard the U.S.S. Indiana University they were allowed one last chance to be kids.  They published student papers such as “The Yeoman” and “The Quill”.  They participated in concerts, plays, and lectures that were held on campus.  Some even wrote and directed productions including “Tattoo”, a production of original songs, dances, and skits written and performed by the yeomen.  They also had parties, picnics, and socials.  They were allowed to live, in many respects, as college students and experiencing all of the joys and opportunities that exist on a college campus. The Naval training school performed admirably in their training of Navy yeomen, WAVES, and Coast Guard SPARS, but in reading the letters of students to Elvin S. Eyster, the director the Naval School, it is obvious that what they learned had a larger impact on their lives.  It did not only prepare them for work in the Navy, but it gave them skills to achieve careers in the business field as well.  It also planted a seed of further education, with students going forward with their college education.   While the United States Naval Training School at Indiana University is no longer in service, the U.S.S. Indiana University is still sailing.

Interested in learning more? The Archives has had recent additions to the U.S. Naval Training School records – take a look at the finding aid and let us know if you would like further information on anything!