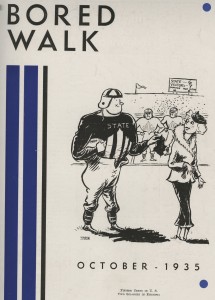 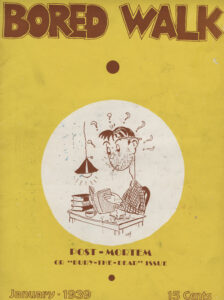 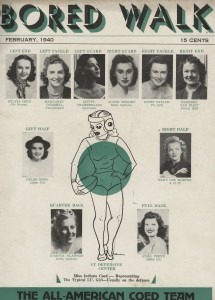 Self-described as “the humerous publication of Indiana U.” the Bored Walk was a humorous college magazine published by students at Indiana University from around 1931 until 1942.  The publication featured jokes, cartoons, and campus gossip and news. Cover art was unique and often featured student artwork. 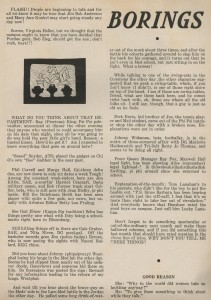 The 1931 Arbutus described the Bored Walk‘s scandal page, “Borings,” as one of its most interesting features, though the content was usually related to campus happenings and may be difficult for today’s reader to fully understand. For example, a “scandal” tidbit from the 1934 remarked that, “Maybe the coeducational system has its good points after all. Fygam Flowers had intended to deny our almy mammy the pleasure of his 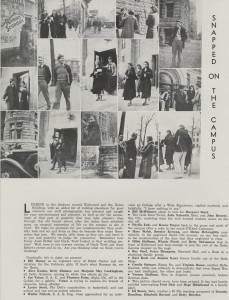 presence this semester. But he met Trydelt Prentice and changed his mind.”  A 1942 Borings report similarly states that, “S.A.E. ex-rod man Neal Gilliatt recently placed his badge for safe keeping in the care of Theta Mary Rees.  If she keeps it as safely as she does her scholastic average, Neal will never more wear his frat pin.”

As is the case with many magazines of this time period, 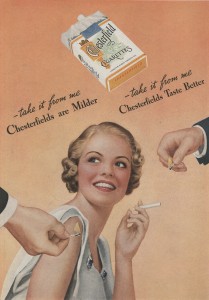 it is also particularly striking that nearly every back cover features a large, colored cigarette ad.  Yet interestingly, in a letter to President William Lowe Bryan, the magazine’s 1935 general manager comments that “A high standard of advertising has been maintained although it has meant the rejection of lucrative contracts for beer and liquor advertising.”  Apparently alcohol was not appropriate for students, but cigarettes were!

The Bored Walk student staff members believed their privately owned and operated publication to be highly circulated, widely read, and much enjoyed.  In 1932, the staff attempted to hand it over to the University in order to ensure its continued publication citing a circulation of 2,000 copies and that subscriptions were not merely for IU students. Subscribers included folks outside the state of Indiana, and that a number of readers were potential IU students and extension students. The Board of Trustees considered the matter, but declined.

In 1942 student owner Meredith Bratton once again tried to sell the publication before he joined the military but IU News Bureau Director E. Ross Bartley opposed the proposition saying, “The parents of our students would not understand how the University would permit some of the things that have been published in the last two years.” Bratton replied that he did not want to hand over management of the Bored Walk, but simply wanted University backing in order to more easily obtain advertising and gain recognition from the merchants bureau of Indianapolis.

Eventually, two students by the names of Bob Anderson and Nat Hill leased the Bored Walk from Bratton. The magazine, however, went into a steady decline following a series of complaints from the Dean of Women, local church officials, administrators, and Bloomington residents over the magazine’s content. The IU Bookstore and Union both cancelled their subscriptions. The October 1942 issue sealed the Bored Walk‘s fate. According to a letter written by Bartley, the offending issue contained several jokes of a sexual nature, some of which included rude remarks against the Catholic Church. Furthermore, a local priest had felt it necessary to report the magazine to higher church officials as material not suitable for Catholics to read. Anderson and Hill shouldered the blame and requested that the University order the cessation of the publication.

IU Comptroller W. G. Biddle wrote to Meredith Bratton at naval training to tell him the news of the publication’s end stating, “It was no longer decent enough to distributed as a product of Indiana University students.” Unfortunately, no copies of the issue in question exist in our collection, so we can’t see the offending articles for ourselves.