The writer David Giffels suggests that living in the postindustrial Midwest means making peace with loss. This idea is so important to him that he titled his 2014 book after it. The Hard Way on Purpose: Essays and Dispatches from the Rust Belt chronicles the plight of finding steady work and personal satisfaction in his native Akron, Ohio, a place known as The Rubber City despite having lost its manufacturing base almost totally over the past three decades.

In conditions like this, Giffels explains, it is easy to lose hope. Yet the residents of Akron and cities like it (for example, Toledo of the glass, Pittsburgh of the steel, and Detroit of the automobile) trudge forward where a less hardy breed might have given up long ago. Giffels describes their stick-to-itiveness as a sense of abiding confidence; “something that allows us to coolly intone, ‘It’s a Rust Belt thing. You wouldn’t understand.'” 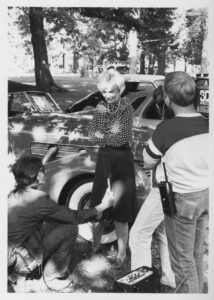 One way of holding on to optimism in hard times is to pull the greatness of the past into some form of public display in the present. The people of Auburn, Indiana, are masters at this. Their Auburn, Cord, Duesenberg Festival is an annual celebration of local automotive history, and it is a benchmark on the civic calendar. Every August, crowds in the hundreds of thousands travel to Auburn to admire the classic cars–the Cord, the Duesenberg, and the namesake Auburn–that were manufactured there in the early twentieth century. Though the factories are gone now, their sleek products remain the showpieces of the festival’s parade and car shows. 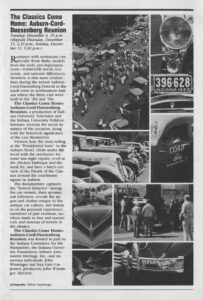 While this is somewhat standard fare overall, it is unique among the folklore resources made available by the Archives so far this year. Previous collections have been international in scope, as with the study focusing on Hungarians in the United States, or the investigation of Spanish folk poetry in South America. The project at hand does not wander so far afield. The city of Auburn, just north of Fort Wayne, is in the Folklore Institute’s back yard. It is not exotic to those of us who grew up in the Midwest. To the rest of the world, however, Auburn’s celebration of automotive heritage illustrates the unique local devotion to a revered past. By alluding to a common history, the Auburn, Cord, Duesenberg Festival helps to establish a sense of community identity when factory work no longer defines what most people do with their everyday lives. This is precisely what folklorists mean when they use the word heritage. It is the commemoration of yesterday through exhibition, re-enactment, or pageantry today.

I understand the desire of the people of Auburn. Growing up in a town not far from Akron, I watched each year as a group of festival organizers erected and lit a 18-foot, gas-fueled kitchen match on the town square. The effigy, kept burning for one week every June, commemorated the local match factory whose early-twentieth-century heyday gave our town its cultural emblem. (Do you happen to remember Ohio Blue Tip Matches? That was us!)

My tongue is only partly in cheek as I share these memories. I see how easy it might be to take potshots at Midwesterners. With the economy being what it is, we would sanctify a distributor cap if it gave us a reason to feel good about where we’re from. “Give us something to root for,” Giffels writes. “We’ll take anything.”

At the same time, I value any attempt to connect with locality. To inhabit a place, perhaps, is to have a dwelling, a commute, and a social network. Yet to live in a place–a much more nourishing proposition–is to have a home, a handful of shortcuts, and dear friends. Annual festivals are handy tools for framing and encouraging community life of this kind. Such forms of heritage make us feel like we belong somewhere. They colorfully articulate our shared culture, and they remind us to pay attention to what is local, lest we miss out on the common ground beneath our feet.

The finding aid for the Auburn, Cord, Duesenberg Festival project records is now online. For access to the collection, call or email the Archives at (812) 855-1127 or archives@indiana.edu.